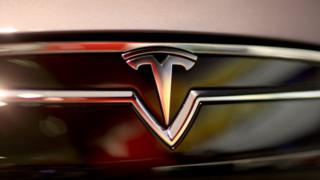 Tesla has launched a software update for its vehicles - enabling the cars to have an "autopilot" mode.

While not fully self-driving, the software means the Model S and new Model X can "automatically steer down the highway, change lanes, and adjust speed in response to traffic".

However, Mr Musk said users adopting the software - available in North America from Thursday - should exercise caution while using it.

"It should not hit pedestrians, hopefully," he told the media. "It should handle them well."

He added that if the car is involved in a collision, the driver is still liable.

"The driver cannot abdicate responsibility. That will come at some point in the future."

Other regions of the world would be updated in the next couple of weeks pending regulatory approval.

The software uses a combination of cameras, radar, ultrasonic sensors and mapping data to determine its position and navigate.

When the car has arrived at its destination, it is able to scan for an available space and park itself.

Unlike Google, which is aiming for a fully-autonomous vehicle, Tesla's approach is to gradually introduce features which take away the need for drivers to carry out certain functions.

Currently there are limitations to the software which would improve over time, Mr Musk said.

"If there's heavy snow it's going to be harder for the system to work, so we'd advise caution.

"Essentially it's like a person - how well can a person figure out what route they should take. Over time it will be better than a person.

"Long term it will be way better than a person. It never gets tired, it's never had anything to drink, it's never arguing with someone in the car. It's not distracted."

Other car manufacturers such as BMW and Volvo are also developing, and implementing, autonomous features to their cars.

Google's entirely self-driving car has clocked up well over one million miles on public roads, mostly in California.