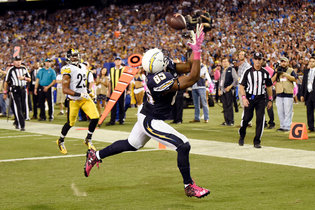 The suspensions of @Deadspin, the account for a sports blog owned by Gawker Media, and @SBNationGIF, an account for the Vox-owned SB Nation website, brought to the fore an ongoing dispute over whether the highlights are fair game for publishers.

Using GIF animations and Vines, which are six-second looping videos, the two Twitter accounts react quickly during games to bring their hundreds of thousands of followers key plays and bloopers.

Agencies representing the N.F.L. and Ultimate Fighting Championship filed complaints against Deadspin, according to Twitter. Takedown notices against SB Nation were filed on behalf of two major college football conferences, the Big 12 and SEC.

@Deadspin was suspended at about 5:30 p.m. Eastern time and returned around 7:45 p.m. after Gawker Media appealed to Twitter.

On Tuesday, @SBNationGIF remained offline. In an email, Fay Sliger, a spokeswoman for SB Nation, said that the company tries “to keep our use of unlicensed third party footage within the bounds of fair use,” and that it was working with Twitter to restore the account.

John Cook, the executive editor at Gawker Media, said the company received 18 copyright notices from Twitter regarding 16 Deadspin tweets. Those tweets were not taken down, but Twitter stripped them of GIFs containing N.F.L. highlights.

The N.F.L. said in a statement on Monday that it had asked Twitter to disable links to “more than a dozen pirated N.F.L. game videos and highlights.” But it added: “We did not request that any Twitter account be suspended.”

The animations and videos have helped attract new followers to the accounts on Twitter and visitors to the publishers’ websites, but neither publisher owns the footage.

It’s not the first time SB Nation has been reprimanded for its use of video on social media. During the World Cup in 2014, ESPN and Univision complained about SB Nation’s use of highlights, according to The Wall Street Journal. SB Nation received suspension notices from Twitter and had several of its Vine accounts taken down.

Before the professional football season began, Twitter and the N.F.L. announced a partnership to push game highlights and recaps to the social network as the league sought to expand its reach beyond traditional outlets.

For some who enjoy the highlights posted by @Deadspin and @SBNationGIF, the moves on Monday came off as heavy-handed.

Others questioned the ethics, if not the legality, of using and modifying the videos.