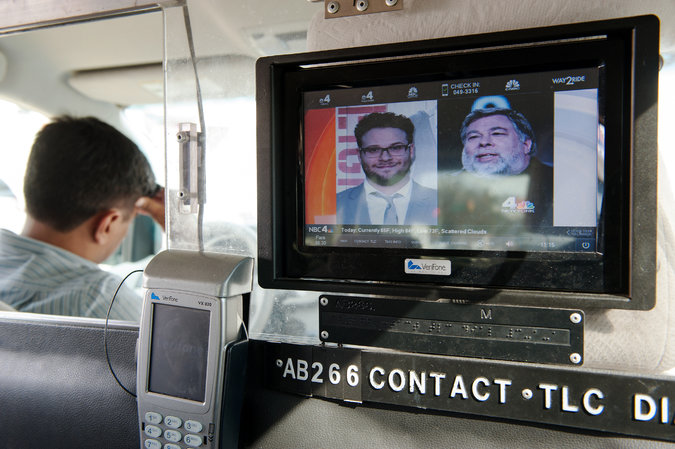 A Taxi TV screen plays in the back of a New York City cab on Tuesday.Credit Bryan Thomas for The New York Times

First comes the immutably loud chime. Then the bright welcome message illuminates the screen. And these days, the inevitable ad is for the new Tom Hanks film, filling the back seat with the movie’s thumping score.

For nearly a decade, the Taxi TV has intrigued and amused, but mostly annoyed, New Yorkers, disrupting the start of what should be a respite from the outside world with an inescapable incursion of sounds and sights. Along with subway delays and bridge tolls, the screens might top the list of city transportation complaints.

But the monitors, which double as credit card payment consoles, could soon be muted for good.

The city’s Taxi and Limousine Commission plans to vote Thursday on a pilot program that would remove the Taxi TV from some cabs and replace it with more modern — and less intrusive — technology. One possibility may be that taxi drivers hand passengers a smartphone or a tablet with a credit card reader to collect the fare.

The program would for now be limited to 4,000 vehicles out of about 13,500 yellow taxis, but officials say the goal is to eventually retire the Taxi TV altogether. The commission said the repetitive programming and balky mute and power buttons have led to lots of complaints from passengers and drivers alike, and may account for people abandoning yellow cabs for Uber and other services.

“It repeats itself constantly, and it’s just noise for no purpose,” Karen Hrycyna, 55, of North Brunswick, N.J., said on Tuesday morning as she waited for a taxi outside Pennsylvania Station.

Largely a mix of movie reviews and advertisements for Broadway shows, some taxi clips have been more memorable than others. Cat Greenleaf’s celebrity sit-downs on her townhouse steps on “Talk Stoop” became a staple. But a video starring David S. Yassky, then the taxi commissioner, cheerily telling riders about a new model of taxi was panned because riders could not turn it off or mute it.

Taxi officials have long debated how to improve the screens. A survey in 2011 found that riders thought the screens were nearly the worst part of a taxi ride, second only to the high fare. Of the 22,000 riders surveyed, 31 percent said the screens were their least favorite part of the taxi experience.

Despite such sentiments, some riders say they like them. As she stepped out of a taxi at Penn Station, Alyse Lorenzo, 28, of Queens, said she liked Alex Trebek’s “Jeopardy” trivia clips that run in taxis.

“I wouldn’t be distraught if they took them out,” she said. “But if you’re by yourself, it’s nice to have something to look at on your drive.”

And last year, one of the taxi screens helped Mayor Bill de Blasio find a renter for his townhouse in Brooklyn when his family moved to Gracie Mansion — the tenants said they learned of the listing from a news report on Taxi TV.

The current taxi commissioner, Meera Joshi, said the pilot program was an opportunity to try out more modern technology.

“It is definitely something that over time could probably, and does, get irritating for our frequent taxi riders, and most certainly for our drivers,” Ms. Joshi said. “I think it feels somewhat dated today when you’re in the taxi.”

Ms. Joshi declined to say whether she muted or turned off the screen when she rides in a taxi.

If the pilot program is approved, the Taxi TVs will not be removed overnight. The commission will make sure the shift is a “deliberate process” and the new payment system is secure and accurate, Ms. Joshi said

Michael Woloz, a spokesman for Creative Mobile Technologies, one of two companies that provide the screens and other equipment for New York City taxis, pushed back against the notion that riders do not like the monitors. Many passengers, he said, find the news and weather updates useful.

“It shouldn’t be shocking to people that a high percentage of taxi passengers actually watch the content and don’t mind it,” Mr. Woloz said.

Some taxi drivers have opposed the screens since they were first discussed in 2003 and began to be widely implemented in 2007.

On Tuesday outside Haandi, a popular restaurant for taxi drivers in Manhattan, Abul Hossain, 51, said customers do not like the noise.

“I think 99 percent of them keep it off,” said Mr. Hossain, who said he had driven a taxi for about 25 years.

Bhairavi Desai, the executive director of the New York Taxi Workers Alliance, said the mood among drivers over the change was “utter elation.”

“The T.L.C. is eight years late in reversing a horrible decision,” she said, “but we’re glad the time has finally come.”

Indeed, times have changed. In the age of ubiquitous smartphones, the taxi monitor is one screen too many, said Ryan Levine, 29, a musician who was walking past Stuyvesant Square in Manhattan on Tuesday.

“Being in a taxi in New York is like a small escape,” he said. “You’re treating yourself. It’s not the subway. And so I don’t want to be getting blasted with a TV.”