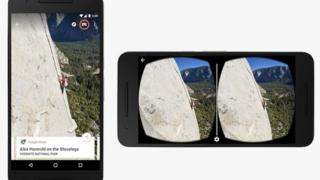 Google is to make its popular Street View service available as a virtual reality app viewable on its budget headset Cardboard.

It has also released figures which suggest Cardboard could be a serious competitor to more expensive headsets.

Google Cardboard is now available in more than 100 countries and Cardboard-ready apps have been installed 15 million times, it said.

One analyst said Street View was a "natural fit" for virtual reality.

Google also announced that it has a growing number of certified viewers - including the Mattel View-Master and the Zeiss VR One GX - on sale, which are made of plastic and are more robust that the original cardboard viewer.

Google has also updated the software development kit to overcome some of the reported problems.

"This update includes a major overhaul of the sensor fusion algorithm that integrate the signals from the gyroscope and the accelerometer," it said in a blogpost.

Piers Harding-Rolls, an analyst with research firm IHS, said that Street View was a "natural fit for VR".

"Google has lots of information and services on the market and some of it will be relevant for VR," he said.

"Street View is 360-degree videos so it is one of the easiest things to get on VR."

Street View via Google Cardboard will not be true VR as the images will not be 3D but users will be able to see street images in 360-degrees, offering a new way to explore cities and landmarks around the world.

Support for Cardboard will be available on both iOS and Android.

The move represents another big push for Google into virtual reality.

It teamed up with content providers such as the American Museum of Natural History, the Smithsonian and others to create the virtual reality experiences and plans to offer the service to thousands of schools.

Mr Harding-Rolls said it was interesting that Google had chosen an educational route with VR while other firms concentrated on gaming and other forms of entertainment for the technology.

"Google Cardboard is currently the biggest VR headset out there but it is a double-edged sword. It is basic and cheap, which draws in lots of users, but the experience is a bit hit-and-miss and the quality of the different apps varies enormously," he said.

"When it was released it was seen as a bit of a gimmick but it is playing a role in educating consumers about virtual reality," he added.

While Cardboard is often given away free, Mr Harding-Rolls thinks Google's next step may be to produce a more robust and more expensive headset.