(Newser) – A Maine high school is doing away with all dances except the "classier" prom this year, the principal announced in an open letter to parents, and "modern dance culture" lies at the heart of the move. Dating himself considerably (or perhaps forgetting how VH1 is spelled), Gorham High School Principal Chris Record explains, "It is by no means the students' fault, but the dancing they have witnessed on MTV/VHS/movies involves primarily only sexually suggestive grinding." For those unfamiliar with the concept, he goes on to describe grinding as "a girl having her back and buttocks pushed up/pulled up against the boy’s groin with the boy’s hands on her hips and other places." Some students complain the move is too draconian. "If there’s people grinding, kick them out," a junior tells the Portland Press Herald. "Don’t ban the whole thing."

Gorham isn't the first school to go to such lengths. One high school in Illinois decided to simply ban grinding as opposed to homecoming, so students boycotted and held their own "anti-homecoming" in a private space, while a high school in Vermont banned its homecoming dance altogether over twerking. In Gorham, reports CBS News, Record says young students are complaining about being pressured to grind, though two-thirds of last year's homecoming dance walked out when told it wasn't allowed. Meanwhile, Gorham's holding a homecoming bonfire Friday instead of a dance. "Word around the school is no one is going to go, and it’s going to be lame," says a senior. (Twerk made the list of most annoying words in 2013.) 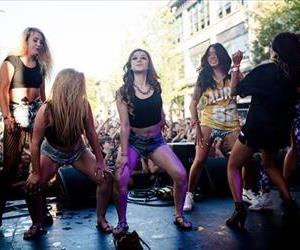