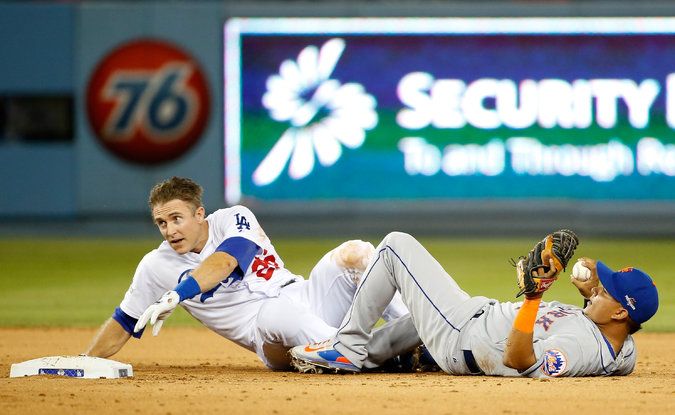 Mets Manager Terry Collins had just finished answering questions from reporters Sunday afternoon when Matt Harvey entered the room. As the two crossed paths, Collins patted Harvey, his Game 3 starter, on the backside, and Harvey acknowledged his manager by slapping him on the arm.

The two were clearly in sync as they prepared for Monday’s Game 3 between the Mets and the Los Angeles Dodgers at Citi Field and the distinct possibility that Harvey, with the ball in his hand and Dodgers batters at the plate, would feel compelled to retaliate for Chase Utley’s hard slide in Game 2, a pivotal play that broke the leg of Mets shortstop Ruben Tejada.

The two did not deny that something might happen, nor did they say it would. Both said they trusted that Joe Torre, Major League Baseball’s chief operations officer, might take action against Utley on his own and remove some of the tension from the situation.

Astros 4, Royals 2: Dallas Keuchel Stays Unbeaten at Home as the Astros Close In on ClinchingOCT. 11, 2015

From Hitting to Sliding, the Rangers’ Rougned Odor InspiresOCT. 11, 2015

Sports of The Times: Mets’ Latest Run-In With Chase Utley Changes the Focus of a SeriesOCT. 11, 2015

Torre has now done that. On Sunday night, Torre said he was suspending Utley, 36, for Games 3 and 4 of the Mets-Dodgers series, stating that Utley was guilty of an illegal slide into Tejada that warranted discipline. 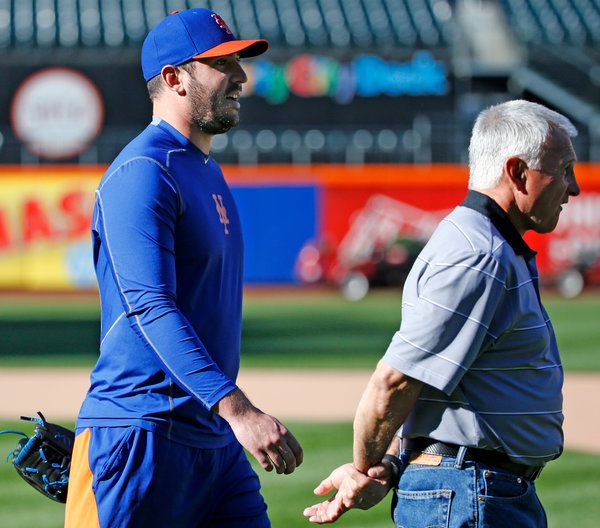 “While I sincerely believe that Mr. Utley had no intention of injuring Ruben Tejada and was attempting to help his club in a critical situation, I believe his slide was in violation of Official Baseball Rule 5.09 (a) (13), which is designed to protect fielders from precisely this type of rolling block that occurs away from the base,” Torre said.

Utley’s agent, Joel Wolfe, said Sunday night that Utley intended to appeal the suspension, terming it “outrageous and completely unwarranted.” The appeal gives Utley the right to keep playing until it is resolved, but it is possible Major League Baseball will move to have the appeal heard on Monday before Game 3 is played at night.

The appeal will be heard by John McHale Jr., baseball’s executive vice president for administration and a colleague of Torre’s.

On the play in question, which occurred in the bottom of the seventh inning with the Mets leading by 2-1, Utley did not slide until he was almost on top of the second-base bag, and he actually struck Tejada from behind as the shortstop was trying to turn his body and throw to first base.

If the suspension is quickly upheld by McHale, Utley, a longtime Philadelphia Phillies star who joined the Dodgers earlier this season, will not appear on the field in New York during the current series between the two teams. If the series extends to a fifth, and final, game in Los Angeles, Utley would be allowed back in uniform.

Utley has good career numbers against Harvey, and the Dodgers’ manager, Don Mattingly, told reporters on Sunday that there was a definite possibility that Utley would be in the lineup Monday night.

Whether the danger of that scenario influenced Torre’s decision to suspend him was left to conjecture. But Utley’s absence could allow both teams to turn their focus to simply winning Game 3 and perhaps be less concerned about potential beanballs.

Torre’s conclusion that Utley’s slide was out of bounds also had the effect of calling the result of Game 2 into question, although the final score — Dodgers 5, Mets 2 — will remain intact.

Utley was on first, and another Dodgers runner, Enrique Hernandez, was on third when, with one out, Howie Kendrick hit a ground ball up the middle. Mets second baseman Daniel Murphy fielded the ball and flipped it to Tejada just as Utley was hurtling toward him.

As Tejada was toppled, Hernandez scored to tie the game at 2-2. Utley was called out at second, but when the Dodgers asked for a video review, the umpires concluded that Tejada’s toe had never touched second for the force play. Utley was thus safe and returned to second base even as Tejada was being taken off the field in a cart. Kendrick, meanwhile, was on first, and instead of two outs in the inning, there was still only one.

And by the time the bottom of the seventh ended, the Dodgers had scored three more times to put the game away.

But had the umpires viewed the play the same way Torre now does, they would have called Utley out for interference and ruled that the batter was out as well. The Mets would have ended up with a double play that would have concluded the seventh with the score still 2-1 in their favor.

Torre addressed that issue Sunday night, noting that interference could be called only on the field and could not be invoked after video review. In other words, when the umpires reviewed the play and judged that Tejada had not touched second base, they did not also have the option to retroactively decide that Utley was guilty of something illegal.

“Determining where to draw the line between an illegal slide and legitimate hard play is an extremely difficult call for our umpires,” Torre said.

Before Torre acted, Collins, Harvey and Mattingly all had to weigh what they were saying to reporters on Sunday, knowing that there was potential for trouble on Monday.

“All I know, for years and years and years, as long as this game is played — and we know there are a lot of changes — players always took care of stuff themselves,” Collins said.

“As far as sticking up for your teammates, I think being out there and doing what’s right is exactly what I’m going to do,” Harvey said.

Harvey twice referred to Utley’s slide on Saturday night as a tackle, and he also brought up Utley’s history of other hard slides: On Sept. 24, 2010, Utley upended Tejada, who was covering second base on a double-play ball in a Phillies-Mets game.

Harvey also said he would not be afraid to throw inside to batters on Monday night, even if the umpires were to issue pregame warnings, a step Collins emphasized he did not want taken.

“In the game of baseball, we do ask our pitchers to pitch inside once in a while, and the last thing we need is an umpire to take the game into his hands,” Collins said.

Mattingly, meanwhile, termed Utley’s slide “a hard, aggressive, legal” play and suggested that if the Mets’ David Wright had done the same thing to the Dodgers shortstop, Corey Seager, he would have been lauded as a gamer by fans and commentators in New York.

“It wouldn’t have been any problem here,” Mattingly added. He also said that if trouble did break out on Monday night, his team would be ready to deal with it.

“We really don’t start anything, but we’ve never backed away,” he said.

Meanwhile, Harvey, amid all the talk about Game 3, raised the notion of helping out in relief in Game 5.

“I’d love to,” he said. Of course, that might be a game that Utley plays in, too.