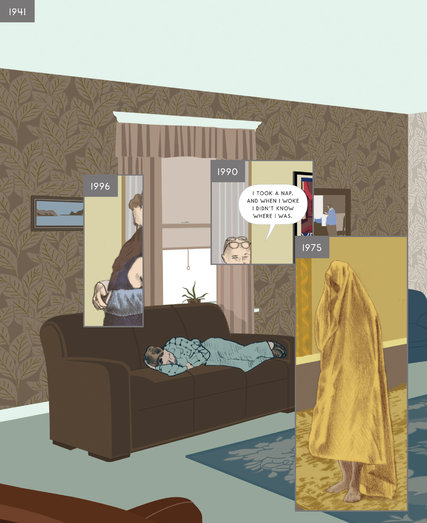 From "Here."Credit Illustration by Richard McGuire

You are looking at a corner of your living room, a scene that remains stable, boringly or reassuringly so, day after day, year after year. And yet that corner serves as a frame for many human activities over those days and years. It accrues joys and sorrows, from the cocktail party and the ceiling leak that immediately dissolve into vague recollection to the enduring memory of the crib and the deathbed. And if your house was built for others, perhaps before you were born, countless parallel scenes will have taken place there beforehand, just as they will continue after you are gone. Furthermore, the land on which your house sits will experience the entire history of the planet, from primordial ooze to whatever unimaginable posthuman future awaits.

And maybe time is just an unavoidable experiential illusion. Maybe all those things — barking dog, musical chairs, natural disaster, biological mutation — are occurring, as it were, simultaneously. We are only able to see one thing at a time in the same way that we are unable to see through walls. That is the premise of ­Richard McGuire’s brilliant and revolutionary “Here,” for which the term “graphic novel” feels awfully small. “Here” has a single setting: a corner of his childhood living room, in a house built in 1907 in what may be Perth Amboy, N.J. The time frame, however, ranges over eons, from 3,000,500,000 B.C. to A.D. 22,175, although most of the action occurs in the 20th century and the early decades of the 21st.

The first few spreads present quiet, unpeopled interiors: 2014 (just a couch), 2014 (a bookcase being filled), 1957 (a playpen), 1942 (a stepladder, a mirror), 2007 (an unfolded sofa bed). As soon as a human appears, however, something strange happens. In 1957 a woman stands looking vaguely at the furniture and tries to remember why she came in the room, while, at the bottom of the page, a black cat walks past — in 1999. In the next spread, the woman is still standing there lost in thought, and the cat is cleaning its paw, but all around their two vignetted frames are woods, with snow that appears to be melting, in 1623. With just a few exceptions, every subsequent spread involves the past intruding upon the future or the future upon the past, sometimes as one set neatly into another, sometimes as flurries of moments from all across time. A baseball breaks the window and flies into the room in 1983; a man breaks a shoelace in 1991; two men fight in 1910; a portion of mirror and wallpaper lurks in 1949 — all this in one spread.

The book originated as a 36-panel story published in 1989 in Raw, the comics journal edited by Art Spiegelman and Françoise Mouly. No one who saw that story ever forgot it: a chronicle of a life, running from 1957 to 2027, as situated in one room, with kaleidoscopic intrusions from various pasts and a wisp of a future — the house burns in 2029 and is torn down in 2030; a time capsule is interred on the site in 2033. The time capsule, perhaps too neat a detail, has not survived the translation to the book, and the story no longer follows a single human life but fully widens its scope to the life of the place. You might say that the book is “Fantasia” to the story’s “Steamboat Willie,” for example, considering the latter’s black-and-white panels that draw their style from generically jocular 1950s illustration. McGuire, who among many other things is an animator, a founder of the postpunk band Liquid Liquid, a frequent cover artist for The New Yorker and the designer and manufacturer of a line of toys, has a great many styles and modes at his disposal. Here he has chosen to give his dizzying material a lush yet sober treatment: spreads in full if often strategically muted colors, in a naturalistic style that suggests many of the drawings were based on snapshots.

Scenes and events occur in about 137 cited years, some of those years making multiple appearances: 1609 (when a man seduces a woman in a glade, both speaking what may be Lenape), 1775 (when Benjamin Franklin visits his Tory son at a house across the way), 1870 (when a painter and his female companion enjoy a romantic picnic in the field), 1907 (when the house is built), 1957 (when a birth occurs), 1986 (when an archaeologist asks to look at the backyard), 1998 (when a bird flies in and causes havoc) and 2014 (the book’s present). Themes recur, too: vision problems, loss of wallets and keys, children’s party games. One spectacular spread features a scattering of breakages and talk-balloon insults from all across the 20th century, while the window at left admits a torrent of water in 2111, which may be an optimistically late date for the Atlantic to inundate Perth Amboy — but then, optimism is a keynote of the book.

The distant past looks impossibly Edenic, the 18th century pretty but troubled, the 19th century pastoral and uneventful, the early 20th century a bit of a blur. It’s difficult to tell just how many families inhabit the house from the 1930s onward, although nearly every year is represented (the longest break occurs between 1999 and 2005), because features are indistinct, presumably on purpose, and people age. It is in any case clear that in the 21st century McGuire has depicted himself and what must be his own family. Several deaths occur or are alluded to circumspectly, and a burglar enters through the window in 1997, but on the whole, the recent past is placid. Cataclysm occurs a century from now, but humanity endures, in science-fictional jumpsuit and hologram mode, at least for a while. In the distant future — between 8,000 and 20,000 years hence — the earth has recovered its primal innocence and is now populated by outsize flora and weird creatures who may owe something to ­Dr. Seuss.

Adventurous novelists have been mashing up time in their works for a century, at least since Albert Einstein formulated his general theory of relativity and was semi-understood by the world. Filmmakers followed a couple of generations later; think of Chris Marker’s “La Jetée” or Alain Resnais’s “Muriel,” for example. But novels and movies are handicapped in their presentation of simultaneity by the fact that they are shackled to time themselves, in the physical unfolding of their narratives. The comic strip or graphic novel, however, is allowed to run free across space as well. In “Here,” McGuire has introduced a third dimension to the flat page. He can poke holes in the space-time continuum simply by imposing frames that act as trans­temporal windows into the larger frame that stands for the provisional now. “Here” is the ­comic-book equivalent of a scientific breakthrough. It is also a lovely evocation of the spirit of place, a family drama under the gaze of eternity and a ghost story in which all of us are enlisted to haunt and be haunted in turn.