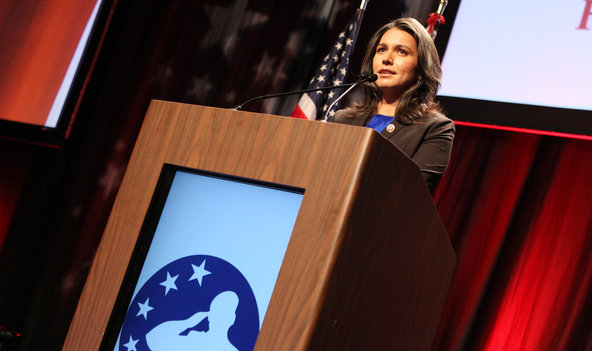 Representative Tulsi Gabbard of Hawaii spoke at an event in Washington in 2013.Credit Paul Morigi/Justice for Vets, via Associated Press

Representative Tulsi Gabbard of Hawaii, a vice chairwoman of the Democratic National Committee, said she was disinvited from the first Democratic presidential primary debate in Nevada after she appeared on television and called for more face-offs.

Ms. Gabbard confirmed on Sunday that her chief of staff received a message last Tuesday from the chief of staff to Representative Debbie Wasserman Schultz, the chairwoman of the national committee, about her attendance at the debate. A day earlier, Ms. Gabbard had appeared on MSNBC and said there should be an increase beyond the current six sanctioned debates.

A person close to the committee who asked for anonymity to discuss internal discussions insisted, however, that Ms. Gabbard had not been disinvited. Instead, the person said, an aide to Ms. Wasserman Schultz expressed a desire to keep the focus on the candidates as the debate approached, rather than on a “distraction” that could divide the party, and suggested that if Ms. Gabbard could not do that, she should reconsider going.

“When I first came to Washington, one of the things that I was disappointed about was there’s a lot of immaturity and petty gamesmanship that goes on, and it kind of reminds me of how high school teenagers act,” Ms. Gabbard said in a telephone interview on Sunday night. She said she would watch the debate in her district in Hawaii, which elected her to her second term last year.

“It’s very dangerous when we have people in positions of leadership who use their power to try to quiet those who disagree with them,” she added. “When I signed up to be vice chair of the D.N.C., no one told me I would be relinquishing my freedom of speech and checking it at the door.”

Holly Shulman, a spokeswoman for the committee, said the desire was to allow the Democrats to present a clear contrast with the Republicans.

“The focus of the debate in Nevada as well as the other debates and forums in the coming weeks should be on the candidates who will take the stage, and their vision to move America forward,” she said. “All that was asked of Ms. Gabbard’s staff was to prioritize our candidates and this important opportunity they have to introduce themselves to the American people. The Democratic Party is a big-tent party, and we embrace the diversity of opinions and ideas that come from our members.”

Ms. Gabbard and R.T. Rybak, a committee vice chairman and a former mayor of Minneapolis, have for weeks publicly called for more debates.

“More and more people on the ground from states all across the country are calling for more debates, are wanting to have this transparency and greater engagement in our democratic process at a critical time, as they make the decision of who should be the next person to lead our country,” Ms. Gabbard said in her MSNBC appearance.

The next day, two people briefed on the conversations said, the chief of staff to Ms. Wasserman Schultz reached out to her counterpart in Ms. Gabbard’s office about attending the debate. Weeks earlier, Ms. Gabbard had said she would like tickets for herself and a guest to the Nevada debate, the one closest to Hawaii.

The person close to the committee insisted: “She was not uninvited. The D.N.C. team wanted this first debate to have all the focus on the candidates. Gabbard’s people were told that if they couldn’t commit to that, since Tulsi was trying to publicly divide the D.N.C. leadership last week, then they should consider not coming.”

The person added, “The fact that she is still making this about her and not our great candidates by talking to The New York Times says something unfortunate.”

Ms. Gabbard said the only issue raised had been “the fact that I had publicly disagreed” with Ms. Wasserman Schultz.

“This isn’t about any one person,” Ms. Gabbard said. “It’s about how the Democratic Party should be representing democratic values, allowing for free speech and open debate within our party, and for more transparency and debates for our presidential candidates.”

“All of our candidates agree with my position,” she added.

Former Gov. Martin O’Malley of Maryland, who has been struggling to gain traction in the Democratic primary contest, has been calling for more debates and has accused Ms. Wasserman Schultz of trying to benefit the leader in the polls, Hillary Rodham Clinton, by limiting debates. Senator Bernie Sanders of Vermont has also called for more debates, although he has not been as adamant as Mr. O’Malley has.

People who disagree with Mr. O’Malley have pointed out that he infrequently debated his challenger for governor in Maryland. And they note the number of sanctioned debates is the same as in the 2008 race for the Democratic presidential nomination.

But there were more than a dozen unsanctioned debates and forums back then. This time, the candidates could be excluded from the sanctioned debates if they take part in ones that are not approved by the national committee.