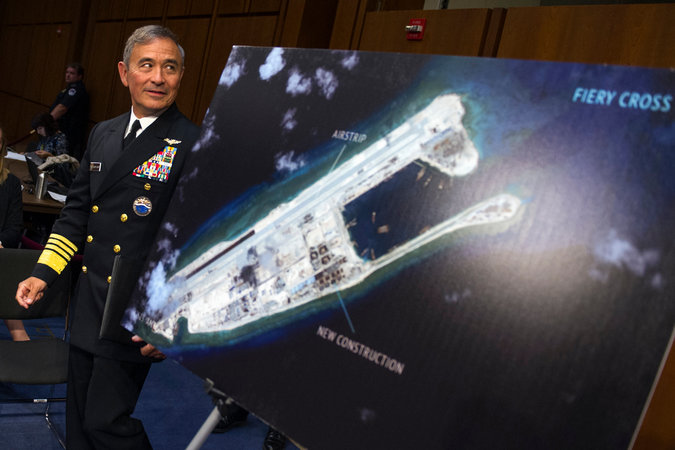 The head of the United States Pacific Command, Adm. Harry B. Harris Jr., by a photograph of an island that China is building on the Fiery Cross Reef in the South China Sea.Credit Cliff Owen/Associated Press

BEIJING — The United States has been briefing its allies in Asia on plans to conduct “freedom of navigation” naval patrols near artificial islands built by China in the disputed South China Sea, a move that could escalate tensions with Beijing after President Xi Jinping’s recent visit to Washington, American and Asian officials have said.

The patrols, which would come within 12 nautical miles of at least one of the islands, are intended to challenge China’s efforts to claim large parts of the strategic waterway by enlarging rocks and submerged reefs into islands big enough for military airstrips, radar equipment and lodging for soldiers, the officials said.

Though China claims much of the South China Sea as sovereign territory, the 12-mile zone around the new islands is particularly delicate because international law says such artificial islands do not have sovereign rights up to the 12-mile limit.

The United States has refrained from venturing that close to Chinese-occupied islands in the South China Sea since at least 2012. In May, a United States Navy P8-A Poseidon aircraft, with a CNN correspondent on board, flew near three of China’s five artificial islands but did not go within their 12-mile territorial zones. The Americans were warned eight times to leave the area by Chinese Navy radio operators. 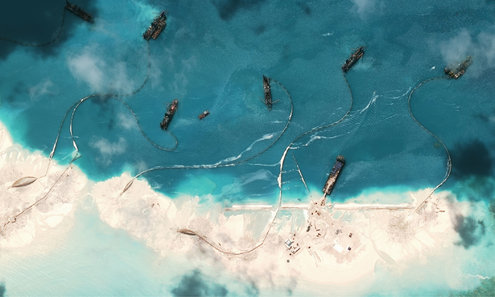 Officials in the Philippines said they had been told of the decision on the planned patrols in the last several days, and Senator Antonio F. Trillanes IV, chairman of the national defense and security committee, said on Monday that he welcomed the policy shift.

The United States secretary of defense, Ashton B. Carter, and the secretary of state, John Kerry, were scheduled to meet with their counterparts from Australia, one of the United States’ closest allies, on Monday and Tuesday in Boston, where the patrols were to be discussed.

The head of the United States Pacific Command, Adm. Harry B. Harris Jr., an outspoken proponent of freedom of navigation patrols whom the White House asked several months ago to offer options for how the United States should respond to the Chinese actions in the South China Sea, was also scheduled to attend the meetings.

The senior adviser on China at the National Security Council, Daniel Kritenbrink, told a gathering of American analysts of the region at a meeting in Washington after Mr. Xi left the United States that the White House had decided to proceed with the patrols close to the artificial islands, according to a participant who requested anonymity to discuss a closed-door briefing.

The White House and the Pentagon, which had been pushing for the patrols, were now on the same page, Mr. Kritenbrink said, according to the participant.

Mr. Kritenbrink did not specify when the patrols would take place, but he suggested that they had been delayed so as not to disrupt Mr. Xi’s visit, the participant said.

The Obama administration and America’s allies in Asia have debated at length over how best to respond to China’s moves in the South China Sea, with some urging such patrols to push back against Beijing and others fearful that the Chinese might use the patrols as justification for some further military buildup.

The Chinese have indicated that they will respond to American warships entering the 12-mile territorial waters around the artificial islands, essentially saying they could not ignore them.

“There is no way for us to condone infringement of China’s territorial sea and airspace by any country under the pretext of maintaining the freedom of navigation and overflight,” the Chinese Foreign Ministry said on Friday. China was “severely concerned” about reports that the United States planned patrols around the artificial islands in the Spratly archipelago, the ministry’s spokeswoman, Hua Chunying, said. Five other governments also make territorial claims in those waters.

During a news conference with President Obama at the White House, Mr. Xi said that China had no intention of militarizing islands in the South China Sea. But exactly what Mr. Xi meant was unclear, American officials said, because he had not said anything like that in the private meetings with Mr. Obama and his senior aides.

One purpose of the patrols would be to test Mr. Xi’s statement, a United States military official said.

At the news conference with Mr. Xi, Mr. Obama emphasized the importance of freedom of navigation, saying, “the United States will continue to sail, fly and operate anywhere that international law allows.”

The assistant secretary of defense for Asia, David B. Shear, recently told Congress that the United States had conducted freedom of navigation patrols in the past but had not gone inside the 12-mile territorial waters of islands claimed by China since 2012. Mr. Shear did not indicate why.

The United Nations Convention on the Law of the Sea recognizes 12-mile territorial limits on naturally formed islands but does not recognize such limits on submerged reefs that have been built by land reclamation into above-the-waterline islands.

The Chinese have recently built five such islands in the Spratly archipelago. On Fiery Cross Reef, they have completed a 10,000-foot runway capable of accommodating fighter jets.

The new Australian prime minister, Malcolm Turnbull, would be less inclined to support the patrols than his more hawkish predecessor, Tony Abbott, said Hugh White, a defense analyst. Mr. Turnbull called China’s island-building “counterproductive” before he took office last month, but he is likely to be cautious about confronting China, Mr. White said.

In Manila, Mr. Trillanes said that the patrols should move ahead. “It can break the stalemate,” he said in a telephone interview. “It’s quite risky, but we need to know right now to what extent China is willing to go in order to defend these newly created islands.”

Mr. Trillanes said he was not concerned that such a move might increase the likelihood of conflict in the region. “The United States has done the math, and they wouldn’t do this if tensions would escalate beyond what they would expect,” he said.

Albert F. del Rosario, the Philippine secretary of foreign affairs, said that sending American ships within 12 miles of the islands would help maintain stability in the region.

“Failure to challenge false claims of sovereignty would undermine this order and lead China to the false conclusion that its claims are accepted as a fait accompli,” Mr. del Rosario said in a statement.

But other countries have seemed less receptive about the idea of aggressive action by the Americans, worried it might inflame tensions in the region.

In an interview in August, Ng Eng Hen, the Singaporean defense minister, said the United States had a right to protect its interests in the region. But when asked whether it should patrol close to the shores of the islands built by China, he said: “We urge caution on all sides. It does no good for the region if there are incidents.”

The United States has several options as to what kind of ships to send on the patrols, and the type of vessel will indicate how big a statement it wants to make, said James Hardy, the Asia-Pacific editor of IHS Jane’s Defense Weekly.

The minimum option would be to send a littoral combat ship that works close to shore and has been used in the past for such patrols, Mr. Hardy said. The United States could also send an Arleigh Burke class destroyer accompanied by a couple of smaller ships, thus sending a firmer message, he said.

The Chinese would also have several choices of how to respond, Mr. Hardy said. They could buzz American ships with aircraft or helicopters or target them with radars as they have Japanese vessels in the East China Sea, he said. Other options would include deploying Coast Guard vessels to shadow the United States Navy ships or using fishing vessels to get in the way of the patrols.