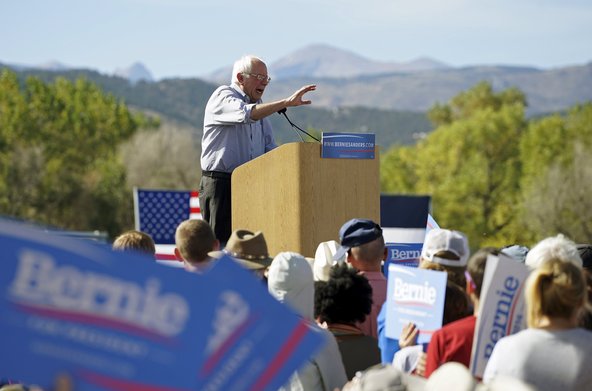 Good Monday morning. After watching their Republican counterparts take on one another in four debates, including the so-called undercard forums, the Democrats get their chance to argue among themselves and to see if they can meet expectations, exceed them or introduce themselves in a contest dominated by Hillary Rodham Clinton and Senator Bernie Sanders of Vermont.

The focus in the 2016 presidential race returns squarely to the Democrats this week, as candidates will head to Nevada on Tuesday night to take the debate stage for the first time. But those expecting fireworks may be disappointed.

Most of the attention has been focused on Mrs. Clinton and Mr. Sanders, the independent whose quick rise caught her and some of her advisers by surprise. Mrs. Clinton’s advisers have been preparing for a variety of topics on which to contrast with Mr. Sanders, and she made one of them clear last week.

“You’ve got a proposal? Tell us how you’ll pay for it,” Mrs. Clinton said in Iowa last week. She did not name Mr. Sanders. But the implication was clear: Mrs. Clinton has detailed how her policy proposals will be brought to bear, while Mr. Sanders’s plans are larger, costlier and with fewer specifics about how they will be put into action.

Mr. Sanders, for his part, has sharpened his contrasts with Mrs. Clinton, and hinted in an interview with MSNBC that Mrs. Clinton could not be trusted because of her changes in positions over the years. To highlight that point, he issued a news release about his no vote on the Iraq war as a congressman in 2002, a clear shot at Mrs. Clinton, whose yes vote as a senator helped cost her the presidential nomination in 2008.

And his spokesman tweaked her on Friday for her recent positions on issues like the Trans-Pacific Partnership trade deal, saying: “What’s next? Will she call herself a democratic socialist?”

Still, both have made a point of saying they don’t want to make character attacks. The unknown factor is Martin O’Malley, the former Maryland governor whose candidacy has been deprived of oxygen by the presence of his rivals, and who has grown sharply critical of both of them. But this is Mr. O’Malley’s  best opportunity to introduce himself to the public in a real way, and he may pull some of the harder punches so as to leave a good, rather than aggressive, first impression.

And unlike at the Republican presidential debates so far, there’s little indication that the moderator is going to encourage a brawl. Anderson Cooper, of CNN, who will moderate the debate, said on Sunday that he was mindful that the candidates did not want a boxing match.

“I’m always uncomfortable with that notion of setting people up in order to kind of promote some sort of a face-off,” Mr. Cooper said on CNN’s “Reliable Sources.” “I think these are all serious people. This is a serious debate. They want to talk about the issues. And I want to give them an opportunity to do that.”

What We’re Watching This Week

–  For their post-debate appearances, Mr. Sanders will be on “The Ellen DeGeneres Show” on Thursday and on “Real Time With Bill Maher” on Friday; Mr. O’Malley will be in New Hampshire on Friday for events, including a forum on affordable housing; and Mrs. Clinton will be in Texas on Thursday for a grass-roots event to organize outreach to Latino voters.

–  Madeleine Albright, who was the first female secretary of state and served in Bill Clinton’s administration, will campaign for Mrs. Clinton on Wednesday in several cities in Iowa.

–  As for the Republicans this week, Jeb Bush will give a “policy speech” in New Hampshire on Tuesday, his campaign says, on his plan for “repealing Obamacare”; Senator Marco Rubio of Florida will be in New Hampshire and Pennsylvania; Donald J. Trump will be in Virginia and New Hampshire; and Carly Fiorina and Senator Ted Cruz of Texas will be in Iowa.

The Tentative Wooing of Paul Ryan

With Congress out of town for the week, it is pretty much a waiting game for the House — as in waiting to see if Representative Paul D. Ryan, Republican of Wisconsin, will run for speaker and whether a group of about 40 hard-line conservatives will accept him if he does.

Mr. Ryan’s allies have made it clear that, even as he contemplates his future from his home in America’s Dairyland, he has no intention of groveling for a position he would take only reluctantly and that House Republicans must demonstrate strong unity behind him.

That might be asking a lot of the membership of the far-right Freedom Caucus, which torpedoed the candidacy of Representative Kevin McCarthy of California. On “Fox News Sunday,” Representative Jim Jordan of Ohio, a leader of the caucus, said the group would “look favorably” upon Mr. Ryan’s bid even though it has endorsed another candidate, Representative Daniel Webster of Florida.

Mr. Jordan also pointedly noted that the main goal of the conservatives was to win some internal changes that would strip power from the speaker and hand more to the conservative bloc.

“I think the next speaker has to be committed to that,” Mr. Jordan said. “I think Paul would be. I know Daniel Webster is.”

So part of the calculation for Mr. Ryan has to be whether offering some concessions to the far-right amounts to groveling.

Our Favorites from The Times

— Politico writes that Senator Rand Paul of Kentucky’s struggles in the campaign — low poll numbers, a dependence on small-dollar donors, and the fact that “his best prospects for victory appear to be in low-turnout caucus states where a small core of committed supporters can carry the day” — are reminiscent of the campaigns of his father, Ron Paul.

—  Mr. Cruz, The Washington Times writes, “appears to be making his move to escape” Mr. Trump’s shadow and to reach for his supporters, “putting the first chinks in the unusual alliance that had developed between the two candidates.”

—  Lawyers for Steven Tyler of Aerosmith, The Associated Press reports, sent a letter to Mr. Trump’s campaign telling it to stop playing the band’s song “Dream On” at rallies.