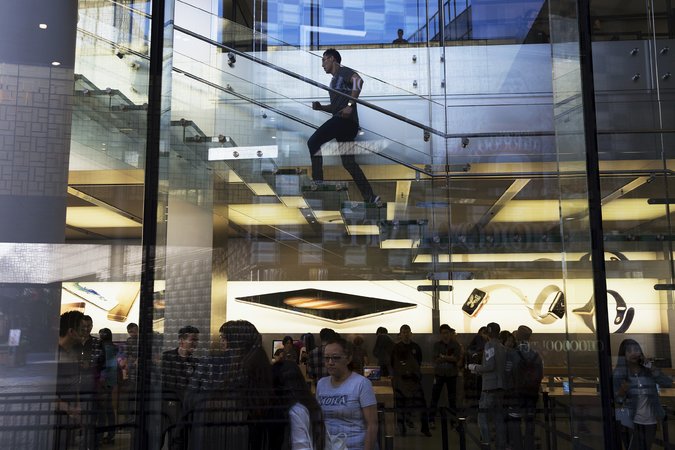 The scene at an Apple store in Beijing on Friday, where the new iPhone 6s and 6s Plus went on sale.Credit Damir Sagolj/Reuters

Apple’s iPhone juggernaut is showing no signs of slowing down — at least where first-weekend sales are concerned.

On Monday, Apple said it had sold more than 13 million new iPhone 6s and 6s Plus devices since they became available for sale on Friday, a record for first-weekend sales. That was up from the 10 million iPhones sold last year during the first weekend that the iPhone 6 and 6 Plus were sold.

Any increase in sales was most likely helped by the geography of the markets where the new iPhones became available. This year, the iPhones went on sale in a dozen countries and territories, including China, which is one of Apple’s biggest markets. Last year, China was not among the countries that sold the iPhone on the first weekend, apparently because the devices had not received approval from Chinese regulators.

Adding China to the product introduction more than doubled the initial market size, according to Walter Piecyk, an analyst at BTIG Research. Jan Dawson, the chief analyst at Jackdaw Research, said he also expected first-weekend sales to be higher than last year because the period for ordering the new iPhones before their sale date was longer than that for the previous generation of the device.

First-weekend sales help indicate overall iPhone demand, an important measure given that the device accounts for the majority of Apple’s revenue. The initial sales also are a marker for how well the new smartphones may do during the end-of-year holiday season, which is typically the most significant sales period for consumer product companies.

This year, UBS estimates that Apple will sell 78.4 million iPhones in the December quarter, up four million from last year, while FBR predicts the sale of 77 million iPhones.

Over the weekend, people camped out in front of some Apple stores to buy the new iPhones, a trend that has become something of a tradition. To cut down on long wait times in line, Apple let people sign up online for time slots during which to pick up their phones in stores.

Mr. Ives said he was at the Apple store on Fifth Avenue in Manhattan on Friday, where he saw about 1,100 customers in line for the 8 a.m. appointment slot and 500 more people walking in without appointments, which is more than he saw last year.

At the Apple store in the Grove mall in Los Angeles, customers stood in the 90-degree heat to collect their new phones. Store employees handed out free bottled water, packs of Capri Sun, fruit and granola bars and provided large umbrellas for shade.

Late in the afternoon, the “Glee” TV star Lea Michele stopped by the Grove to pick up her phone: the iPhone 6s Plus in Apple’s new rose-gold color.