To block ads or not to block ads on your mobile device? That’s the philosophical dilemma facing consumers since Apple added support for ad blockers to its iPhone operating system a couple of weeks ago.

To help answer the question, we decided to put multiple ad blockers to the test. Over the course of four days, we used several ad-blocking apps on our iPhones and measured how much the programs cut down on web page data sizes and improved loading times, and also how much they increased the smartphone’s battery life.

We will get to the results in a minute, after a quick primer on the ethical debate surrounding ad blocking. While such technology has existed for years — it has long been available on PC browsers — ad blockers are new for iPhones and iPads. Using the blockers is easy: You download one of the programs from the App Store and then set your Safari web browser to enable the blocking. Ads are choked off inside the browser when you load mobile websites, but the blockers do not stop ads from appearing in apps.

Continue reading the main story Interactive Graphic The Cost of Mobile Ads on 50 News Websites Most of the data on the mobile homepages of the top 50 news websites comes from advertising, demonstrating the appeal of ad blockers. 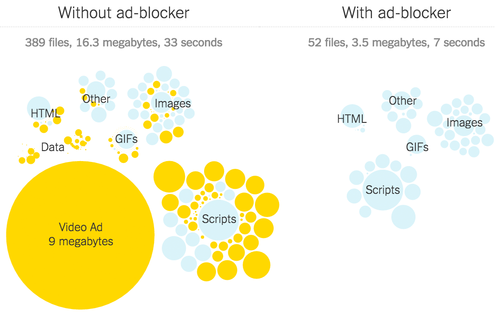 The advantages of ad blocking seem obvious. Not only can consumers eliminate the clutter of promotions, but eradicating data-intensive ads could help deliver faster web page load times and longer battery lives for devices. Dean Murphy, who developed the ad-blocking app Crystal, said blocking programs might also encourage publishers to create better ads that are less taxing on mobile gadgets.

But media companies and many other sites are supported by online ads. So if you get rid of the promotions, you may kill publishers’ business models and lose access to diverse content.

“If the economic engine is threatened, how do small indie publishers and small local news publishers sustain their online content?” Scott Cunningham, a general manager of the Interactive Advertising Bureau Tech Lab, said in an interview.

Lost in the debate is whether ad blockers truly benefit consumers’ mobile devices in the first place. So we ran two specific tests on iPhones using three ad blockers: Purify and Crystal, which are among the most downloaded ad blockers, and 1Blocker, a less popular app.

In the first test, we recorded the data sizes of the 50 most popular news websites with and without ad blockers enabled. We used those figures to calculate approximate page load times on a 4G mobile network.

In the second test, which was designed to measure battery life, we compiled a custom iPhone app to cycle through dozens of popular websites in an endless loop. We then timed how long it took the battery to completely drain from our phone with and without ads.

The results: For a number of websites that contained mobile ads with a lot of data, web page data sizes decreased significantly and load times accelerated enormously with ad blockers turned on. The iPhone’s battery life also improved — but more modestly — with ads removed.

Loading times for The New York Times were also faster with ad blocking software. The home page of NYTimes.com measured 3.7 megabytes when loaded with ads and took seven seconds to load; Purify shaved the size down to 2.1 megabytes and cut the loading time to four seconds.

Beyond loading times, web page sizes matter because most of the latest smartphone plans have data limits. Some carriers, like AT&T and Verizon, charge fees if you surpass your data allotment. So the websites with bloated ads not only take longer to load, but they can pad data consumption and phone bills.

The battery life of the iPhones we put to the test also improved with ad blocking, though not as significantly as the load times and page sizes. Running our battery-test app on an iPhone 6s over a Wi-Fi network, it took four hours to completely drain a fully charged battery with Purify enabled, about 42 minutes longer than when the same test was run with ad blockers disabled. With Crystal on, it also took four hours to deplete the battery, while the 1Blocker app took 3 hours and 42 minutes.

Ad blockers can have some technical downsides, such as causing websites to load erratically. A recent analysis by Fortune found that the Crystal app caused websites for retailers like Sears, Walmart and Lululemon to load with pieces of content missing or with broken online shopping carts. Crystal has since fixed those sites to load properly, and Mr. Murphy said he included a tool for users to report other sites that were not loading correctly.

So is mobile ad blocking worth it? While a 21 percent battery life increase from using Purify or Crystal may seem attractive, keep in mind that this applies only to web browsing, which is just one of many tasks you do on a smartphone. In everyday use, the improvement to overall battery life will be subtle.

But consumers who use ad blockers will enjoy speedier access to web content, not to mention the slimmer data sizes of web pages. That may encourage some publishers to re-evaluate their choices in mobile advertising methods.

If anything, ad blockers increase transparency into the different paths that publishers take when integrating ads into their websites. Some publishers appear to carefully consider how ads affect the performance of your device, while others either do not care or lack the resources to do so.

As for me, the test results spurred me to keep Purify enabled on my iPhone. While I’m browsing, the app lets me easily denote a website whose ads I want to allow to be shown, an action known as “whitelisting.”

That means the websites I enjoy visiting that have slimmer ads — like TheGuardian.com, and, ahem, NYTimes.com — will be whitelisted. But sites saddled with ads that belong in digital fat camp will remain blocked for the sake of my data plan.

An article on Thursday about the effect of ad blockers on loading times for web pages and battery life in mobile devices misstated the title of Scott Cunningham, who pointed out the downside of blockers on independent publishers who rely on advertising revenue. He is a general manager of the Interactive Advertising Bureau Tech Lab, not the bureau itself.