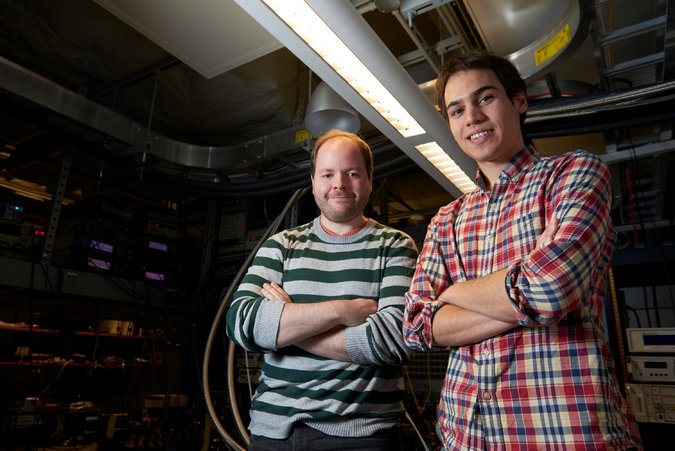 Andrew L. Yeats, left, and Peter Mintun in an optics lab at the University of Chicago.Credit Joel Wintermantle

For the physics researcher Andrew L. Yeats, a light-bulb moment led to an important new insight.

Last year, in the University of Chicago’s new physics laboratory illuminated by low-energy fluorescent lights, Mr. Yeats was puzzled by a persistent error in an experiment involving an exotic material known as a topological insulator, a class of materials that conducts electricity on the surface and edges but insulates on the interior.

To the graduate student’s amazement, the hunt for the unexplained “noise” that was contaminating his experiment has led to a new technique for rapidly drawing and erasing optical computing circuits. The scientists describe the construction of optical “gates,” which might be used to create light-based circuits that are similar to electronic circuits based on transistors.

The insight could have an impact on diverse applications, including quantum computing research, new types of precise sensors and possibly a new approach to computing.

The mystery of the “noise” was resolved when the scientists realized that the low-energy fluorescent lights in the lab emitted ultraviolet light at just the right wavelength to polarize the surface of the experimental material they were using.

The results, published Friday in the journal Science Advances, describe the invention of what is, in effect, an optical “Etch A Sketch” that makes it possible to create patterns in the topological insulator with light that persists even after the light source is removed. By using a different wavelength of light, it is also possible to erase the pattern effect.

The researchers said that by altering the material, it would be possible to effectively create circuits that were similar to those designed by chipmakers who embedded electronic circuits in silicon wafers by alternately exposing the material to light and chemicals.

“We thought there was something odd going on,” said David D. Awschalom, an experimental physicist at the University of Chicago. “One day the circuit would work in a certain way, and the next day it would work in a different way. Eventually we correlated that random element to the lights going on and off in the lab.”

The results, which were reported jointly by scientists at the University of Chicago, University of California, Santa Barbara, and Pennsylvania State University, have charted a new avenue of research involving topological insulators.

“I think the serendipity happens more often than not if you go into the history of science,” said Evelyn Hu, a professor of applied physics at Harvard University. “The extraordinary thing behind every important discovery is not that it happened accidentally. The extraordinary thing is that the researchers noticed.”

One early potential application would be in the design of circuits for quantum computers. Despite decades of research, the question of whether there will ever be useful quantum computers that perform calculations more quickly than conventional machines is still subject to heated debate.

There is currently a wide range of competing approaches used to build arrays of physical structures called qubits that are capable of storing information as both a 1 and 0 value simultaneously, known as superposition. While it has been possible to achieve superposition to create qubits using a variety of techniques, coaxing large numbers of them into a sustained state described as entanglement, remains an area of intense research.

Microsoft is supporting scientists who are trying to build quantum computers by “braiding” subatomic particles known as anyons; in effect, generating qubits by moving the particles on the surface of topological insulators as if they were on train tracks.

In the paper, the University of Chicago team speculated that the new optical gating technique might help create a quantum computing environment or possibly serve as a platform for another approach to computing and information storage known as “spintronics” that is based on controlling the magnetic state of electrons.

“Because we believe these findings are applicable to a broad range of materials, we think that both the National Science Foundation and the Department of Defense funding agencies will be very interested in exploring new directions,” Dr. Awschalom said.

The scientists reported that they had so far been able to sustain the Etch A Sketch effect for more than 16 hours. They also noted that while it is seen most strongly at low temperatures, by refining the materials they might eventually be able to reproduce it at room temperature.

Other scientists said that while the results are both surprising and novel, applications might not be forthcoming quickly.

The optical-gating effect has been demonstrated most clearly at extremely low temperatures, and the researchers have not confirmed that it is replicable either at tiny scale or for writing and erasing quickly,said Alan Huang, a physicist and former Bell Laboratories researcher.

“It’s novel. I don’t think people expected this,” he said. “But how practical it will be — I’m not sure.”