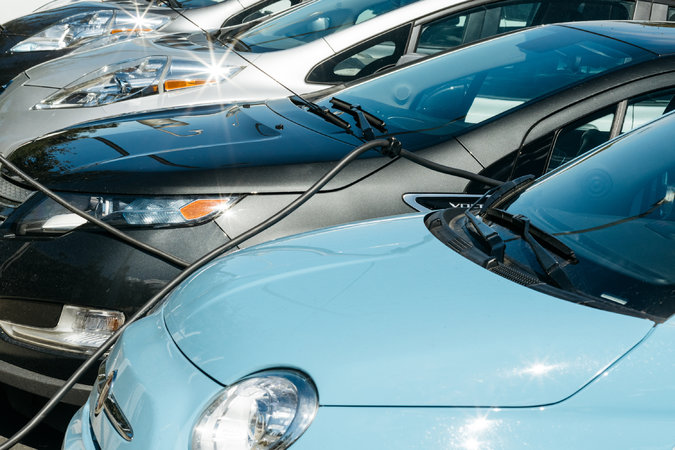 SAN FRANCISCO — Of all the states, California has set the most ambitious targets for cutting emissions in coming decades, and an important pillar of its plan to reach those goals is encouraging the spread of electric vehicles.

But the push to make the state greener is creating an unintended side effect: It is making some people meaner.

The bad moods stem from the challenges drivers face finding recharging spots for their battery-powered cars. Unlike gas stations, charging stations are not yet in great supply, and that has led to sharp-elbowed competition. Electric-vehicle owners are unplugging one another’s cars, trading insults, and creating black markets and side deals to trade spots in corporate parking lots. The too-few-outlets problem is a familiar one in crowded cafes and airports, where people want to charge their phones or laptops. But the need can be more acute with cars — will their owners have enough juice to make it home? — and manners often go out the window.

In the moments after Don Han plugged in his Nissan Leaf at a public charging station near his Silicon Valley office one day this summer, he noticed another Leaf pull up as he was walking away. The driver got out and pulled the charger out of Mr. Han’s car and started to plug it into his own. Mr. Han stormed back. 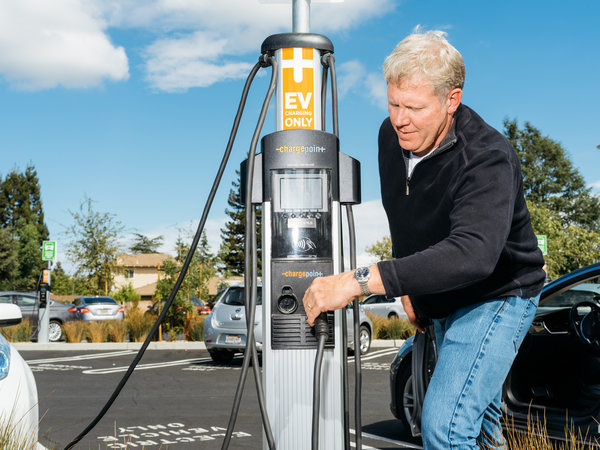 “I said, ‘Hey, buddy, what do you think you’re doing?’ And he said, ‘Well, your car is done charging,’ ” Mr. Han recalled. He told him that was not the case, put the charger back in his own car and left “after saying a couple of curse words, of course.”

Such incidents are not uncommon, according to interviews with drivers and electric vehicle advocates, as well as posts from people sharing frustrations on social media. Tensions over getting a spot are “growing and growing,” said Maureen Blanc, the director of Charge Across Town, a San Francisco nonprofit that works to spread the adoption of electric vehicles. She owns an electric BMW and recently had a testy run-in over a charging station with a Tesla driver.

“It’s high time,” she said, “for somebody to tackle the electric-vehicle etiquette problem.”

Some people are working on short-term fixes. A Google computer manager said he had sold 9,000 of the EV Etiquette Survival Packs that he created. For $15.99, a pack includes hang tags for vehicles that urge fellow drivers not to unplug others’ cars while charging.

More public chargers are the obvious long-term solution. About half of the 330,000 electric vehicles in this country are registered in California, and Gov. Jerry Brown wants to increase that number to 1.5 million by 2025. He has pledged a sharp increase in charging stations.

Right now, there is roughly one public charger for every 10 electric vehicles — about 15,000 in California and 33,000 across the country, according to ChargePoint, one of the biggest charging-station companies. (There are thousands of other, unofficial charging spots that are essentially wall outlets that businesses or homeowners have made available for public plug-in).

The larger public charging stations tend to look like high-tech gas pumps and often are in parking lots. But they can vary widely in cost and charging power. Some take half an hour for a charge and others four hours or more; many are free or subsidized, and others cost $1 an hour or more. Public charging stations and lights on many vehicles indicate when a car battery is full.

Most people charge at home (using an electrical outlet) but also want to use public chargers, in part because the cars have a limited range — typically 80 miles. On top of this “range anxiety,” as it is called, drivers like the idea of getting a free or low-cost charge at a public station.

“Imagine going to a gas station that says, ‘Here’s free gas.’ Who wouldn’t want to muscle in and say, ‘I’ll take some free gas’?” said Ollie Danner, the founder of EVPerks, a California company that works with local and national businesses to offer coupons and other incentives to electric vehicle drivers. 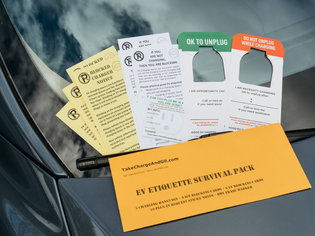 Mr. Brown's EV Etiquette Survival Pack. For $15.99, a pack includes hang tags for vehicles that urge fellow drivers not to unplug others’ cars while charging.Credit Jason Henry for The New York Times

The rudeness is not just among drivers of electric cars. By many accounts, owners of gas-powered cars often take up desirable parking and charging spots that companies and cities reserve for electric cars. This habit has inspired the spread of a nickname: ICE Holes. (ICE stands for internal combustion engine.)

“Some people say, ‘I just wish I could key their cars,’ ” said Jack Brown, who created the EV Etiquette Survival Packs and a Facebook page devoted to complaining about the interlopers.

Mr. Brown, who works in Google’s driverless car division and used to work at Tesla, includes in his survival packs a notice to put on gasoline-engine cars. It reads, “EV charging spaces are functional reserve spaces, just like disabled drivers spaces.” The tag goes on to say that blocking the spaces “is not only inconsiderate, it is illegal in many areas.” But it also includes stickers that inform other drivers that it is all right to unplug a car if it is fully charged, and others that ask, “Can you plug me in when you’re done?”

The competition has led people to judge one another’s cars and which ones deserve charging priority. Owners of all-electric cars see themselves as most entitled to the chargers, since they have no Plan B. One rung down are “plug-in hybrids,” which use electricity but also can use gas, followed by hybrids, and then two groups for which the owners of pure electric cars reserve particular disdain: gas cars and, perhaps surprisingly, Teslas. (The $100,000 Teslas, as much as three times the cost of other plug-ins, have a range of several hundred miles and so, theoretically, do not need the charge spots.)

Jamie Hull, who drives an electric Fiat, grew apoplectic recently when she discovered herself nearly out of a charge, unable to get home to Palo Alto. She found a charging station, but a Tesla was parked in it and not charging. She ordered a coffee, waited for the driver to return and, when he did, asked why he was taking a spot when he was not charging. She said the man had told her that he was going to run one more errand and walked off.

“I seriously considered keying his car,” she said.

Among its own customers, Tesla has faced similar issues. In fact, some Tesla drivers reported having received a letter in August from the company saying that they were overusing its network of superfast charging stations — meant to aid long-distance travel — and that they should unplug once charged.

Ms. Hull, an executive at Evernote, a software company where electric vehicles outnumber chargers 60 to 12, the scramble for chargers leads to curious behavior. The company does have a sign-up sheet for reserving charging time. But it is not uncommon for people to leave their cars too long, or for members of the public to take the spots or even, Ms. Hull said, for people to work outside deals.

“There’s an entire black market for trading spots,” she said. For example, employees will give their spots to friends or managers as favors, Ms. Hull said.

At some other Silicon Valley companies where workers own a lot of electric vehicles, employees will get a note from someone in their department when someone is about to unplug and open up a spot. The legal department might band together, for instance, or the communications department, creating little sharing fiefs.

To Ms. Hull, the culture stems in part from the way electric car owners have grown used to perks, like getting state and federal subsidies for buying green cars, or permission to use the car pool lane. So when it comes to unplugging someone, well, they feel deserving. “They’re not bad people, necessarily,” she said. “They may have some amount of entitlement.”