LOS ANGELES — Never mind the movie. The first big test of the unearthly riches that Disney hopes to mine from “Star Wars” is a video game.

Over the last two years, as anticipation has built for the restart of the “Star Wars” movie series, the Walt Disney Company has executed a parallel plan to overhaul how “Star Wars” games are made. The revamp was complex — dozens of workers were laid off and planned concepts were jettisoned — but the reason for it was simple: More often than not over the years, “Star Wars” games have disappointed.

Star Wars Battlefront, published by Electronic Arts under a license from Disney, will arrive in stores on Nov. 17. (An Internet-based test version was made available to fans on Thursday.) Battlefront, as the game is known, cost an estimated $180 million to make and market, and hopes are that it will sell roughly 12 million copies worldwide, which translates to about $720 million in retail sales or $550 million wholesale, according to Michael Pachter, an analyst at Wedbush Securities.

Electronic Arts has told Wall Street that it expects to sell nine million to 10 million copies of the hyper-realistic Battlefront, which carries a suggested price of $60. Most analysts, however, say they believe that the publisher is lowballing its estimates.

More is at stake than the quick ring of cash registers. Disney, which bought Lucasfilm and its “Star Wars” assets for $4 billion in 2012, wants to prove to investors that the boutique studio is starting to achieve its full potential. An exuberant reception for the game would also help assure fans of the quality of the coming movie, “Star Wars: The Force Awakens,” which is set for release in theaters on Dec. 18. The last three “Star Wars” films relied heavily on computer-generated imagery, disappointing many moviegoers.

“We felt a lot of pressure — good pressure, but pressure — to nail the ‘Star Wars’ gaming experience,” said James Pitaro, co-chairman of Disney Consumer Products and Interactive Media. “We feel great about where we came out,” he added, referring to both Battlefront and a “Star Wars” version of Disney Infinity, a game aimed at families.

Mr. Pitaro was given control of Disney’s struggling gaming division in 2013 and charged with ending years of wildly uneven results. He laid off a quarter of Disney Interactive’s global staff, or about 700 people, and sharply scaled back in-house game development. Mr. Pitaro’s turnaround effort has been successful, but a smash hit would further solidify his strategy.

Electronic Arts is hoping to vanquish its own ghosts. A few years ago, the company ran into criticism from investors after missing financial forecasts and making acquisitions that never quite paid off, forcing it to lay off employees and otherwise cut costs.

More recently, Electronic Arts has been on the upswing; its stock price is up more than fourfold since the start of 2013. But a seamless introduction of Battlefront would help the game giant end a lingering reputation for delays and convince consumers that it sits on the cutting edge of an industry push toward games that are cinematic in their graphic realism. 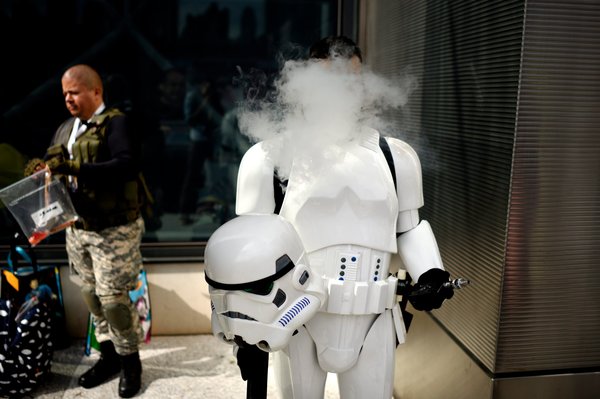 Battlefront tries to tap into the seemingly inexhaustible reservoirs of nostalgia for the original “Star Wars” trilogy by allowing players to engage in combat in the forests of Endor and wield lightsabers in the deserts of Tatooine. “If you go play Endor, the funny thing is the game actually looks better than the original movie does,” said Patrick Söderlund, executive vice president of EA Studios.

The fan response to last week’s test version was strong, and critics who previewed the game at a recent trade convention were impressed. (IGN, a games-focused website, called it “gloriously hectic, and a welcome change of pace.”) But there has been skepticism among some core fans because of past letdowns — this crowd forgets nothing — and die-hards have grumbled about features that Battlefront lacks. There is no space combat, for instance, or a story-driven single-player mode.

“The lack of single player isn’t the kind of thing that tanks a game, but it puts more pressure on the multiplayer to be really fantastic,” said Geoff Keighley, the creator and producer of the Game Awards, the Oscars of the gaming world.

Unexpected malfunctions could also lessen Battlefront’s impact. “Making games is hard; building fun is hard,” Andrew Wilson, the chief executive of Electronic Arts, said in a recent earnings call in response to a question about Battlefront’s readiness. He added that he felt “very, very good” about the game.

“Star Wars”-themed games have a checkered history when it comes to sales and quality. Electronic Arts introduced an online game in 2011 called Star Wars: The Old Republic that charged players a monthly subscription fee just as that model was beginning to fall out of favor. The pre-Disney game, which went considerably over budget and suffered delays, was a major flop. (Electronic Arts says Old Republic has become more successful since it was made free to play. The company charges players for enhanced abilities and other perks.)

The “Star Wars” name is not enough to guarantee success. Star Wars: Commander, a mobile game released by Disney a year ago, has been a significant moneymaker, according to data from the analytics firm App Annie. But a recent mobile game pegged to “Star Wars Rebels,” an animated TV show, landed with a comparative thud.

“Star Wars” games go back to at least 1982, when Atari players could battle in the snow of “The Empire Strikes Back.” LucasArts, a division created by George Lucas to capitalize on the fledgling entertainment medium, over the years created critically acclaimed games like The Secret of Monkey Island and Grim Fandango.

But “Star Wars” games, with a few exceptions, were often misfires. As budgets on big games began to soar into the tens of millions of dollars, some LucasArts employees felt as though they didn’t have consistent backing. “As the gaming business scaled up, they faced challenges because they were a little boutique publisher,” Mr. Keighley said.

Disney immediately closed LucasArts and said it would concentrate on fewer games of higher quality; most of the biggest games have been licensed to the likes of Electronic Arts.

Some business partners in the past have complained that the intensely private Lucasfilm kept them at arm’s length. This time, the Electronic Arts teams were given “unprecedented” access to the “Star Wars” archives, according to Ada Duan, Lucasfilm’s vice president of digital business and franchise management.

The studio held seminars for Electronic Arts developers at Lucasfilm headquarters in San Francisco or at E.A.’s offices down the peninsula in Redwood City. The “Yoda Talks,” as they were called in homage to TED Talks, showed how Mr. Lucas was inspired by film of World War II aerial battles when he was creating “Star Wars.”

Developers in the trenches often groan about making games based on movies; in most cases they favor original projects that aren’t encumbered by the kind of creative approvals involved when a brand is licensed. That has changed slightly in recent years, most notably with the critical and commercial success of recent Batman games.

There was no hesitation at Digital Illusions Creative Entertainment, a developer owned by Electronic Arts where “Star Wars” geekdom runs deep, said Mr. Söderlund, who was one of the studio’s founders. When told they would be building a new Battlefront game, he said, “literally, people were crying.”

To deepen Battlefront’s realism, Digital Illusions took terabytes of high-resolution photographs of stored props and costumes. They also shot new material at locations (a redwood forest, Death Valley) where the original “Star Wars” movies were filmed. They then stitched the images together into 3-D models using a technique called photogrammetry.

“This will be the first time,” said Mr. Wilson, the Electronic Arts chief, “that the collective ‘Star Wars’ fan base is going to have the ability to live out the Star Wars fantasy in a truly immersive way.”