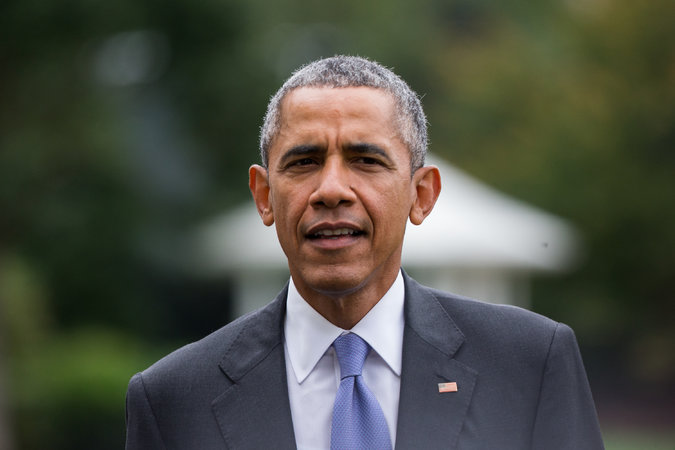 President Obama last month. In an interview broadcast on Sunday, he said Hillary Rodham Clinton's use of a private email server when she was secretary of state had been “ginned-up” into a political attack.Credit Zach Gibson/The New York Times

WASHINGTON — President Obama on Sunday called Hillary Rodham Clinton’s use of a private email server “a mistake,” but said it had not endangered national security and had been “ginned-up” into a political attack by Republicans eager to keep her from being president.

Mr. Obama made the comments during an interview on CBS’s “60 Minutes” program in which he also defended his policy in Syria during a lengthy, contentious exchange with Steve Kroft, a veteran correspondent.

Mrs. Clinton’s use of the email server during her tenure as secretary of state has become the centerpiece of Republican-led investigations into the 2012 attacks in Benghazi, Libya, that killed four Americans. She is certain to face questions about the emails during Tuesday’s Democratic presidential debate and later this month when she is set to appear before a House committee.

In the interview, which was taped Tuesday and broadcast Sunday evening, Mr. Obama called those questions legitimate and said — without directing the comments specifically at Mrs. Clinton — that public officials in high office should know better.

“As a general proposition, when we’re in these offices, we have to be more sensitive and stay as far away from the line as possible when it comes to how we handle information, how we handle our own personal data,” Mr. Obama said. “And, you know, she made a mistake. She has acknowledged it.”

The president said Mrs. Clinton “could have handled the original decision better” and might have been quicker to disclose work-related emails that had been kept on a private server outside government control.

Mr. Obama said her possession of the email server “is not a situation in which America’s national security was endangered.” He declined to say whether the email controversy was “not that big a deal,” but he chided Mrs. Clinton’s critics for their single-minded focus on the issue.

“The fact that for the last three months this is all that’s been spoken about is an indication that we’re in presidential political season,” he said.

On Syria, Mr. Obama acknowledged the failure of his $500 million mission to “train and equip” as many as 5,000 fighters in the battle against the Islamic State. The president said he had long been skeptical that the program could create an effective “proxy army,” but tried it anyway in an effort to confront what he called a “difficult problem for the entire world community.”

Mr. Kroft repeatedly challenged the president on his policy in Syria and at one point complained that Mr. Obama was “filibustering” with long answers. Mr. Obama at times appeared exasperated by Mr. Kroft’s questions, once responding: “If you ask me big, open-ended questions, expect big, open-ended answers.”

The president accused critics of expecting better results in Syria after just a year of American intervention, noting that Afghanistan still needs attention over 13 years after the United States sent its military there. He said the situation in Syria would not be resolved by American troops.

“Resolving the underlying crisis is going to be something that requires ultimately the key players there to recognize that there has to be a transition to new government,” he said. “And in the absence of that, it’s not going to work.”

“If you think that running your economy into the ground and having to send troops in, in order to prop up your only ally, is leadership, then we’ve got a different definition of leadership,” Mr. Obama said. He added later: “The fact that they had to do this is not an indication of strength.”

Mr. Putin’s aggressive moves into Syria, in particular strikes by warplanes and missiles, in the last several weeks appeared to take the United States government by surprise. But Mr. Obama suggested in the interview that officials had some warning of the Russian plans.

“We had pretty good intelligence,” he said in response to a question about whether Mr. Putin told the president about the military moves when the two met at the United Nations last month.

“We knew that he was planning to provide the military assistance that Assad was needing,” Mr. Obama continued, referring to the Syrian president, Bashar al-Assad, “because they were nervous about a potential imminent collapse of the regime.”