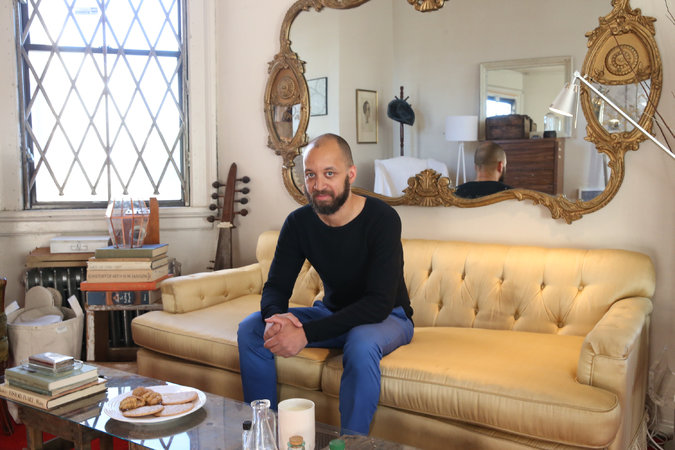 Yet Jersey City could soon have something New York does not. On Monday, Mayor Steven M. Fulop will introduce legislation to legalize the use of all short-term sleepover web services, like Airbnb and HomeAway. The law is expected to be approved by November.

In exchange for agreeing to let some of Jersey City’s 262,000 residents rent out a couch, a bedroom or even their entire apartment or house on Airbnb, the company would charge users the same 6 percent hospitality tax currently levied on guests at the city’s dozen hotels.

Mr. Fulop anticipates the tax would generate between $600,000 and $1 million annually on the more than 300 Airbnb listings in the city. That would be added to the roughly $6 million the city makes on its hotel rooms each year. 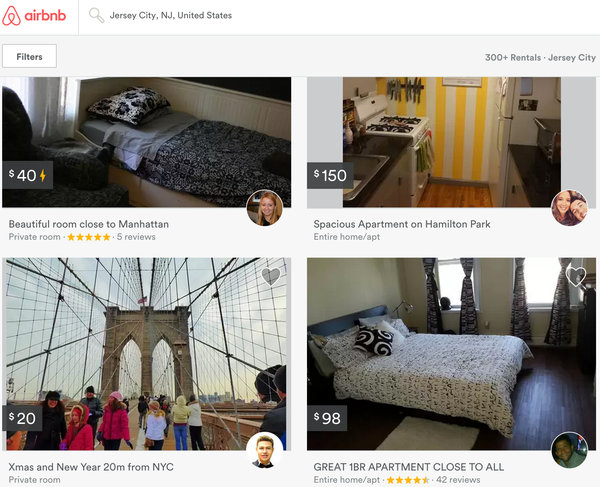 Airbnb listings of rooms and apartments for rent ranging from $20 to $150 a night.

Though some remain skeptical of Airbnb and its disruptive effect on both the hotel industry and the housing market nationwide, Mr. Fulop has decided to embrace it.

“Maybe it’s my age, or my friends who love Airbnb, but it’s certainly not going away,” the 38-year-old mayor said in an interview. “You can either try and fight it and resist change, which I’m not sure is going to work, or you can try and figure it out and work together.”

Airbnb is illegal in New York State except under certain circumstances. Hosts are allowed to rent a room or two, so long as they remain on the premises, rather than vacating and renting out the entire apartment or home, as would be allowed in Jersey City.

This is seen as a protection against properties being turned into de facto hotels, of which there have been some instances, though it is a matter of debate how prevalent that practice is.

“Any objective analysis will tell you there has been a housing crisis in New York for decades now, and 30-plus years of housing policy hasn’t changed that, so I don’t think we’re the problem here,” Chris Lehane, a former aide to Bill Clinton who recently became the head of global policy for Airbnb, said.

Mr. Fulop said he believed legalizing Airbnb would make it easier to monitor and regulate short-term rentals, not harder. “We need to work with Airbnb, not against them,” Mr. Fulop said. “After all, look at what technology did to the music industry and the taxi industry.”

Even so, Airbnb opponents in New York remain vigilant, and new laws in Jersey City will not change that.

“Since when does New York City look across the Hudson for a policy blueprint?” Assemblywoman Linda B. Rosenthal, a Democrat from Manhattan, said in a statement. “Whatever happens in Jersey City stays in Jersey City. With scarce affordable housing and unified opposition to illegal hotels here, this development will have zero impact on the law in New York.”

Over the past year, Airbnb has been legalized in dozens of cities, most notably in its hometown, where San Francisco officials collect a 14 percent tax. Cities ranging from Grand Rapids, Mich., and Nashville to Portland, Ore., and Santa Rosa, Calif., have also implemented taxes.

Many mayors have taken Mr. Fulop’s view of Airbnb, including Michael Nutter of Philadelphia, who legalized the service with a 8.5 percent tax just before Pope Francis arrived last month and a year ahead of the Democratic National Convention.

It was the Super Bowl in 2014 that spurred interest in Airbnb in Jersey City, when people were scrambling to find accommodations near MetLife Stadium.

Today, Airbnb spaces on offer range from an $850-a-night duplex overlooking Hoboken and Manhattan to a cluttered, windowless room that, at $20 per night, might be one of the cheapest rooms in the area.

“I think coming from New York, there’s this stigma about New Jersey, but if you live in Europe or Latin America, you have no idea,” Francois Baron said. After moving to Chelsea with his partner two years ago, they decided to rent out two units in their brownstone on Airbnb, so they could continue to store furniture and art there. Two other units are rented out on a long-term basis.

With residents embracing the service, Jersey City’s elected officials felt they had to do the same. When residents in some of the high-rise buildings lining the Hudson River raised concerns to Councilwoman Candice Osborne, she proposed legalization, and taxation, of the service.

“You can fight it all kinds of ways, but at the end of the day, it’s someone’s personal property, and it’s a service people want to use, so there is only so much you can do,” Ms. Osborne said.

Just ask Ed Ramirez. He began renting out space in his apartment in June 2013 in the McGinley Square neighborhood and was so impressed with Airbnb, he convinced friends and neighbors to use the service. He now manages 30 listings for between $40 and $110 a night. Under the new law, he would have to get a license, as would anyone with more than five listings.

Mr. Ramirez said it was hard to find long-term tenants for most of his units, but renting them through Airbnb proved more lucrative. And local businesses, like restaurants, also benefit from the flow of renters. He does not see the new tax as an impediment to his business.

“That’s the beauty of technology. We can adjust our prices on the fly if nobody is staying,” he said. “It’s like running a hotel out of the palm of your hand, except the rooms aren’t all in one building and the model is more progressive. Everybody benefits.”