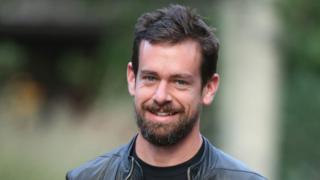 It has been an open secret for days, but now it's official - Jack Dorsey is back as chief executive of Twitter.

The man who helped found the company, then was sacked amid all sorts of internal feuding, has now been confirmed as boss after serving as interim CEO since July.

But what was really remarkable about Monday's announcement was the news that Dorsey would stay on as Chief Executive of Square, the payments service he started after first leaving Twitter.

So now one man will be running two major enterprises which are both facing challenging times.

You only have to look at Twitter's share price to see what a task he has got on his hands there.

The value of the company has halved in the last six months amid investor worries that growth in users is slowing to a snail's pace.

In the last few months, under Dorsey's interim leadership, there have been a number of initiatives to get Twitter growing again, mainly by simplifying the experience.

There is even talk of abandoning the 140 character limit, the very essence of the service's appeal.

But making Twitter easier for newcomers without annoying those who use it a dozen times a day will be a hard trick to pull off.

And after fixing that, Jack Dorsey will have to sprint across San Francisco to his payments firm.

Square has also been on something of a rollercoaster ride, first pioneering mobile payments for small businesses via its smartphone accessory, then pivoting into supplying a virtual cash register.

A stock market float has been on the cards for some time, but there is still little data on its finances.

Now though it is thought that an initial public offering (IPO) may be imminent.

If so, that will mean a gruelling few months for the CEO, on the road in the US and overseas to explain to investors why Square is such a good bet at a time when technology valuations are being questioned.

When I interviewed Dorsey in London last November I put it to him that neither of the two companies he had founded had yet shown that they could make a profit.

"With both Twitter and Square we are focussed on building a network first and building a great experience," he explained.

"And the bottom line always takes care of itself."

That may have worked last year, but now investors will be pondering whether Twitter in particular is looking after either the growth of its network or its bottom line.

I've been pondering whether there are other examples of one man running two major firms at once.

But these are all interlinked firms, with some kind of common purpose.

Another pointed at Jeff Bezos, who owns the Washington Post and another space business Blue Origin, but I can't imagine that either is much of a distraction from his focus on running Amazon.

But the best example was Steve Jobs. When he returned to Apple in 1996 he continued to run Pixar, the computer animation firm he had bought a decade earlier.

Jack Dorsey, another artistic and sometimes sensitive soul, who was also booted out of his own firm in acrimonious circumstances, seems to identify with Apple's founder.

Three years ago, someone even started a Tumblr mocking the way Dorsey appeared to channel Jobs in his words and musical tastes.

If the Twitter and Square founder can lead both companies to a profitable future, he will have earned his place amongst the Silicon Valley greats.

But in the coming months it will be the cynics on Wall Street who will keep an impatient eye on his performance.

Twitter's next earnings statement is on 26 October, so he had better have some good news on user growth up his sleeve.