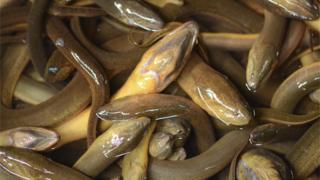 Farming eels is a tricky business.

The slippery customers are extremely sensitive to even the smallest change in water conditions and can die quickly if the farmer doesn't sort out any problem as soon as it occurs.

So local company SK Telecom has been piloting Smart Fish Farm, a hi-tech way to keep an eye on water quality in the fish tanks.

Sensors collect real-time data and transmit it wirelessly over the company's 4G mobile network to its central "internet of things" (IoT) Mobius platform.

Farmers receive emergency alerts to a Care4Fish app on their smartphones, enabling them to monitor the water quality remotely.

During trials over a period of three months, six wireless emergency alerts were issued to an eel farmer's smartphone, successfully preventing the loss of up to 12 tonnes of eels worth nearly $400,000.

SK Telecom plans to expand the project to different species of fish, and different countries.

"However, it entails a high risk caused by the sensitive nature of eels. Lack of timely and appropriate management of the farming environment often leads to massive deaths of eels."

IoT technology may be associated more with the connected home and industrial sectors, but it is having a practical and profound effect on the food and farming sectors, as well.

IT company Cisco predicts that 50 billion devices will be connected to the internet by 2020.

Image copyrighteFisheryImage caption Knowing how much feed is in the water should help reduce costs, eFishery believes

In Indonesia, eFishery has designed an automatic "smart feeder" for fisheries that uses sensors to help farmers dispense the right amount of feed into the water.

The company claims these sensors, working in conjunction with a complex algorithm, can assess how hungry the fish are by measuring the rate at which the feed is depleted in the water.

Boss Gibran Huzaifah says the technology cuts down on wastage and so reduces the cost of feeding fish by up to 21%.

The automated feeding units and sensors cost $700 each, and Mr Huzaifah says his company has received interest from countries like Thailand, Vietnam, China, India, Brazil and Kenya.

"In Indonesia itself, there more than five million farmers, and millions of farms and ponds. Each farm is at least one potential market for eFishery," he says.

And it's not just fish that can benefit from IoT tech - cows have for a long time been the focus of the latest technologies.

Along with fully-automated milking sheds, we now have tail-mounted sensors made by Irish company, Moocall.

These gather more than 600 pieces of data a second and can predict when a cow is most likely to give birth by measuring its tail movements.

Apparently cows flick their tails more the closer they are to calving.

This is important because a cow and its calf can often die during birth, mostly when the farmer is not present to help.

When Moocall founder Niall Austin lost a cow and a calf this way, he sought a solution to the problem.

"The only one he could find was an internal probe," says John Larkin, the firm's head of technology and marketing.

"He had noticed what a lot of other farmers had, that cows move their tails when they are about to calve, and he thought there was something non-invasive that could be done using that knowledge."

Moocall correctly predicts when a cow will calve 95% of the time, the company says.

Not only is this beneficial from an animal welfare point of view, it obviously saves the farmer money, given that a year-old calf can be worth about £1,000.

Media captionOne in, one out: Farmer Chris Bargh talks to Gregg Wallace about his milking robots

Farmers receive a simple text message identifying the individual cow that's about to calve, and the system can work over the basic GSM mobile network - 3G and 4G will come later says Mr Larkin.

Most sales have been made in the UK and Ireland, but Moocall has sold devices to farmers in the US, Canada, South Africa, and Europe.

At £199, and £89 per year after that, the sensors aren't cheap, but Mr Larkin argues that if the system significantly reduces animal mortality, it's "an excellent investment".

Some observers believes the food and agricultural markets are only just waking up to the potential of sensors and IoT.

Brian Geisel, boss of US IoT development firm Geisel Software, told the BBC: "I think there's a lot of things in the agricultural and fish markets they haven't even thought of yet because there was no way to do it. But now the tools are showing up.

"The reduction in cost of sensors means you can put one almost anywhere now. And hardware has got so much better at performance - five years ago it wasn't capable."

But concerns remain, notably with data security and the potential lack of interoperability between competing systems.

Lack of understanding is also an issue.

"With any new technology it takes people a while to figure out how they can best leverage it," Mr Geisel says.

Mr Larkin agrees, saying the only problems Moocall ever encounters are not with the technology itself, but with the human operating it.

"We need to educate users on how to use the device - sometimes people put it on tight, for example," he says.

"Our demographic would not be the most tech savvy - not many of them even have email - but that is improving over time.

"Tech in agriculture is growing rapidly."