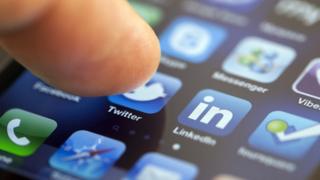 Twitter users will have to watch pre-roll advertising on videos in tweets, thanks to a new service on the platform.

Twitter's Amplify product will insert advertising into relevant videos based on categories chosen by the advertiser.

It bears similarities to the model used by YouTube, which offers payment to YouTubers for featuring short ads before their own content.

Twitter has not yet revealed what cut of advertising revenue it will take.

Pre-roll ads are currently only available to US advertisers and video publishers, though Twitter has said it plans to roll out the feature globally over time.

The BBC understands that the company will take a 30% cut of revenue, with the rest going to publishers who agree to have ads played before their content.

Many of the ads are likely to be repurposed from television, according to IHS analyst Eleni Marouli.

"It's a way to compete with TV ad budgets, which are the biggest in the industry," she said.

"Every online platform is trying to grab a piece of those ad budgets."

Ms Marouli added that part of the reason for increased interest in video advertising was that people who want to watch videos might turn off ad-blocker programmes which remove advertising from web pages.

Otherwise, there would be no way of watching the desired video.

This is unlike ad-blockers for banner ads and pop-ups, which simply appear beside or next to online content.

"If a user wants to watch a video they will turn off the ad-blocker," she said.

However, Ms Marouli also commented that Twitter might have a hard time getting users to feel comfortable with pre-roll ads on the platform compared with YouTube.

"With Twitter it's a little bit more challenging because they have this more immediate, 140 character scroll-through product," she said.