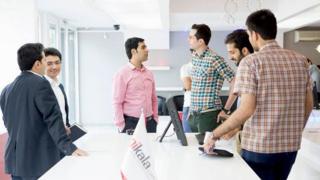 Western business people returning to Iran in the wake of the nuclear deal may be surprised to find plenty of entrepreneurial drive from a new generation of online start-ups, which have appeared despite years of international sanctions.

If Amazon chief Jeff Bezos were to go to Iran today, he would find a lot that looks very familiar.

Set up by brothers Hamid and Saeed Mohammadi, it's the country's sixth most visited website, with a staff of 900 and about 850,000 visitors every day.

"Eight years ago, digital cameras were all the rage," says Hamid. "My brother and I were looking to buy one, but we couldn't find a single Farsi review online."

They ended up buying a camera locally only to discover that the lens wasn't genuine.

"It got us thinking - what if there was a site where you could read all the reviews and reliably buy the product?"

That initial experience led to the creation of a company that combines an online retailing arm with a review site similar to CNet, the US technical review giant.

"We have our own studio and a 100-strong content team," says Hamid. "They test the products and shoot and edit reviews for our Digikala TV."

In many ways Digikala has benefited from what Prof Nader Habibi, of Brandeis University, in the United States, calls the empty playground caused by sanctions

"Companies who rely on foreign trade and imports were harmed the most [by sanctions]," he told the BBC.

"But for domestic digital companies sanctions just kept out reputable brands like Amazon and Google. It actually gave them an opportunity to raise their market share."

Today, the company says it is worth more than $500m.

Despite the damage that sanctions have done to the Iranian economy overall, Digikala has no shortage of customers willing to spend big money on items like top-of-the range smartphones.

For Hamid, this is no contradiction.

"Iran has one of the youngest, most highly educated populations in the region," he says. "For them, technology isn't a luxury. It's the fabric of their lives. They will get it, even if it is difficult to afford."

The biggest internet companies in Iran

Digikala is just one of many internet companies that have sprung up in Iran, taking advantage of a huge spike in internet use over the past two years.

Another popular site is Cafe Bazaar, an Android app store that now has an 85% market share, serving Iranians Google could not reach because of sanctions.

Its bestselling list includes both the globally popular Clash of Clans and locally developed games such as The Bike, which sends up Tehran's notoriously risk-taking motorcyclists.

Takhfifan is a successful Iranian clone of Groupon, offering everything from discounted restaurant deals to spa days and theatre tickets.

And then there's Maman-Paz (meaning "Cooked by a Mum"), which connects hungry office workers to housewives selling home-cooked meals.

The appearance of sites such as these means many Iranians now live their lives between two parallel worlds - the cyber-universe of gadgets, gaming and high-end consumerism, and the more familiar Iran of ultra-conservative clerics, public executions and anti-Western slogans.

The other official Iran is still very much in existence of course, but it no longer has sole control over the narrative, says sociologist Hossein Ghazian, a former adviser to ex-President Mohammad Khatami.

"In Iran you used to have the hegemony of a central official culture," he told the BBC. "Not any more."

Young Iranians in particular are so connected to the world, that they are now "the least anti-Western oriented" people in the region, says Prof Fawas Gerges, of the London School of Economics.

It's a sign of how things are changing that many conservative politicians are now turning to social media to get their message across to the younger generation.

Twitter and Facebook may still be blocked in Iran, but that doesn't stop the country's top brass, including Supreme Leader Ayatollah Khamenei, from regularly using both sites.

"The conservatives' use of these new platforms is not without consequence," says Hossein Ghazian.

In a conservative, authoritarian country such as Iran, entrepreneurs are obviously taking risks and pushing boundaries by running Western-style online businesses.

In interviews they are careful to steer well away from politics, but there are signs that the tide is beginning to turn.

"When 4G first came, it was supposed to be forbidden," says Digikala's Hamid Mohammadi.

"But now, increasing bandwidth is the government's top priority and 4G is everywhere.