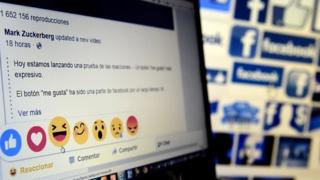 Its most recent Companies House filing shows the company as making a pre-tax loss of £28.5m last year, but the firm also paid its 362 UK staff a total of £35.4m in share bonuses.

It means Facebook's UK corporation tax bill was less than the tax the average UK employee paid on their salary.

The average UK salary is £26,500 on which employees pay a total of £5,392.80 in income tax and national insurance contributions.

In January, Facebook reported global fourth-quarter profits of $701m (£462m), a 34% increase on the same period a year earlier.

Total profits for the year were $2.9bn, almost double its profit for 2013.

Facebook said at the time that advertising revenue grew by 53% to $3.59bn, with nearly 70% of that coming from mobile ad sales.

The social networking giant says it now has 1.39 billion active users each month, a 13% increase from a year ago.

The latest revelations will reignite the debate about how much UK corporation tax companies pay at a time when several multinational corporations are being investigated by the European Commission over the tax arrangements they have with European Union member states.

Google, Amazon, a division of the Fiat motor company and Starbucks are all subject to the investigation and the European Commission has said it could widen its probe further.

The investigation came after Starbucks was revealed to have paid just £8.6m in UK corporation tax in the 14 years between 1998 and 2012, despite making more than £3bn in UK sales in the same period.

Last week, EU finance ministers agreed to boost information sharing in response to the so-called LuxLeaks scandal that emerged last year. The scandal showed Luxembourg had issued hundreds of tax rulings allowing companies to lower their tax bill by funnelling their profits through the country.

A spokesperson for Facebook said: "We are compliant with UK tax law, and in fact in all countries where we have operations and offices. We continue to grow our business activities in the UK."

They added that all the firm's employees paid UK income tax on their payouts.

The company recently secured the lease on a high-profile 227,324 sq ft office space in Rathbone Square, near Tottenham Court Road in London, where it plans to open a new headquarters in 2017.

John O'Connell, director of the Taxpayers' Alliance, said: "Taxpayers will be justifiably confused and angry about this tax bill. But Facebook is right to say that it is complying with UK law, which shows that the problem lies with our complex tax code, and that is what politicians should address as a matter of urgency.

"We have to ensure our taxes are simple to eliminate loopholes, and that taxes are low to increase our competitiveness, so that companies choose to base themselves here."

Conservative MP Mark Garnier, a member of Parliament's Treasury Select Committee told the BBC that even if companies were not breaking any laws, they should think about their moral responsibility.

"It's about the spirit of the law versus the letter of the law. At the end of the day tax evasion is illegal, when you're deliberately setting out to not pay your tax by hiding your money," he said.

"Tax planning is what most people will be doing with their pensions. And tax avoidance is where you take the letter of the law, to get around the spirit of the law, where you're actively seeking a way of using the letters to not pay tax."

In his March Budget, Chancellor George Osborne pressed ahead with plans to introduce a diverted profits tax on companies that moved their profits overseas.

He added that firms that aided tax evasion would also face new penalties and criminal prosecutions.

The so-called "Google Tax" is designed to discourage large companies diverting profits out of the UK to avoid tax.

And last week, an OECD/G20 report found that laws allowing companies to shift profits to low-tax jurisdictions meant between $100bn and $240bn was lost in tax revenues every year - equivalent to between 4% and 10% of global corporate tax revenues.