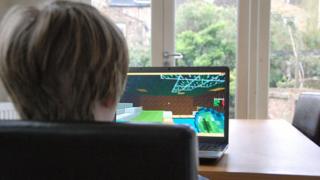 The National Children's Bureau Northern Ireland research involved more than 600 14 to 16-year-olds from 2012-14.

It found 41% of children who used portable gaming devices at least twice a day achieved at least five GCSE A* to C grades, compared with 77% of those who used them less than once a week.

The research does not establish why this might be the case.

The report, ICT and Me, is the first long-term study in Northern Ireland into how a child's use of information and communication technology (ICT) impacts on GCSE attainment.

Although 81% of the young people in the study reported using social media daily, many for several hours, it found no link between social media use and exam performance.

The report says there is "no statistically significant association between pupils' intensity of participating in social networking activities and educational attainment at GCSE level".

Its other main findings include:

While the report recommends the introduction of a targeted scheme by government to ensure all young people have access to a computer or laptop at home, it also recommends that parents or carers limit the amount of time their child uses a games console.

It also recommends that additional research is undertaken to establish why prolific gamers do less well at school.

Celine McStravick, the director of the National Children's Bureau Northern Ireland, said: "Our research shows that using a computer for homework can help pupils consolidate learning and do better in exams.

"So, schools should be regularly setting homework that requires the use of a computer and the internet.

"Similarly, we need parents and carers to step in and limit excessive amounts of time spent gaming."

The research was funded by the Office of the First Minister and Deputy First Minister, a department of Northern Ireland's ruling executive.