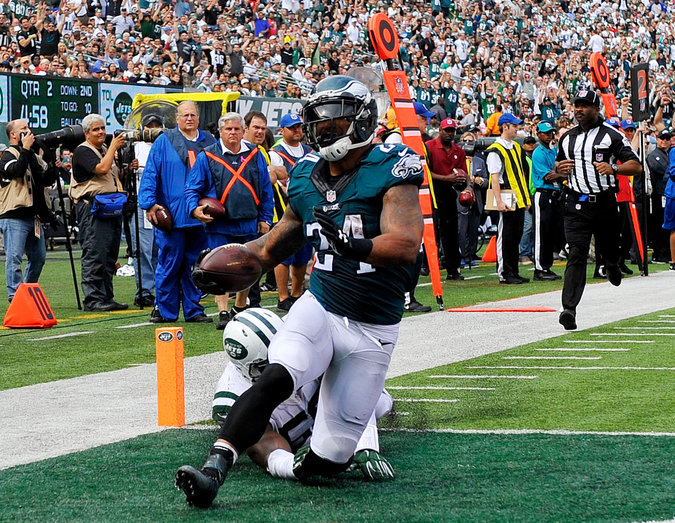 The Eagles' Ryan Mathews reached the end zone for Philadelphia in the second quarter. despite the effort of the Jets' Demario Davis, left.Credit Alex Goodlett/Getty Images

EAST RUTHERFORD, N.J. — The last time the Jets began a season with three consecutive victories, it was six years ago, in Rex Ryan’s first year as coach. That bunch bragged about its swagger and its talent and its defense, about its everything — comporting itself, then, as the antithesis of the Jets under Todd Bowles today.

Bowles demands excellence from his players and expects humility in return. And also perspective.

The Jets changed in silence Sunday after absorbing their first defeat of the season, by 24-17, at the hands of the previously winless Philadelphia Eagles, in a performance that exposed the Jets’ deficiencies and resembled so many other embarrassing showings at MetLife Stadium. The result evoked an opinion offered last week by quarterback Ryan Fitzpatrick, who said the Jets were not good enough to look past Philadelphia.

There were inopportune penalties and missed tackles and misguided tosses — by quarterbacks and receivers alike — and the type of mistakes that could imperil their season if they go unaddressed. Afterward the Jets discussed the critical moments — including a foolish lateral by Brandon Marshall that led to a Philadelphia touchdown; the missed tackles on an 89-yard punt return by Darren Sproles; and the second of Fitzpatrick’s three interceptions, which dashed any legitimate hopes of a comeback — with a certain detachment. 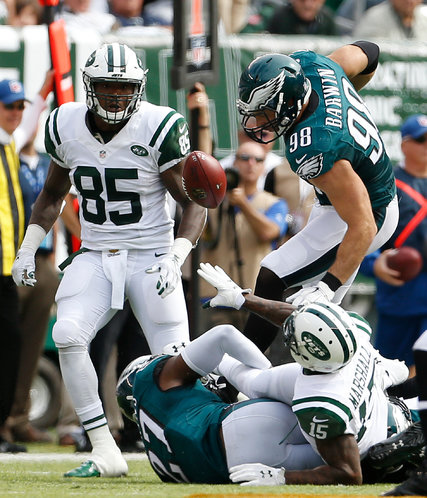 The Jets' Brandon Marshall, right, attempted to lateral the gall while being tackled in the second quarter. The play was ruled a fumble when the Eagles recovered.Credit Adam Hunger/Associated Press

The Jets acknowledged the poor tackling, the opposing receivers they had left open and how they had benefited from several drops by Sproles and Ryan Mathews, who tormented the defense with wheel routes. The Jets were disappointed, not deflated.

As to what that lesson was, Cromartie vowed that the Jets would not start this slowly again. They allowed 24 points — 7 more than they had given up total in victories against Cleveland and Indianapolis — in the first 28 minutes and did not score until six seconds remained before halftime. Unable to handle prosperity — and that whole falling-behind-by-24-points thing — the Jets dropped into a second-place tie in the A.F.C. East with Rex Ryan’s Buffalo Bills, behind unbeaten New England. The Jets also fell to 0-10 against the Eagles.

Through word and deed across their first three games, the Jets have tried to forge an identity. Even with star receivers like Marshall and Eric Decker, they have striven to control the clock with a power running game and have thrived when the defense creates turnovers and shortens the field for Fitzpatrick; four of their six touchdown drives against Cleveland and Indianapolis started inside the opposition’s 29-yard line.

When the defense produces only one takeaway — instead of, say, the five it forced in each of the last two games — the Jets’ offense must perform at maximum efficiency. Even more than other teams, the Jets cannot afford a four-turnover day. Of the Eagles, Bowles said, “They beat us at our own game.”

The absence of Chris Ivory, who said he could have played despite a sore quadriceps, diluted the Jets’ running game (47 yards on 16 rushes) and compelled Fitzpatrick into throwing 58 passes, tying a career high.

Some of those were tipped at the line of scrimmage, a tactic Philadelphia Coach Chip Kelly said his team emphasized all week as the Eagles tried to avoid a loss that would have shoved their season toward oblivion. Aware of how quickly Fitzpatrick tends to release the ball, they sought to disrupt his timing. They clogged the passing lanes, prolonging his time in the pocket and obscuring his view — as they did soon after the Jets narrowed the deficit to 10 on a 7-yard touchdown reception by Jeremy Kerley, playing the slot in place of Decker, with 9 minutes 37 seconds remaining. The Jets regained possession after Demario Davis recovered a fumble. And then Brandon Bair deflected Fitzpatrick’s pass, which fluttered to Jordan Hicks for the interception.

“I might have created a problem for myself there with the way that I moved,” said Fitzpatrick, who completed 35 throws for 283 yards and two touchdowns.

Peyton Manning Takes to the Air, and the Broncos Win

Ben Roethlisberger Out With Knee Injury; Michael Vick In for Steelers

Without Ivory softening the defensive front with his punishing style, the Jets gained all of 23 rushing yards before halftime. Without Decker (knee) drawing coverage away from Marshall, who was double- and even triple-teamed much of the game, the Jets’ passing attack fizzled. On their first six possessions, the Jets managed one first down.

To begin their seventh, which started after they ceded a 23-yard touchdown reception by Mathews that extended the Philadelphia lead to 17-0, Fitzpatrick connected with Marshall for what was to that point the Jets’ longest play, a 15-yard catch. But Marshall, while being tackled, tried to gain a few more yards by lateraling to Jeff Cumberland.

“That was probably the worst play in N.F.L. history,” Marshall said. He added: “You can’t do that. The damage outweighs the reward so much.”

The ball caromed off the helmet of Eagles linebacker Connor Barwin and bounced to Hicks, who returned the fumble 11 yards to the Jets’ 36. Seven plays later, after Davis was penalized 15 yards for slamming Sproles after stopping him, Sproles slipped into the end zone from a yard out. On the sideline, Bowles took Marshall aside and admonished him. 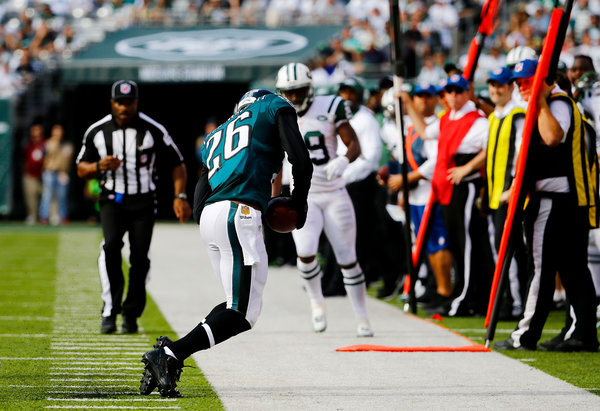 The Eagles Walter Thurmond managed to keep his feet in bounds while hauling in one of Ryan Fitzpatrick's three interceptions.Credit Al Bello/Getty Images

Marshall finished with 10 catches and 109 yards and a touchdown, but he also regretted not extending his arms enough on a Fitzpatrick pass downfield in the fourth quarter. Marshall could only deflect it, into the arms of Walter Thurmond for an interception.

Nick Folk’s 53-yard field goal with 2:34 left made it a one-possession game, but the Eagles recovered the subsequent onside kick and — aided by a Quinton Coples penalty on a third-and-16 that gave them an automatic first down — ran out the clock.

The Eagles poured onto the field, and so did the Jets, who viewed their second-half shutout as little consolation.

Score enough, he meant. The Jets might not have looked past Philadelphia, but when confronted by the Eagles on Sunday, they did not play well enough to win, and they knew it.

Darrelle Revis, who played while nursing a sore groin, sat out the Eagles’ final drive after hurting his hamstring. Those injuries can be temperamental, and Revis said little about it other than “I’ll be fine.” ... Todd Bowles did not have immediate updates on the conditions of two players who left the game with injuries, tight end Jeff Cumberland (head) and guard Willie Colon (knee). ... Geno Smith was the Jets’ backup quarterback in his first game active since a teammate’s punch broke his jaw on Aug. 11.

An earlier version of this article misspelled the surname of a Philadelphia Eagles running back. He is Ryan Mathews, not Matthews.