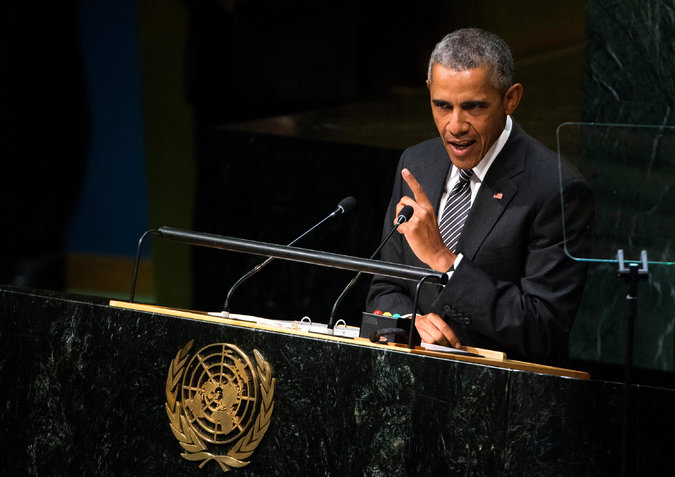 President Obama, speaking at the United Nations on Sunday, was scheduled to address the General Assembly on Monday.Credit Doug Mills/The New York Times

As President Obama makes his way through the halls and chamber of the United Nations with all the other world leaders attending the General Assembly this week, it will be a little like a high school reunion with motorcades.

There will be leaders to avoid (Venezuela, Egypt, Zimbabwe and Uganda), leaders he used to avoid but has made up with (Cuba), leaders with whom he has been feuding but feels the need to make up with (Israel) and leaders who want to avoid him as much as he wants to avoid them (Iran).

There will be those he has seen a lot lately (China, Kenya and Ethiopia) and those he has not and who feel neglected (much of Asia and Eastern Europe). There are those he does not especially want to see but feels he has to (Russia), and those with whom he is genuinely friends and will be happy to catch up with (India and, well, India).

Perhaps more than any other moment, the annual trip to the United Nations challenges a president to balance disparate relationships all at once. This year the tests for Mr. Obama will be especially acute with a swirl of adversaries and frenemies who do not always show up in New York. All eyes will be on the power dance with Xi Jinping of China, a last-minute meeting with Raúl Castro of Cuba, the awkward pas de deux with Hassan Rouhani of Iran and the reluctant get-together with Vladimir V. Putin of Russia.

“It really is the best snapshot of the state of politics in the world all in one building — watching the body language, who’s trying to shake whose hands, who’s trying to avoid shaking hands,” said Nancy E. Soderberg, a senior American diplomat at the United Nations under President Bill Clinton.

For Mr. Obama, who is not much of a schmoozer by inclination, the strained relations with some leaders have less to do with personalities than policy differences. As the president looks around the world, he finds China and Russia eager to flex muscles in their neighborhoods, Arab states wary of the nuclear accord with Iran, Europeans nervous about Mr. Putin and refugees, Asians anxious about incomplete trade negotiations, and much of the Middle East in turmoil.

Mr. Obama arrived in New York on Sunday with a series of goals for the next three days. In addition to pressing Mr. Putin to abide by a cease-fire in Ukraine and to cooperate on Syria, Mr. Obama planned to bolster United Nations peacekeeping, encourage commitments to fight climate change, coordinate efforts against violent extremism and address the refugee crisis engulfing Europe. His big speech comes on Monday, just before Mr. Xi, Mr. Putin, Mr. Rouhani and Mr. Castro each addresses the General Assembly.

Afterward will be the meeting with Mr. Putin, with whom Mr. Obama has a particularly prickly relationship. The two have not met in a formal session for two years, and pre-meeting bickering over who asked for the meeting did not bode well. Mr. Obama once compared Mr. Putin to a “bored kid in the back of the classroom,” and just last week the White House spokesman noted the Russian president’s defiant, spread-legs posture in meetings.

Knowing that he may get nowhere, Mr. Obama plans to measure Mr. Putin’s intentions in sending tanks, combat jets and other military equipment to Syria, where the United States has been conducting airstrikes against the Islamic State, also known as ISIS or ISIL. “President Obama will seek to understand what the Russian government means when it states that it is enhancing or increasing its military involvement in Syria in order to support efforts to counter ISIL,” said Celeste Wallander, the president’s Russia adviser.

Mr. Obama initially agreed to just one other meeting, with Prime Minister Narendra Modi of India, one of the few global leaders with whom Mr. Obama has warm personal relations. But as he flew to New York on Sunday, the White House added two more meetings, the one with Mr. Castro and another with President Nursultan Nazarbayev of Kazakhstan.

The president plans to announce new commitments to United Nations peacekeeping efforts. The organization’s peacekeeping endeavor is at a crossroads, with 124,000 soldiers and police officers deployed in 16 widely varying missions that in some cases have resulted in considerable casualties and poor outcomes. A major problem is that most peacekeepers come from militaries that provide poor air and logistical support, making them slow to deploy and vulnerable to attack.

“We’re going to promise more in the way of capabilities and personnel,” said Susan E. Rice, the president’s national security adviser. “But what we’re also doing is leading the world to galvanize collective contributions that will be quite significant. There will be more than 50 countries making pledges that will well exceed the benchmark we’ve set.”

While at the United Nations, Mr. Obama will find once again that there are more leaders who want to pull him aside, shake his hand or pose for a photo than he can accommodate. “The demand is off the charts,” said Julianne Smith, a former aide to Vice President Joseph R. Biden Jr.

Each year regional officials in the administration lobby furiously for Mr. Obama to meet with leaders from their areas. “I guarantee you there’s a trail of tears” among those who sought and failed to secure bilateral meetings, or “bilats,” Ms. Smith said. “There’s nothing like winning the bilat lottery to make an ally feel appreciated. I hate to say it, but it’s real currency.”

On the other hand, past United Nations sessions have demonstrated the political hazards. Mr. Obama’s predecessors had to share the occasion with leaders like of Muammar el-Qaddafi of Libya, Yasir Arafat of the Palestinian Authority, Fidel Castro of Cuba, Mahmoud Ahmadinejad of Iran and Hugo Chávez of Venezuela.

This year may be easier if only because Mr. Arafat, Mr. Qaddafi and Mr. Chavez are dead and Mr. Ahmadinejad and Mr. Castro are out of office. Moreover, Mr. Obama has made diplomatic breakthroughs with Cuba and Iran. Still, the nuclear accord with Iran is controversial. At a previous United Nations meeting, Mr. Obama and Mr. Rouhani danced around the possibility of a handshake but settled for a telephone call while the Iranian leader was in a car heading to the airport. This year, Mr. Rouhani seems no more eager.

Ms. Soderberg said the riskiest moment is the group photo, when the president has no aides or security close enough to avert an unwanted encounter. But she said leaders had learned to grip the arm of an unwelcome greeter to prevent a worse outcome than a handshake. “Everybody in the U.N. knows that because they don’t want an inappropriate hug from the wrong leader,” she said.

Still, the White House leaves little to chance. As it scans the attendees list, it tries to ensure the president will see only those he wants to and minimize unanticipated encounters. “The poor advance people are navigating this and sweating bullets and trying to get intelligence on where this leader will be at this time,” Ms. Smith said. “You don’t want any awkward bathroom moments.”