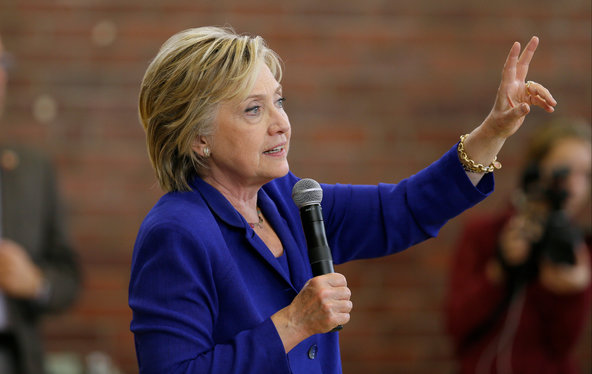 Hillary Rodham Clinton said on Sunday that she could not fully explain the discovery of a string of work emails sent from her personal account more than two months earlier than when she has said she began using that address as secretary of state. But she said she hoped that voters would look past what she called the “drip, drip, drip” of the furor over her emails.

“There was a transition period. You know, I wasn’t that focused on my email,” Mrs. Clinton said on NBC’s “Meet the Press” when asked about emails sent from her personal account in her first two months after taking office in January 2009. She had previously said she did not begin using a clintonemail.com address for State Department business until that March.

The State Department said on Friday that Mrs. Clinton had exchanged emails in late January and February 2009 with Gen. David H. Petraeus, then the commander of the United States Central Command.

Pressed to explain the discrepancy, Mrs. Clinton said it was beyond her technical understanding.

She said the clintonemail.com server had existed in the basement of her family’s home in Chappaqua, N.Y., for years before she added her account. “It apparently took a little time to do that. And so there was about a month where I didn’t have everything already on the server, and we went back, tried to, you know, recover whatever we could recover,” she said. “And I think it’s also fair to say that, you know, there are some things about this that I just can’t control.”

“I am by no means a technical expert,” she added. “I relied on people who were.”

The issue of whether Mrs. Clinton has been forthcoming about when she began using the personal account – This email address is being protected from spambots. You need JavaScript enabled to view it. – is only the latest email-related question to distract from her policy positions and message during her presidential campaign.

In the interview with Chuck Todd of NBC News, which the network allowed reporters to listen to before it was broadcast Sunday morning, Mrs. Clinton repeatedly recalled that New Yorkers had looked past the partisan scandals that had plagued her husband’s presidency in electing her to the Senate.

“The voters of New York, they overlooked all of that, and they looked at my record, and they looked at what I would do for them,” she said. “I was elected senator after going through years of this kind of back and forth. And it is, you know, it’s regrettable, but it’s part of the system.”

In an interview with CNN taped on Thursday, her husband, former President Bill Clinton, placed blame for the email controversy with Republicans who he said wanted to weaken Mrs. Clinton and on a political press corps that he said was uninterested in the substance of her policies.

“I love my husband, and, you know, he does get upset when I am attacked,” she said. “Of course, I take responsibility. It was my choice. It was a mistake back when I did it.”

When Mr. Todd prefaced a question by saying he wanted to pose “an alternative explanation that has sort of been circulating,” Mrs. Clinton laughed. “Another conspiracy theory?” she interjected, repeating a line Mr. Todd had used at the outset of the interview.

The other possible explanation, he said, was that Mrs. Clinton had perhaps used a private server because she planned to run for president in 2016 and wanted to shield her correspondence from any potential congressional investigations or Freedom of Information Act requests.

“It’s totally ridiculous. That never crossed my mind,” she said.

Still, when Mr. Todd suggested that the cycle of allegations, explanations and further explanations by her campaign had “the feel of a drip, drip, drip” and asked if she could reassure Democrats “that there’s nothing else here,” Mrs. Clinton demurred.

“It is like a drip, drip, drip,” she said. “And that’s why I said there’s only so much that I can control.”

Mrs. Clinton repeatedly said she had handed over all work-related emails and had not been involved in her lawyers’ decisions about which emails met that definition. “I didn’t want to be looking over their shoulder. If they thought it was work-related, it would go to the State Department,” she said.

“That’s the limit of my knowledge. And I know I was a little sarcastic about it in one exchange with the press,” she said, alluding to an exchange last month with a Fox News reporter about whether her server had been wiped clean. “Sorry, guys, but you know, I’m not a technical expert.”

At one point, Mr. Todd played a montage of Mrs. Clinton shifting positions on various issues, including same-sex marriage, the Iraq war and the Keystone XL oil pipeline, which she came out against last week.

Asked if her positions had shifted out of political expediency, Mrs. Clinton said, “I don’t think it reflects how people who are thoughtful actually conduct their lives.”

She reiterated that she had hoped to express her opposition to Keystone earlier but had tried to give President Obama and Secretary of State John Kerry time to make their views known first. “It was, frankly, uncomfortable to have so many people asking me and my saying, you know, I’m waiting and waiting and waiting, and it still hasn’t happened,” she said. “I don’t know when it will happen. It may have to happen when I’m president, I hope.”

She said she had evolved on same-sex marriage, just as many Americans had, including Mr. Obama, as she noted. “I was not raised to even imagine this, and I’m thrilled now that it’s the law of the land,” Mrs. Clinton said.

Asked whether Democratic primary voters had increasingly gravitated to Senator Bernie Sanders of Vermont because of his long-time adherence to liberal policies, even when they were unpopular, Mrs. Clinton said, “He can speak for himself, and I certainly respect his views.”

“I can just tell you that I am not someone who, you know, stakes out a position and holds it regardless of the evidence, or regardless of the way that I perceive what’s happening in the world around me,” Mrs. Clinton said, adding: “That’s where the Republicans are.”