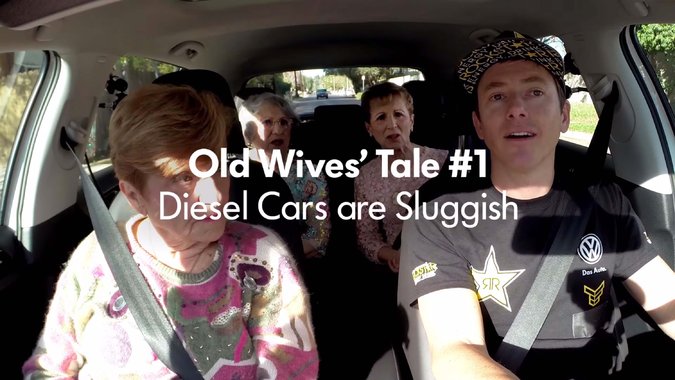 One of a recent series of Volkswagen ads on YouTube featured three sisters debunking old wives’ tales about diesel cars.

Volkswagen’s big push in the United States revolved around making Americans love driving a diesel car again — a challenging task given the poor image diesel had endured since the 1980s.

Its answer was a 2-liter, 4-cylinder turbo-diesel engine that could run seemingly forever on a single tank while offering great acceleration and meeting even the most stringent environmental standards.

The German automaker emphasized that message relentlessly: Diesel cars are fun, quiet, efficient and, most critically, they are clean. In essence, Volkswagen told drivers they could have their cake and eat it.

To deliver its point, Volkswagen has spent $77 million this year to promote its diesel cars, often in a humorous way, a figure that represents about 45 percent of its total for television ad spending of about $165 million, according to the measurement firm iSpot.tv.

A recent series of ads online featured three sisters debunking old wives’ tales about diesel, and marveling at the prowess of the new VW Passat TDI.

In one, they argue about the car’s smell. (It turns out that it comes from the dog, not the diesel.) In another, they disagree about whether the engine is turned off. (It’s on.)

In a third, one of the women asks, “How do you like my new car?” Another jumps in with, “Isn’t diesel dirty?” The first woman ends up holding a white scarf under the tailpipe to show how clean the emissions are.

One of the most prominent diesel TV commercials this year was for the Passat TDI, featuring a mother and rambunctious young boys, which has run more than 3,450 times.

The ads’ mantra of clean diesel that combines high performance with high efficiency came with a bonus for prospective car buyers: The cars were also relatively affordable. For about $30,000, consumers could get a Jetta or Golf 2-liter TDI engine that can be driven 600 miles on a tank of gas and still meet stringent emissions standards.

As it turned out, the German carmaker was taking its customers for a ride.

Since Volkswagen admitted a little more than a week ago that it had lied about the performance of its diesel technology and had sold 11 million cars equipped with a device that cheated on emissions tests, the company has removed its clean diesel ads from its YouTube channel. The last clean diesel ad appears to have run on television on Sept. 21, according to iSpot.tv.

Now, the company that famously introduced the original Beetle as a “Lemon” and urged consumers to “Think Small” faces a public relations crisis, and a major challenge to restore its image.

“It is one thing to make a mistake, it’s another to intentionally trick your customers,” said Sara Roen Brady, a crisis reputation manager based in Florida. “This is a really emotional issue because it’s about the character of the company and the character of their customers. These car owners were making purchase decisions with a sense of purpose. This isn’t like buying a sports car during a midlife crisis.”

She added, “This is such an iconic brand — this is significantly damaging to them.”

Audi, part of the automotive group that includes the Volkswagen brand, targeted a bigger audience with its 2010 Super Bowl ad, drawing on a greener-than-thou image in a parallel world where overzealous “green police” hunt down environmental offenders who drink water out of plastic bottles, overheat their hot tubs or fail to compost properly. In the ad, the Audi A3 TDI is the only car allowed through a police checkpoint.

In July, Volkswagen boasted that a Golf TDI set a record — as measured by Guinness World Records — by being driven more than 8,000 miles and getting an average of 81 miles a gallon. The company said in a news release that the car — which is rated at 45 miles a gallon — also fulfills “the most stringent emissions standards in the world,” known as the Tier 3 standard in the United States.

Restoring the confidence of buyers may prove difficult.

“If your focus is on the brand, the issue comes down to trust,” said Andrew Gilman, the president of CommCore Consulting Group. “How much damage has been done to trust that existing consumers, dealers, shareholders have in the company? How long will the trust issues fester? What can they do to prevent further trust erosion? How long will it take for future customers to trust the company?”

Linsey Marr, a professor in the department of civil and environmental engineering at Virginia Tech who owns a Jetta SportWagen, said she felt betrayed.

“I feel ashamed,” she said.

Professor Marr said she might have known better, since her area of expertise was air quality and she had studied gasoline and diesel emissions.

She added, “I feel completely duped.”

In spite of the scandal, Volkswagen is still running television ads for other products, including one for its App-Connect technology, featuring Adam Scott and Michael Peña. It also ran an ad for the 2015 Jetta for the first time nationally last week, according to iSpot.tv.

It begins: “When you’re driving, things aren’t always what they appear to be.”