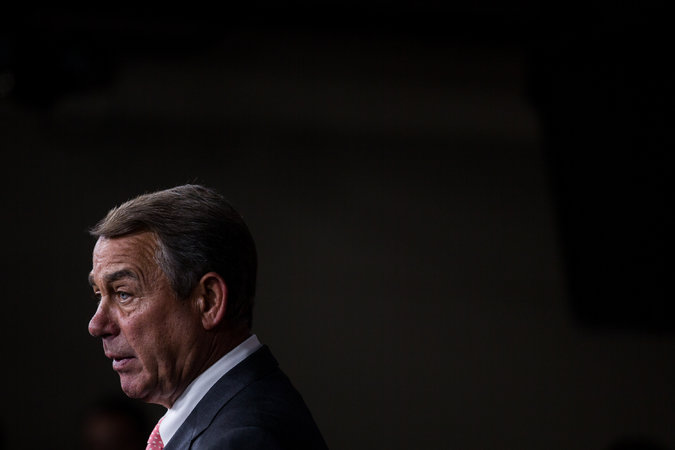 Speaker John A. Boehner during a news conference at the Capitol on Friday.Credit Zach Gibson/The New York Times

WASHINGTON — Far from quelling dissent in the Republican ranks, the resignation of Speaker John A. Boehner is intensifying the divide that has emboldened hard-right lawmakers and insurgent presidential candidates, leaving a party that prides itself on orderly process in uncharacteristic disarray.

The top three candidates in the Republican race at the moment have one thing in common: They have never held elective office. Dozens of members of the House of Representatives have held their seats only since the 2010 election, and many of them ran on a platform to force a drastic reduction in the role of government. A new class of billionaire donors, who can contribute unlimited amounts of money to support a candidate, has undercut the power and relevance of the national party.

While the split will play out soonest in Congress, where Mr. Boehner’s resignation may make it easier to push through a temporary funding measure to keep the government open, the deepening internal Republican rancor will complicate virtually everything on lawmakers’ agenda, and most likely dominate a critical phase of the presidential race just ahead of the first caucus and primary votes.

There are signs of more mainstream conservatives pushing back, saying the tactics demonstrated by hard-liners have accomplished nothing except the early departure of Mr. Boehner.

Others warned against a rightward march, but that is the direction of the moment. An NBC/Wall Street Journal poll released Sunday found that a combined 52 percent of Republican primary voters supported Donald J. Trump, Ben Carson or Carly Fiorina, none of whom has ever been elected to office.

This anti-Washington fervor has prompted the Republican candidates to go to great lengths to portray themselves as change agents primed to topple the party establishment. When Senator Marco Rubio of Florida, one of the candidates, announced Friday at a social conservative conference that Mr. Boehner had resigned, the audience responded with a booming ovation.

Even more notable was that Mr. Rubio, who has spent most of his adult life in politics, sought to align himself with those who forced out the speaker. “The time has come to turn the page and allow a new generation of leadership,” he said, excoriating “the political class.”

Mr. Boehner was leading a House in which Republicans had their largest majority since Herbert Hoover was president. Yet even as he tried to appease members with repeated votes to repeal the Affordable Care Act or to defund Planned Parenthood, more absolutist conservatives were not satisfied.

The hard-line group has not put forward a viable candidate for speaker and, with only 50 or so members, does not have enough to elevate one of its own. While that leaves Mr. Boehner’s No. 2, Kevin McCarthy of California, the majority leader, well positioned to succeed him, it was clear that the speaker’s critics viewed his departure not as a moment to reunify the party but to push harder against the establishment.

The hard-liners seem poised to attack a likely deal this week between Mr. Boehner and Democrats to avoid a government shutdown as yet another example of collusion between establishment Republican leaders and the Obama White House.

And the legislative stakes will become greater. Congress will most likely have to vote this fall on whether to raise the federal debt ceiling as well as deal with the imminent expiration of many highway programs, a continuing debate over reauthorizing the Export-Import Bank and the need for a longer-term spending bill with an expected deadline of Dec. 11.

Standing in the Speaker’s Lobby just off the House floor, Representative Bill Pascrell Jr., Democrat of New Jersey, predicted that Mr. Boehner’s departure would make things harder rather than easier. “November and December are going to be like Dante’s ‘Inferno’ around here,” he said.

How the fight in Congress plays out will also help define the struggle for the party’s national identity. As just one measure: The ranks of its moderates have shrunk to just a few members.

Even as conservatives rage against not having 60 votes in the Senate to overcome Democratic filibusters, or the two-thirds majority needed to override a presidential veto, their fiery language is almost certain to diminish the party’s chances of expanding its majorities. That would require winning seats in swing states and districts, where voters often prefer more centrist views.

“A lurch to the right is suicidal,” said Gregory Slayton, a Republican fund-raiser who backed Gov. Scott Walker of Wisconsin in the presidential race before he dropped out a week ago.

One Republican who has stoked the revolt in the House, Senator Ted Cruz of Texas, has vexed Senate Republican leaders and increasingly found himself isolated on policy debates as he has been in advocating a government shutdown again, this time over Planned Parenthood.

But he is getting support for his presidential bid from the party’s more conservative quarters.

“Something needs to change; the writing is on the wall,” said Michael Needham, who heads Heritage Action for America, a conservative advocacy group that has sharply criticized the party leadership. “Are we going to be the party of the donor class or the party of free enterprise and conservative values?”

Representative Bill Flores of Texas, head of the Republican Study Committee, said the hard-liners often seemed bent on destruction. “If you look at what’s happened the last few weeks, you have had people trying to burn the House down,” he said.

One of the first tests of where Republicans are headed will come in the race to succeed Mr. Boehner. Though Mr. McCarthy is the favorite, many in his party say they do not simply want a reprise of Mr. Boehner’s leadership. There are also contests for the other top positions, and the fiercest fight is expected to be for majority leader. Among the main contenders are Steve Scalise of Louisiana, currently No. 3 in the leadership; the conference chairwoman, Cathy McMorris Rodgers of Washington; and the Budget Committee chairman, Tom Price of Georgia. Conservatives are demanding that one of their own be represented, and it is not clear that Ms. McMorris Rodgers or Mr. Price would satisfy them.

Similar battles are expected for party whip, the No. 3 post, and potentially for the conference chair should Ms. McMorris Rodgers leave that position.

Representative Peter Roskam of Illinois was urging his colleagues not to rush to choose a new team, encouraging them instead to meet and form a concrete plan of action first.

“We need a plan, not a person,” he said in an interview.

Mr. Boehner expressed that exasperation on Sunday, accusing the hard-liners, in an interview on “Face the Nation,” when he was asked if the hard-liners were unrealistic. “Absolutely they’re unrealistic!” he said, almost shouting. “But the Bible says beware of false prophets. And there are people out there spreading noise about how much can get done. I mean, this whole idea that we were going to shut down the government to get rid of Obamacare in 2013, this plan never had chance.”

In the presidential race, party leaders face a delicate balance between appealing to an angry grass-roots hungry to upend the party’s leadership and placating donors who do not want to risk losing the White House for a third straight election.

Mr. Slayton, who called Mr. Cruz “a 45-state-loss prospect in a general election,” said the party needed to find a nominee “who can be a peacemaker and a bridge builder” between factions.

Supporters of Jeb Bush, the former governor of Florida, who began the race as a presumptive favorite, and others believe that activists will eventually become more focused on finding a candidate who can win a general election and move past their early flirtations with outsiders.

“I think over time you’re going to see people coming back to realize that we’ve got to have an adult in the room, a person that can beat a Democrat,” said Fred Zeidman, a Texas contributor to Mr. Bush, who has been eclipsed so far by Mr. Trump.

Mr. Zeidman said Mr. Boehner’s exit worried him a great deal because it might embolden the hard-liners in Congress.

“If we shut the government down, we’re dead,” he said.