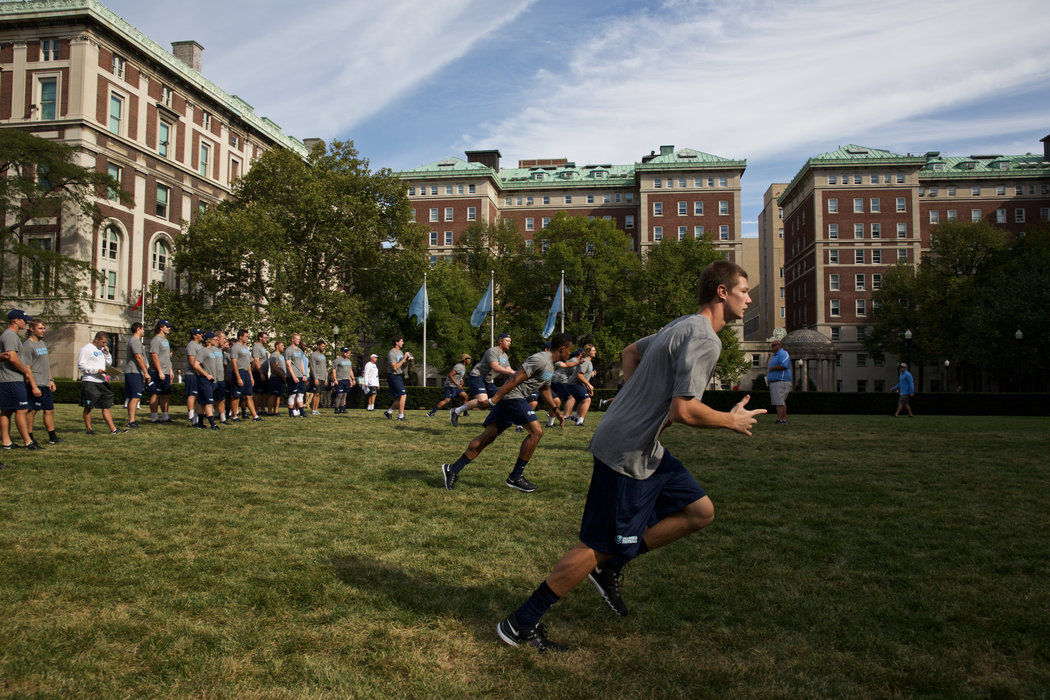 Columbia football players during an on-campus walk-through. The idea to put the Lions close to their fans originated with the new head coach, Al Bagnoli.Credit Benjamin Norman for The New York Times

It was just after 3 p.m. Friday when scores of curious onlookers, mostly wearing backpacks, began to line the yew hedges around Columbia’s South Lawn, snapping pictures of a sight unfamiliar to these grounds for decades. Before them, only a few feet away, was the football team, long a source of considerable embarrassment for a proud Ivy League fan base. But the team was out in the warm sunshine on this September afternoon.

It is a new Friday tradition that harks back to a more glorious era for Columbia, when the football team (and other sports) played before large crowds right in the middle of everything, before Butler Library was constructed in 1934, cutting off the southern part of the campus at 114th Street.

Butler and a handful of Columbia’s other neoclassical buildings used to shield the quad from the noise and bustle of Broadway and Amsterdam Avenue, but now a new sound pierced the din of students shuffling to and from class. Coach Al Bagnoli barked instructions, and players clapped as they broke their huddles. There was also conversation among the observers: Do you think Columbia might win this year?

The idea to host the final walk-through on Friday afternoons before Saturday games on the South Lawn came from Bagnoli, in his first year with Columbia after 23 years guiding Penn. Seeking ways to limit how much time the players spend on their feet, and understanding the commute to Baker Athletics Complex, at 218th Street, can be inconvenient, to put it mildly, Bagnoli saw the green grass in the middle of Columbia’s urban home as an opportunity.

“Given what we do on a Friday,” Bagnoli said, “we figured that was a good place.”

The two lawns, bisected by a pathway leading to Butler’s entrance, measure about 80 feet by 40 feet each, big enough to support the team as it walks through its plays (only those players who are dressing for Saturday’s game get to participate). Bagnoli, like most coaches, uses Friday simply as an opportunity to go over last-minute personnel looks and review the scheme. The players wear T-shirts and shorts, no helmets or cleats.

“The students really don’t get a chance to see them up close and personal,” Bagnoli said. “Just to get them down there in Columbia T-shirts and shorts, it’s positive.”

For many years, the two lawns actually formed a contiguous field, with stands framing the end zones to the east and the west, and the 50-yard line pointed due north, toward Low Memorial Library, the Pantheon-inspired centerpiece of campus. The rotunda in Van Am Quad was an aiming point for kickers. The Hall of Famers Bill Morley and Harold Weekes played there. So did Lou Gehrig, a versatile fullback (and not a bad first baseman, either).

Needing additional space, however, Columbia bought 26 acres in 1921 on a rocky hilltop at the narrow neck of Manhattan, above the estuary known as Spuyten Duyvil Creek. A football stadium was constructed in 1923 and finished in 1928, and the Lions have maintained that spot as their athletic home since.

The distance from campus — about 100 blocks — was at first a boon; Columbia regularly attracted large crowds, and Baker Field was said to have been a selling point in the recruitment of Sid Luckman, a local halfback who became an N.F.L. Hall of Famer. But in more recent years, the separation from campus was thought to be burdensome and tedious, and it became an excuse for the team’s poor performances in front of sparse crowds.

Columbia has taken pains to improve its existing relationship with the Inwood neighborhood, opening the $30 million aluminum-clad Campbell Sports Center in 2012, and providing shuttle bus services to transport athletes to classes and dorms. But attracting students to games on Saturdays has been a struggle. Administrators believed part of the problem was that students felt disconnected from the program.

When the team was bad — and this has often been the case since President Dwight D. Eisenhower was in office — hiding it up north did not seem like such a terrible idea. But with a new coaching staff, and enthusiasm that fortunes will finally turn around (despite a losing streak that reached 23 games Saturday), the timing seemed right.

On Friday, Pilling invited a group of alumni to watch the practice. Among them was Gene Rossides, a star quarterback from 1945 to 1948, who spoke to the team. Rossides said fans had a hard time remembering Columbia’s glory days.

“In our games, you couldn’t get a seat,” Rossides said. “That’s not the case anymore.”

There seemed to be no problem attracting attention on Friday, though, as groups of students gathered within earshot of Bagnoli’s closing remarks to his team.

“Your eyes wandered from time to time, I’m not going to lie,” the junior fullback Mark Cieslak said. “But it’s just walk-through. We should have all our stuff down by then.”