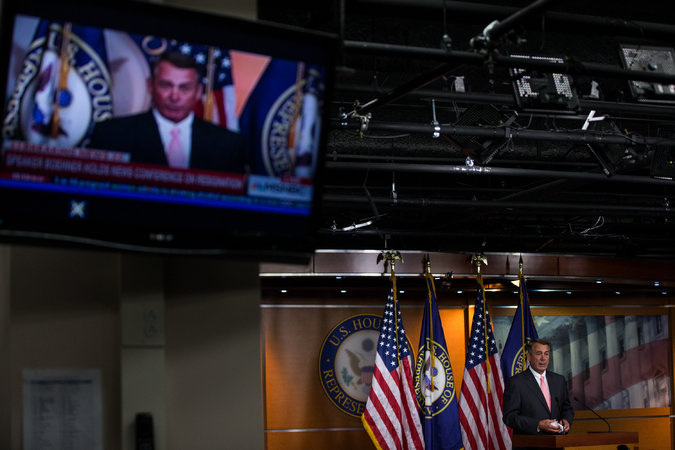 Speaker John A. Boehner at a news conference at the Capitol on Friday after he announced his resignation. Hard-liners had tried to oust him for over a year.Credit Zach Gibson/The New York Times

On Capitol Hill, the conservatives who had again felled one of their leaders rallied to name the terms for the next person to wield the speaker’s gavel.

And on Wall Street, fear set in at the prospect of another showdown over the government’s ability to pay its debt, support its export businesses and simply keep its doors open.

Mr. Boehner’s sudden announcement on Friday that he will step down from the speakership and leave the House on Oct. 30 has thrown Washington into deep uncertainty. His resignation is likely to herald an even more combative stretch in the nation’s capital, emboldening conservatives to defy Mr. Obama on looming decisions regarding spending, debt and taxes.

Some in Congress and the White House hold out hope that Mr. Boehner’s departure and the election of a new speaker will break the fever among conservatives, who have been plotting his downfall for over a year, and grant his replacement a grace period. Mr. Obama promised Friday to “reach out immediately” to the next speaker to begin working on the nation’s problems.

Speaker John A. Boehner announced on Friday that he will resign his position and give up his House seat in October.

But more prevalent is a sense of dread that an already bitter and divisive political atmosphere is about to get even worse.

The Republican presidential primary has been dominated by outsiders like Donald J. Trump, Carly Fiorina and Ben Carson, who have castigated their party’s leadership in Washington. Now, with conservatives claiming Mr. Boehner’s demise as a political victory, many expect his successor to face tremendous pressure to bring that combative spirit to the halls of Congress, and to instigate a showdown with the president over budget limits and the debt ceiling at the end of the year.

Uncompromising conservatives on and off Capitol Hill are demanding the elevation of one of their own to confront the president at every turn. And lawmakers who had pressed to get rid of Mr. Boehner warned Friday that they would not buckle in their defense of those spending limits, even in response to veto threats by Mr. Obama that could lead to a Christmastime stalemate and government shutdown.

“To get members to bust the budget caps, they have to threaten a Christmas-vacation shutdown for members of Congress,” said Representative Thomas Massie, Republican of Kentucky and one of the rebels who pushed for Mr. Boehner’s overthrow. “Heaven help the speaker who replaces John Boehner and goes along with that charade.”

Mr. Boehner’s decision is likely to smooth a short-term path around a government shutdown at the end of the month. But the real showdown looms on Dec. 11, when a stopgap spending bill expected to pass this week would expire, meaning Congress and the president would have to find a way to fund the government through next September and raise its borrowing limit.

The new speaker, elevated to the country’s third-highest constitutional post by a conservative rebellion, will face demands from those same rebels to extract concessions from a president who has little to lose by standing firm. At stake for conservatives will be the one clear victory they have scored since the Tea Party revolution of 2010: firm statutory limits on spending signed into law in 2011, which Mr. Obama has said he can no longer abide.

In turn, the Republican Party, already wrestling with the effect of Mr. Trump’s populist insurgency on its chances at the White House, could find itself with the political challenge of justifying to moderate voters yet another Washington crisis, prompted by an even more obstreperous, confrontational House majority.

“Having been hoisted to the speaker’s chair by what was essentially a revolt,” David Axelrod, a former senior adviser to Mr. Obama, predicted, the next speaker will not have the freedom to compromise with the president.

“This group is not installing him to pursue compromise and mutual cooperation,” Mr. Axelrod said.

Presidential aides have begun to take stock of a changed political landscape that could include some last-minute deal-making with Mr. Boehner before he heads back to Ohio. There could be a longer-term budget agreement that also deals with raising the nation’s debt ceiling, and possibly even a major infrastructure bill, long talked about and long stalled. 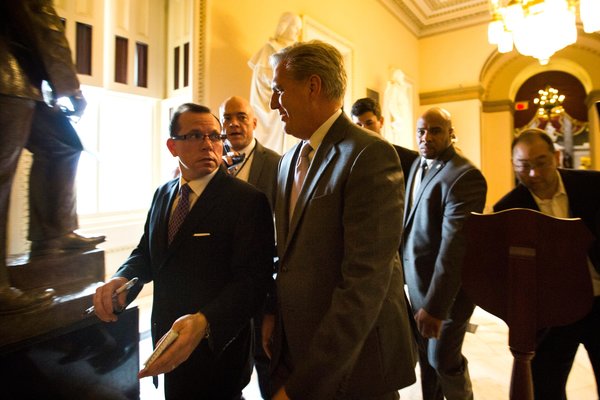 “John’s not going to leave for another 30 days, so hopefully he feels like getting as much stuff done as he possibly can,” Mr. Obama said during a news conference with the Chinese president on Friday.

Looking at the long term, Democrats in Washington wondered whether Republicans wanted to show Americans they could govern, if only as a means to win back the White House and keep control of the Congress that they fought so hard to gain.

“For most Republicans, resolving these issues now, instead of having the government shut down in December, would be a political plus,” Phil Schiliro, Mr. Obama’s former chief liaison to Congress, said. If the next speaker “decided that he wanted now to do a fair amount of business, there’s a window to do that.”

But Mr. Schiliro, too, expressed some pessimism, adding, “At its core, there’s a group of members in the House Republican caucus who affirmatively don’t want to govern if that means compromise. And governing always means compromise.”

If Mr. Boehner’s replacement is given some breathing room, the president, the new speaker and Senator Mitch McConnell of Kentucky, the majority leader, could fashion a compromise that lifts the debt ceiling, raises spending limits and includes savings in programs such as Medicare or veterans’ pensions to keep overall spending tamed.

“The restlessness that folks feel when they feel emboldened, some of that is alleviated when there is a new election,” said Tim Griffin, the lieutenant governor of Arkansas, who was a Boehner loyalist before retiring from the House in 2014. “They feel like: ‘We tried. We got whatever we could get. Now, let’s get some things done.’ ”

Other Republicans were not so sanguine.

“If Boehner had stayed through December, you’d feel better about this,” said Tom Davis, a retired House member from Virginia. “Now you’ve really emboldened the right. They feel at least they have a head on the mantel.”

Nor is Wall Street optimistic. Chris Krueger of the investment firm Guggenheim Partners told clients on Friday that he was raising the prospects of a damaging showdown on the debt ceiling. He dismissed hopes that Mr. Boehner was about to play a bipartisan Mr. Fix-It on his way out the door.

“Essentially, Boehner is the kindergarten teacher who is leaving his flock unsupervised and wants to get all the sharp objects out of the room before he goes off into the sunset,” Mr. Krueger wrote.

Already, those who have egged on the rebellion are showing no willingness to give the next speaker much room for compromise. Before the news of Mr. Boehner’s decision had even sunk in, conservative knives were out for the heir apparent, Kevin McCarthy of California, the House majority leader.

Mr. Massie, the Kentucky Republican, said simply moving the leadership below Mr. Boehner “up one notch” would show that the party remained “tone deaf” to the discontent that swept Mr. Boehner from the stage.

Not content with one political casualty, the Tea Party Patriots created FireTheLeader.com on Friday to drum up support to replace Mr. McConnell in the Senate leadership. Mr. Schiliro compared conservatives in Washington to people sipping water from an “unquenchable cup.” He said they would not be satisfied by Mr. Boehner’s fall.

And come December, the first ballots of the presidential campaign will be just weeks away in a Republican race dominated thus far by outsiders.

“In a normal year, there would be a grace period, but you’ve got guys like Ted Cruz looking for a national platform,” said Matt Kibbe, the former head of the Tea Party group FreedomWorks, who has been jousting with Republican leaders for years. “If McCarthy picks up the torch and runs the same direction, it’s going to get worse, not better.”

Mr. Axelrod called Mr. Boehner’s resignation a “caustic mix” in the midst of “a presidential race in which the same factions are warring.”

“It’s going to be a minefield to navigate,” he said.

The outside conservative groups that Mr. Boehner had openly clashed with, and thought he had bested, claimed victory on Friday and immediately began organizing to elect a more strident conservative to lead the House through Mr. Obama’s final 15 months.

Such efforts may not block Mr. McCarthy’s path, but they could force his campaign for the gavel farther to the right. Worries about his right flank helped prompt him last year to embrace the demise of the Export-Import Bank, the 81-year-old federal export credit agency, which has long had bipartisan support but has of late become a target for conservatives.

Mr. McCarthy will have to appeal to every end of the House Republican Conference to secure 218 votes in an open election for the speakership next month. Jenny Beth Martin, leader of the Tea Party Patriots, is already enumerating demands: an immediate vote on ending subsidies for members of Congress and the administration to buy health insurance under the Affordable Care Act; no debt ceiling increase without a balanced budget in five years; and, far from lifting the caps, a 1 percent cut in spending on all government programs over the next five years.

Hours after Mr. Boehner’s announcement, Representative Roger Williams, Republican of Texas and one of the conservative hard-liners, warned, “I hope all Republicans, including those in the Senate, are listening to what grass-roots conservatives are saying: It is time for conservative leadership and conservative principles.”