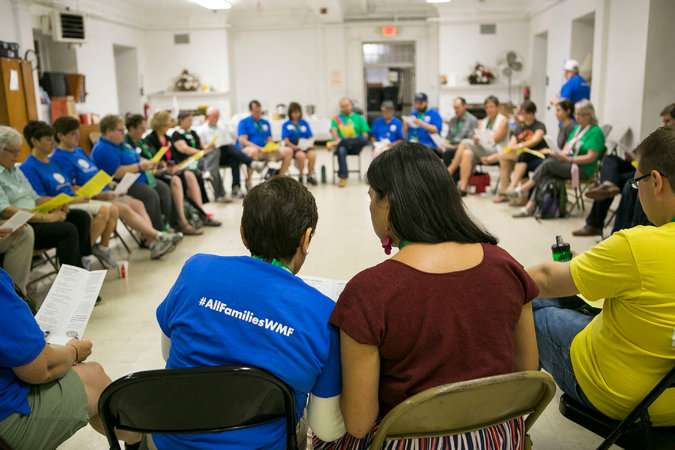 Nicole Santamaria, 35, right, and her mother, Vilma Santamaria, 68, joined with pilgrims and L.G.B.T.Q.I. Catholics at Arch Street United Methodist Church after a day at the World Meeting of Families in Philadelphia on Friday.Credit Jessica Kourkounis for The New York Times

PHILADELPHIA — Cardinal Gerhard Ludwig Müller, the Vatican’s chief doctrinal watchdog, sat cross-legged in front of a large television on Friday and watched Pope Francis at the United Nations addressing a world that has warmed to the pontiff’s merciful message on issues like immigration, the poor and climate change.

“If the pope speaks about social justice, everybody will embrace him, no?” the cardinal said. “It’s not so difficult. But to speak about moral values, and the field of sexuality and matrimony and abortion and these values, is more conflictive.”

The cardinal, a conservative German in black clerical clothing, said neither the pontiff, nor his church, cared whether “Obama says the pope is a very good man” or whether a “fallible” Supreme Court legalized gay marriage. And if papal proclamations of Catholic doctrine on core issues of family have eroded Francis’ global standing, so be it.

Francis in America: Pope Francis, in New York, Takes On Extremism and InequalitySEPT. 25, 2015

Francis in America: Pope Francis on Abortion and Other IssuesSEPT. 21, 2015

But Cardinal Müller is no objective papal observer. He is a leading voice in the orthodox wing of the Catholic Church that worries that outsize attention on Francis’ welcoming, pastoral style could distract from the church’s core beliefs.

He is one of many conservatives who, without challenging the immensely popular pope head-on, have sought to weather the so-called Francis effect by inculcating the next generation of faithful with their own priorities: church tradition, culture and rules.

Now they are parsing his comments this weekend in Philadelphia, where he arrived Saturday, for anything that would bolster their case as they head into next month’s synod of bishops in Rome focused on the family. Many of them have been looking to dampen any prospect of welcoming people in same-sex relationships or divorced and remarried Catholics back into the fold, or women into the priesthood.

But as Saturday went on, Francis, a Jesuit priest and master politician who defies, and despises, narrow interpretations, seemed to be once again slipping the conservatives’ grasp with broad and generous calls for tolerance and contemplation.

“Family is like a factory of hope,” the pope said in his extended off-script remarks at the Festival of Families on the Benjamin Franklin Parkway on Saturday night. He spoke with verve about the importance of grandparents and children, of husbands and wives, even making a joke about mothers-in-law and adding, “In the family there are indeed difficulties but those difficulties are overcome with love.”

It delighted the enormous crowd but was hardly the stuff of conservative culture wars.

Those who know Francis said they did not expect his other remarks this weekend to give fodder to conservatives or, for that matter, directly address the issues in the church that liberal Catholics have championed.

Among them is the question — to be taken up at the synod — of whether divorced-and-remarried Catholics should be able to receive communion.

Cardinal Müller thinks it is a nonstarter, and he said there was “no systematic distinction” between his office’s view and that of the pope.

He added that any confusion arose from a liberal media, not a Jesuit pontiff whipping up debate.

He also blamed ideological partisans for exploiting the pope’s words, including a famous phrase of his — “Who am I to judge?” — when speaking of gays.

“The homosexual lobbies aren’t so much interested in the health and the salvation of these people,” Cardinal Müller said.

And he said that “it’s not possible” for those who have violated church doctrine with regard to divorce, homosexuality or abortion to be fully welcomed back into the church: “It’s not an academic doctrine. It’s the word of God.”

In corners of this church’s triennial World Meeting of Families, at meetings titled “Homosexuality in the Family” and “The Family: A Home for the Wounded Heart,” that hard line has left bruises.

In Room 114 of the Pennsylvania Convention Center on Thursday, Rose Sweet, creator of “The Catholic’s Divorce Survival Guide,” a DVD series, stood in front of an audience that had come to a talk called “I Am With You: Struggling With Divorce.” One woman said that when she hears fellow Catholics attacking no-fault divorce, “I am ready to wield machetes because I was married to a sociopath.”

Another woman left the room in tears.

“I am very unhappy with and disappointed in my church that I love,” said Donna Waechter, a recently divorced 61-year-old who wore a Pope Francis button and is pursuing a fast-track annulment. “There is zero, no ministry, to divorced Catholics.”

Ms. Sweet urged the purchase of her 12-DVD series, but also recommended the mantra of “Listen, Leave, Love and Let Go.” It was an answer Ms. Waechter found lacking.

Instead she held out hope in the pope’s effort to “stir things up,” but she expressed bewilderment at the hurdles she had to go for an annulment.

“Are we in the Dark Ages?” she asked.

Bridget Mary Meehan, a bishop in the Association of Roman Catholic Women Priests, a splinter group that ordains women, said that while she loved Pope Francis, the media “had gone bonkers” in its adoration of him despite his doctrinal orthodoxy on women.

“He has a big blind spot on women,” she said as she stood in a hallway next to a cake that bore the words “Many Women, One Spirit.” “He doesn’t understand that women are full, responsible moral agents.”

Theology of Diversity and Solidarity

In a handsome stone Quaker retreat about a half-hour outside Philadelphia on Thursday afternoon, Ms. Meehan and dozens of other women in white robes sang hymns among signs reading “Women Priests Are Here” and “Archaeology Says Yes” (a reference to whether women served as priests and bishops of the early church).

“We are changing the church one inclusive community at a time,” Ms. Meehan said, adding that by living what she called gospel equality, “we are like the Rosa Parks of the Catholic Church” and helping it “grow into a more inclusive family.”

Francis has no room for such women at the head of the table, opposing ordaining women and making women nonclerical cardinals, as was done in earlier times.

While he has advocated a “deeper theology” about the place of women in the church and a “greater role” for women in its decision making, he has also said he believes such women suffer from a “machismo” that negates the real differences, and contributions, between men and women.

In his homily Saturday morning at the Cathedral Basilica of SS. Peter and Paul, he spoke at length about women, but provided no opening for expanding their roles in liturgical life. He relied instead on appreciation for their current status and efforts, praising “the immense contribution which women, lay and religious, have made and continue to make to the life of our communities.”

That laudatory message, along with the pope’s emphasis on social justice, has won him the adoration of even liberal nuns like Sister Mary Scullion, a pioneering advocate for Philadelphia’s homeless, who said the pontiff “couldn’t be coming at a better time.” 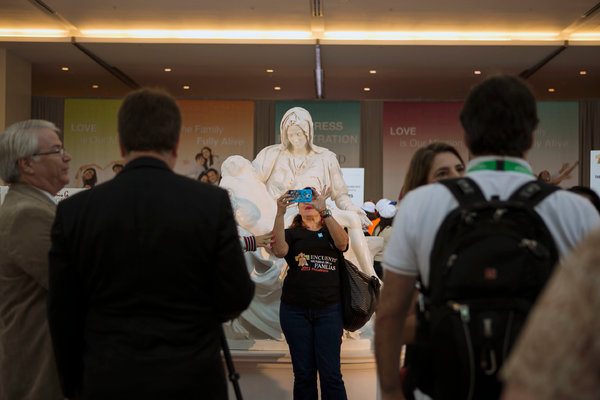 Pilgrims attending the World Meeting of Families convention posed by a replica of Michelangelo's Pietà in Philadelphia on Friday.Credit Jessica Kourkounis for The New York Times

On the eve of his arrival, his top lieutenants were eager to shift attention away from the church’s differences with women, or debates about how welcoming the institution would be toward divorced Catholics in its Rome meeting next month.

“It is not a time to fight, it is a time to build,” said Archbishop Vincenzo Paglia, the president of the Pontifical Council for the Family. “Our message is: ‘Dear friends, if we rebuild family, we will rebuild the society.’ “

Some bishops were amused at the controversy the pontiff’s seeming openness to addressing certain doctrinal issues had caused.

“I always remind myself that he is a Jesuit,” said Bishop Robert Llanos from Trinidad and Tobago, “and part of the training is you always encourage debate.”

He shrugged when asked about millions of ex-Catholics in the United States and the desire among many of them to see the church loosen up some of its laws.

“It’s not for reasons of our Catholic doctrine” that they left, he said, noting that the world is large, and that while Catholic numbers were down in some places, they were up in others.

“We can’t be like a political party to change our program only for good votes,” he said. “We are not candidates for the presidency.”