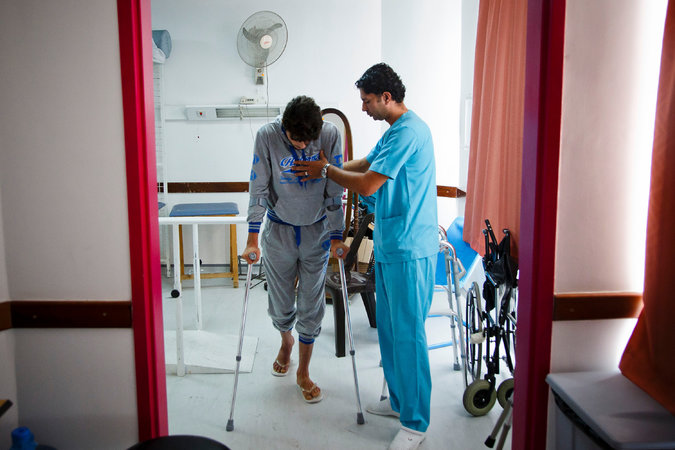 Mohammad Smarat, who was shot near his home in Syria, with Saleem Omar, a physiotherapist, at a hospital in Amman, Jordan.Credit Warrick Page for The New York Times

AMMAN, Jordan — Mohammad Smarat sat gazing at the few plants sprouting outside the entrance of the white stone hospital here, recalling how he had collapsed in a sea of green fields after getting shot.

He had been helping farmers pick tomatoes near his home in Dara’a, Syria, when a stray bullet shattered his left hip joint. Though he had obeyed his father’s orders not to join the fight against the forces of President Bashar al-Assad, Mr. Smarat found himself lying wounded in the field anyway — yet another casualty of a war that has killed nearly 250,000 people.

“I saw towns besieged, corpses burned and bodies left on the street,” said Mr. Smarat, a shy 21-year-old. “I did not have it in me to be a part of it, yet one cannot escape from the conflict. It was fate.”

Like other patients recovering from surgery at this hospital in the security of Jordan, Mr. Smarat spent many afternoons sitting on a black leather chair on a patio overlooking a range of arid mountains in the distance and dreaming of home.

As the Syrian civil war, which started in 2011, stretches on, and the numbers of killed and wounded soar, growing numbers of people like Mr. Smarat are crossing the border into Jordan for treatment at hospitals that are more secure than back home, where medical facilities have been devastated.

The United Nations has accused Mr. Assad’s forces of targeting hospitals in rebel-controlled areas of Syria, and Physicians for Human Rights has documented nearly 300 such attacks since the conflict began. Medical aid organizations have also pulled their workers out of Syria, after 13 Doctors Without Borders employees were abducted by the Islamic State last year.

The Amman surgical program, run by Doctors Without Borders, was set up in 2006 to care for the war-wounded from Iraq. At first, the organization renovated a floor of a hospital belonging to the Red Crescent in Jordan, but the program has expanded to treat victims of the many wars raging in the region — in Iraq, Libya, Syria and Yemen.

This month, Doctors Without Borders officially opened a new eight-story reconstructive surgery hospital here. The hospital will handle a growing number of casualties, mainly from the war in Syria, as the wounded arrive in need of amputations and treatment for shrapnel wounds and burns from bombs.

Physiotherapists and mental health counselors will also help those brought here to handle life after injury.

“It’s not only about closing the wound,” said Marc Schakal, Doctors Without Borders’ head of mission for Jordan and Iraq. “It’s about helping people to live with the disability and improve their lives as much as possible here, to help them go back to their home country with better acceptance and functionality.”

Since the surgical program began in 2006, more than 3,500 patients from across the region have received free medical care, at a cost to the group of $8,000 to $11,500 per patient. Doctors Without Borders says that more than 1,000 Syrians have been treated at the old and new Jordan facilities since the conflict began.

A public hospital in the northern town of Ramtha, just three miles from the Syrian border, also receives wounded Syrians. Often, neighbors, friends or relatives take the wounded from field hospitals inside Syria to the border, where Jordanian ambulances wait on the other side to transport them.

Mr. Smarat arrived at the Jordanian border after doctors at a field hospital in his hometown said he needed surgery that they could not perform. He was taken by car to the border, where a Jordanian ambulance transported him to the hospital in Ramtha. There, a metal rod was inserted in his side where his hip bone was shattered, as a temporary measure, before he was moved to the hospital in Amman.

The hospital here is clean and shiny, a far cry from the crowded and grimy facility in Ramtha, and Mr. Smarat spent a month and a half here in relative comfort before returning to Syria on Sept. 14.

In an empty hospital room here recently, men, both young and old, passed the time between surgeries or the long months of physiotherapy sessions by playing dominoes and Monopoly.

In the corridors, restless girls and boys — some with severe face burns, others with head bandages and amputated limbs — roamed the hospital corridors, playing games like tag.

Continue reading the main story Graphic How Syrians Are Dying Over four years of war has forced more than four million to flee the country, fueling a migrant crisis in the Middle East and Europe. 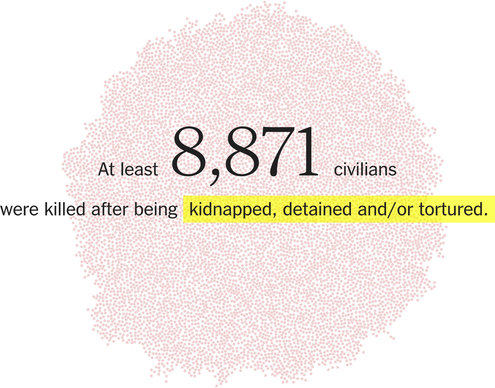 Some are victims of domestic accidents, but a majority of them have been wounded in war, including civilians and non-civilians from Syria. There are also people from places like Najaf and Kirkuk in Iraq and from central Yemen, which has been engulfed in conflict for the past six months after Houthi rebels ousted the government.

Fatima Qataish, 9, escaped from Syria with her family in 2012, fleeing to Jordan, where they settled in the Zaatari refugee camp. Soon after arriving there, she tripped into a pot of boiling oil, sustaining severe burns to her head. She underwent several unsuccessful operations at other hospitals across the country, some resulting in infections, her father, Anees Qataish, said, before Doctors Without Borders took her case last year. Last month, surgeons inflated a balloon under her scalp to stretch the skin and grow new hair.

Only three days after the surgery, Fatima chased around two younger girls with severe burns on their faces and feet — the result of a missile that fell on their house in Homs, Syria.

“My parents already lost two of their children,” Fatima said. One died of leukemia and the other was run over by a car in the turmoil of the war, she said. “All of what happened to us is a test of patience for people like my father, but also for the Syrian people.”

Elsewhere in the hospital, four young Syrian men lay in their beds with shrapnel wounds in their legs and arms caused by barrel bombs, doctors said. Most of the recent arrivals at the hospital had injuries caused by bombs.

“The region today has a big capacity to produce injured people,” Mr. Schakal said. “When we have access in places like Syria and Yemen, which we don’t really have right now, we expect that we will find a lot of people that need reconstructive surgery.”

Frederique Drogoul, a psychiatrist for Doctors Without Borders, based in Paris, said many wounded patients showed signs of post-traumatic stress.

“Not only do the patients have wounds from injuries, but they are traumatized because of war,” she said by phone from Paris. “They also stay a long time in the hospital, isolated from their communities, and they need a lot of support.”

Saad Shayieh, 33, an Iraqi, lost two brothers in 2006 when gunmen shot them in Baghdad, accusing them of working for an American company.

Two years later, both of his parents and another sibling were killed when a missile fell on their home. When Mr. Shayieh ran to his house to see what had happened, chunks of concrete fell on top of him, breaking his thigh bone and shattering all his teeth.

With surgery and the help of a shoe lift to compensate for a discrepancy between the lengths of his legs, he is able to walk now.

He has been receiving medical care for nearly three months, recovering near the hospital and returning often for physiotherapy sessions. “I am tired,” he said. “Tired, tired, tired.”

Unlike Mr. Smarat from Syria, Mr. Shayieh does not want to return home.

“I am not living,” he said. “I am stuck and thinking how I can start over in a country like Sweden.”