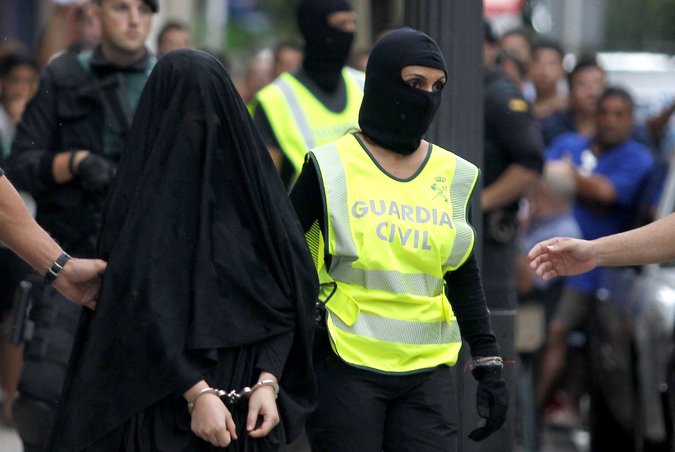 A Moroccan woman suspected of recruiting other women to join the Islamic State, also known as ISIS or ISIL, was arrested by Spanish police on Sept. 5, 2015.Credit Jose Jordan/Agence France-Presse — Getty Images

WASHINGTON — Nearly 30,000 foreign recruits have now poured into Syria, many to join the Islamic State, a doubling of volunteers in just the past 12 months and stark evidence that an international effort to tighten borders, share intelligence and enforce antiterrorism laws is not diminishing the ranks of new militant fighters.

Among those who have entered or tried to enter the conflict in Iraq or Syria are more than 250 Americans, up from about 100 a year ago, according to intelligence and law enforcement officials.

President Obama will take stock of the international campaign to counter the Islamic State at the United Nations on Tuesday, a public accounting that comes as American intelligence analysts have been preparing a confidential assessment that concludes that nearly 30,000 foreign fighters have traveled to Iraq and Syria from more than 100 countries since 2011. A year ago, the same officials estimated that flow to be about 15,000 combatants from 80 countries, mostly to join the Islamic State.

That grim appraisal coincides with the scheduled release on Tuesday of a six-month, bipartisan congressional investigation into terrorist and foreign fighter travel, which concludes that “despite concerted efforts to stem the flow, we have largely failed to stop Americans from traveling overseas to join jihadists.”

Other parts of the Obama administration’s policies on Syria and for combating the Islamic State have suffered significant setbacks, as well.

A $500 million Pentagon effort to train rebel forces to take on the Islamic State in Syria has produced only a handful of fighters. Russia has defied American attempts to block Moscow’s buildup of a new air base with warplanes in Syria — a topic Mr. Obama will discuss with President Vladimir V. Putin of Russia at the United Nations on Monday. And in a break in continuity for the mission, John R. Allen, the retired four-star general who since September 2014 has served as the diplomatic envoy coordinating the coalition against the Islamic State, has told the White House that he will step down at the end of the year.

The focus on shortcomings in the global effort to combat the Islamic State, also known as ISIL or ISIS, is playing out as tens of thousands of refugees flee strife in the Middle East and North Africa, including many seeking to escape the violence in Syria and oppression in areas under the control of the Islamic State.

A year ago, Mr. Obama and other top American officials spent a great deal of diplomatic capital rallying support for a legally binding Security Council resolution that would compel all 193 United Nations member states to take steps to “prevent and suppress” the flow of their citizens into the arms of groups that each country considers to be a terrorist organization.

Continue reading the main story Graphic Where ISIS Has Directed and Inspired Attacks Around the World At least a dozen countries have had attacks since last summer. A Mississippi couple are among the latest in a string of ISIS-related arrests in the United States this year. 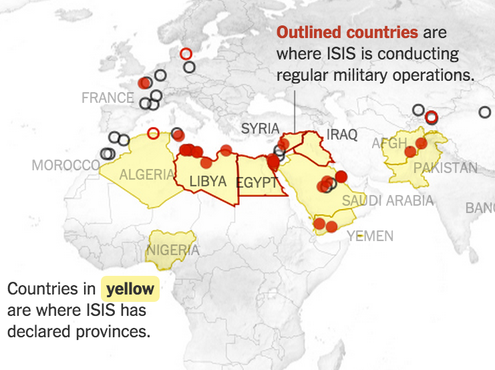 But this month, Tina S. Kaidanow, the State Department’s top counterterrorism official, offered a sobering summation of the foreign fighter problem. “The trend is still upward,” Ms. Kaidanow said. “We’re going to see that for the whole gamut of reasons.” Mainly, she added, because of the Islamic State’s unprecedented ability to recruit and to radicalize followers over the Internet and on social media.

At the United Nations meeting on Tuesday, chaired by the president, the heads of state and government from Iraq, Nigeria and Norway will speak; all told, 104 countries have been invited to the event. Iran has not been invited, American officials said.

Despite Pentagon reports that coalition strikes have killed about 10,000 Islamic State fighters, the group continues to replenish its ranks, drawing an average of about 1,000 fighters a month. The government several months ago last publicly assessed the flow at “more than 25,000,” including at least 4,500 from the West. Given the region’s porous borders, American officials emphasize that their figures are rough estimates not precise head counts, based on allies’ reports on citizens’ travel and other intelligence, which vary by country.

“By now there is a ‘network effect’ where friends, family are bringing along other friends and family,” said Daniel L. Byman, a counterterrorism expert who is a professor at Georgetown University and a fellow at the Brookings Institution.

In a new bipartisan report after a six-month investigation, the House Homeland Security Committee criticizes the administration and its allies for failing to do more to combat the threat from foreign fighters.

President Obama spoke about ways to counter the radical ideologies of groups like Al Qaeda and the Islamic State during a speech at the United Nations General Assembly in September 2014.

By UNTV and VIA ASSOCIATED PRESS on Publish Date September 26, 2015. Watch in Times Video »

“Foreign partners are still sharing information about terrorist suspects in a manner which is ad hoc, intermittent, and often incomplete,” says the 85-page report. Its release is timed to the meeting at the United Nations. “There is currently no comprehensive global database of foreign fighter names,” it says. “Instead, countries including the U.S. rely on a weak, patchwork system for swapping individual extremist identities.”

Some counterterrorism analysts have identified what they say are more positive trends. The more than 7,000 military strikes against Islamic State in Iraq and Syria have largely contained the group in its core territory, they say, and international efforts to strengthen border security and share information about suspected fighters have largely stopped the Islamic State from expanding at the accelerated pace it did in the summer of 2014. Other indicators also suggest that the Islamic State’s ability to recruit and retain followers may be slowing.

A small but growing number of defectors from the Islamic State are risking reprisals and imprisonment to speak out about their disillusionment with the extremist group, according to a report published this month by the International Center for the Study for Radicalization at King’s College London.

“ISIS no longer has the momentum in its core territory of Syria and Iraq,” said Peter Neumann, director of the center and a professor of security studies at King’s College. “It’s no longer the ever-expanding jihadist utopia that it seemed to be.”

In Britain, more than 750 people have traveled to take part in terrorist-related activity in Syria and Iraq, up from about 500 a year ago. About half of those have returned home, raising fears that they could carry out attacks on British soil. And since September 2014, 34 countries, including the United States, have arrested foreign terrorist fighters or aspirants. The United States has active criminal cases against almost 50 foreign fighter suspects.

The United Nations Counter-Terrorism office has recommended that countries take urgent measures to disrupt travel by would-be fighters. At the moment, only five of 21 high-priority countries surveyed require advance passenger information or passenger name records, making it virtually impossible to flag suspects who might be flying to conflict zones in incremental steps, rather than taking direct flights that would invite scrutiny.

Most countries have passed laws to restrict “incitement” to terrorist acts, but in some places those laws are so broad that they prevent free expression. Most countries, however, do not have laws that enable them to prosecute those suspected of planning travel to a country to commit terrorist acts or receive terrorist training; of the 21 countries, only five had such laws.

Amid the spate of new laws, human rights groups warn of a possible backlash if governments go too far in muzzling dissent and in turn, send even more of their citizens into the arms of radical extremists. Efforts to stop fighters from rallying to the side of ISIS put the greatest scrutiny on countries like Turkey, whose long porous border has allowed thousands of militants to cross into Syria and Iraq. Turkey has openly supported some rebels who have sought to unseat Syria’s president, Bashar al-Assad, but lately it has faced the direct ire of the Islamic State.

Under stiff international pressure, Turkey has increased detentions, arrests, and prosecution of suspected foreign fighters, increased its information sharing with allied partners, and is taking steps to improve the security of its border, Western officials said.

“Turkey has turned a corner, having recognized the impact of this problem on its own society,” said Thomas Krajeski, a former United States ambassador to Yemen who last week completed a yearlong tour as the State Department’s senior adviser on foreign terrorist fighters.

Germany, Morocco and Tunisia have all passed new laws criminalizing support to terrorist groups, fighting or training in conflict areas, or recruitment for such acts. France has passed a new law since last year’s Council resolution that prevents French citizens and residents from leaving French territory if they are suspected of intending to join a terrorist group.

Perhaps most far-reaching, a new law requires Internet companies to provide the French government with metadata in real time, at the request of intelligence agencies, in suspected terrorist cases.

Still, France finds itself reeling. Its Prime Minister, Manuel Valls, told the French Parliament this month that 1,800 French citizens and residents are believed to be enlisted in jihadist networks worldwide. Among them close to 500 are still in Syria and Iraq, and 133 have died in combat.