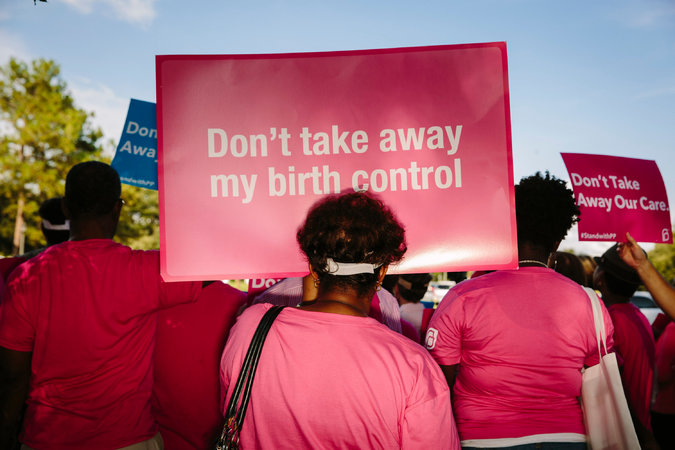 Supporters of Planned Parenthood at a rally in Baton Rouge, La., last month to protest a plan to defund the group. Several foes stood across the street.Credit Edmund D. Fountain for The New York Times

WASHINGTON — The undercover videos were made over more than two years, yet Planned Parenthood was taken by surprise when the first one was posted online in July. Now one of the biggest crises in the 99-year history of the organization, the nation’s largest provider of women’s reproductive health care, could reach a climax this week as conservatives want to shut down the government rather than help fund the group.

Dawn Laguens, Planned Parenthood’s executive vice president, recalled that after an aide alerted her to the initial video by the little-known Center for Medical Progress, an anti-abortion group, she thought: “This is not new” — Planned Parenthood had faced such tactics before — “but it’s a new low. And it is going to have reach.”

Immediately the organization was caught in a storm of internal confusion and defensiveness. There was disquiet among Democratic allies as Republicans, who control Congress and many state capitols, charged that the nonprofit organization was criminally “profiteering in baby parts.” A new video surfaced almost every Tuesday.

But Planned Parenthood has fought back and managed to put some opponents on the defensive after gathering information from its affiliates; hiring lawyers, crisis managers and video experts to document deceptive edits; and working to solidify support among donors, Democrats and, according to polls, a majority of Americans.

By Thursday, the Republican-controlled Senate could not even corral a majority to support a short-term bill to fund the government, but not Planned Parenthood, because several Republicans facing re-election had defected. And on Friday, Speaker John A. Boehnerannounced he would resign from the House before party conservatives could try to oust him from his post — the proximate cause being his unwillingness to lead a shutdown of the government over Planned Parenthood when the new fiscal year starts on Thursday.

Mr. Boehner would need Democrats’ votes to pass a government spending bill that President Obama would sign, leaving Planned Parenthood’s family planning and Medicaid payments untouched. That would have provoked a coup by conservatives, now a moot threat.

The Senate plans to pass such a bill by Wednesday, since Democrats have shown several times since July that they can block any measure that would defund Planned Parenthood. But because the bill would be short term, that would merely postpone a showdown with hard-line Republicans until December, when Congress must deal with a bill to increase the nation’s borrowing limit, another one that hard-liners hate.

While Republicans wrangle, Planned Parenthood at least publicly will be celebrating evidence that opponents have overreached — as in 2011 when, both parties agree, Republican shutdown threats backfired politically — and that support for it endures.

On Tuesday, the nonprofit group plans scores of Pink Out rallies nationwide. Supporters will travel by bus to Washington with a pro-Planned Parenthood petition bearing nearly two million signatures. Chapters in about 23 cities will offer free tests for sexually transmitted infections to underscore the services — also including contraceptives, cancer screening and routine exams mainly for low-income clients — that Planned Parenthood provides more commonly than abortions.

About half of its nearly 700 clinics do not perform abortions, and federal law has long barred funding for most procedures. Only a few affiliates in three West Coast states have arrangements with researchers to provide tissue from aborted fetuses or, in Oregon, fetal placentas. As doctors captured in the videos describe, fees of $30 to $100 a specimen cover costs rather than providing profits, which would be illegal.

Many Republicans say the videos prove that Planned Parenthood is harvesting and selling baby parts. Greg Mueller, who heads a conservative communications firm working with the videos’ producer, said even some supporters of abortion rights were “repulsed.”

“No amount of spending or spin is going to change that,” he said.

Mr. Mueller cited findings from focus groups that were moderated last week in Denver by Kellyanne Conway, a Republican pollster. But Ms. Conway, in an interview, did not dispute the accuracy of polls showing consistent support for Planned Parenthood and against defunding it.

Underlying Planned Parenthood’s show of confidence is concern that living under political threats is its new normal in a country that has become even more polarized in the wake of the videos. Coinciding with Pink Out parties on Tuesday, Planned Parenthood’s president, Cecile Richards, must testify before one of several congressional committees that are investigating the group.

“We may be at a political crossroads where the right has a resurgence,” said Ellen Chesler, a former Planned Parenthood board member and biographer of Margaret Sanger, founder of the birth-control movement.

“I think this is becoming more and more of a concern even though the public opinion is so strong” in Planned Parenthood’s favor, she added. “The politics is so totally unpredictable and unknowable.”

Certainly the politics were unpredictable when David Daleiden, a 26-year-old Californian, began releasing the videos he produced from recordings collected over 30 months of infiltrating clinics and tissue procurement companies. To gain trust, he formed a fake company called Biomax and the Center for Medical Progress, and participated in professional conferences.

“Everyone was taken aback to discover just how extensive the operation had been,” said Anita Dunn, a former White House communications director under Mr. Obama and a partner in SKDKnickerbocker, a consulting firm advising Planned Parenthood on managing the crisis.

Ms. Dunn said Planned Parenthood had three immediate challenges: to answer the attack, to simultaneously query 67 affiliates about which ones had tissue programs or contacts with the abortion opponents and to reassure supporters and political allies.

The group, which once enjoyed bipartisan support, has relied almost solely on Democrats since abortion opponents gained sway over the Republican Party in the Reagan era. Its heft with Democrats flows from its grass-roots support, and willingness to spend freely on advertising and get-out-the-vote efforts in key states.

Upon the initial video’s release, the national office contacted Democratic campaign committees and emailed an alert to affiliates. The chief executive of Planned Parenthood in Ohio, Stephanie Kight, quickly staged conference calls “to make sure that neither my board nor my staff hears about this when they pick up the paper” — a moot instinct in the social media age. “Within an hour or two, people are saying: ‘Steph, have you seen this? I just saw it on Facebook.’ ”

“National is on it,” she assured them. “We need time to figure it out.”

Former Gov. Ted Strickland of Ohio, a Democrat campaigning to unseat Senator Rob Portman, a Republican, heard an initial news report about the video and, he said, “How credible is it?” It’s not, officials were already telling his aides, even as they sought information themselves.

But perhaps those caught most off guard were employees in several Western states who recognized the couple who had secretly filmed the videos as the purported biotechnology representatives asking to buy fetal tissue during earlier visits to their facilities. In Colorado, Planned Parenthood officials warned aides to Senator Michael Bennet, a supportive Democrat facing re-election, that a Denver clinic might be featured in a coming video. It was, two weeks later.

Within two days, Planned Parenthood posted its own video: Ms. Richards denied that it had profited from tissue sales and apologized for the uncompassionate tone of a doctor in the initial video — addressing complaints among supporters.

By late July, Ms. Richards had begun a media offensive. Planned Parenthood and allied groups sought to discredit Mr. Daleiden for deceptive edits, possible tax violations and links to other “extremists.” But officials resisted divulging how many and which affiliates had tissue programs, even as their opponents implied that all clinics did. In fact, few do.

“You never want to give the wrong number,” Ms. Laguens said.

The number is low partly because Planned Parenthood’s affiliates, especially in more conservative states, do not want to invite controversy. Yet a 1993 federal law allows fetal tissue for research, and supporters included two current Republican leaders: the Senate majority leader, Mitch McConnell of Kentucky, and Representative Fred Upton of Michigan, the chairman of a committee investigating Planned Parenthood.

Most Democrats, many initially quiet, now are openly supportive. Mr. Strickland, the Ohio Senate candidate, stopped at Planned Parenthood’s office on a visit to Washington. “I was sort of saying to them, ‘I’m behind you and what you do,’ ” he said.

In New Hampshire, Senator Jeanne Shaheen, a Democrat, participated in an event with a local chapter, while Senator Kelly Ayotte, a Republican who is facing re-election and who has voted to defund Planned Parenthood, released a video praising women’s health programs — a sign of defensiveness, Democrats said.

And in Colorado, an adviser to Mr. Bennet, Craig Hughes, expressed no qualms: Planned Parenthood remains popular despite regular attacks because it is “so trusted as a provider of health care here.”

Ms. Laguens said, “We’re on the verge of our centennial, and we plan to be here for another 100 years.”