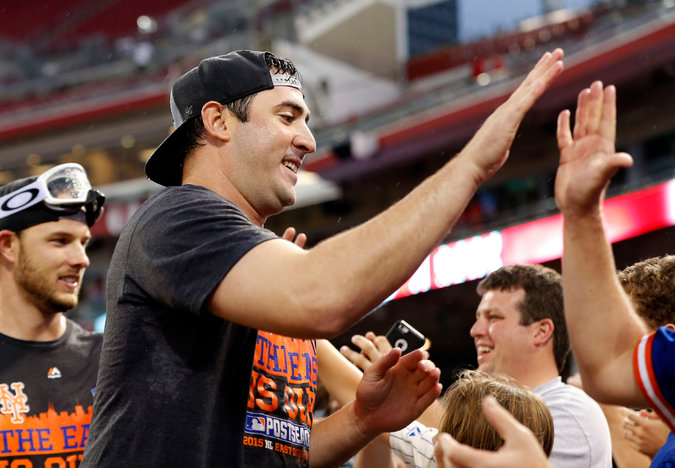 CINCINNATI — Once the Mets had clinched their first playoff berth since 2006, once Jeurys Familia struck out Jay Bruce to end the game, they hardly reacted at first, as if they couldn’t believe it had actually happened. Familia walked toward home slowly and wrapped his catcher, Travis d’Arnaud, in a hug, and the rest of the team converged on them.

After a nine-year wait, the last eight innings had dragged on for what felt like forever. Lucas Duda had crushed a grand slam in the first inning and removed all drama and tension from the game. The Mets could relax even more once they saw Matt Harvey push past his innings limit to throw a gem. Then the Mets simply had to wait the Reds out, to finish off a 10-2 win and clinch the National League East title over the Washington Nationals.

Back at Citi Field, a pennant-shaped sign will soon be erected down the left-field line to commemorate this team, alongside the other seven Mets teams that have made the playoffs.

The Mets do not have these types of celebrations, or these types of teams, very often. Depending how the rest of the season goes, the 2015 Mets will at least be remembered for giving a dormant franchise hope again. Since their last playoff berth, the Mets had endured two late-season collapses, six consecutive losing seasons, one slow rebuild, a Ponzi scheme that entangled their principal owner, Fred Wilpon, questions about their financial health, and calls from disgruntled fans for new ownership, new management, new coaches and new players. 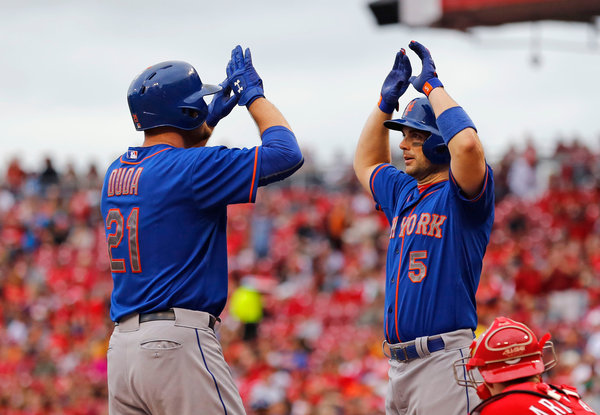 The Mets’ Lucas Duda, after hitting a grand slam in the first, was greeted by David Wright. In the ninth, Wright hit a three-run homer to help seal the win as the Mets captured the N.L. East title.Credit Aaron Doster/Associated Press

After the grand slam, David Wright, the team captain and the longest-tenured Met, stood near home plate clapping and was the first person to greet Duda as he scored. Out of action for about four months as he rehabilitated the spinal stenosis in his back, Wright had rejoined the Mets in time to help them make their final push.

Curtis Granderson and Michael Cuddyer, two veterans the Mets had signed in recent years to help change the culture of the franchise, provided insurance runs. Granderson hit a solo home run in the second, and Cuddyer added a two-run double in the third.

That gave Harvey plenty of room to work. Lately his season, his first back from Tommy John surgery, had been overshadowed by debates over how the Mets were handling him, his innings limit and whether he would be shut down early. Mets fans had vilified him for appearing to put his health ahead of the team’s goals, especially after he was pulled from his last start after only five innings, and the Mets went on to lose to the Yankees.

But when the Mets needed Harvey on Saturday, his competitiveness kicked in. He pitched six and two-thirds strong innings and threw 97 pitches, apparently without restrictions. They were not easy innings, either. The Reds collected nine hits off him, but he recorded six strikeouts and held them to just two runs, and the Mets fans here chanted his name as he left the mound.

The division title was the culmination of two months of inspired baseball that began in late July. Although their offense was ravaged by injuries, the Mets were still hanging around the Nationals, a trendy preseason pick to make the World Series, when the Mets’ front office made a series of moves that turned their season around.

They promoted the promising outfield prospect Michael Conforto, and at the nonwaiver trade deadline, they acquired four veterans with playoff experience — Yoenis Cespedes, Kelly Johnson, Juan Uribe and Tyler Clippard — to bolster their offense, reinforce the bullpen and lengthen their bench. Combined with the Mets’ stellar starting pitching, the additions gave them legitimacy as they pursued the division title.

The night of the trade deadline, Wilmer Flores hit a game-ending home run against the Nationals, two days after he cried on the field thinking he had been dealt to the Milwaukee Brewers. Perhaps inadvertently, he had given the Mets their galvanizing moment, and they went on to sweep the Nationals that weekend at Citi Field to pull into a tie.

“After that, you go into each game and you feel like, no matter what, you should win, can win, and will win,” Cuddyer said. “You go into every game and expect to win.”

The Mets won 20 games in August, their first 20-win month since 2000, the last year they made the World Series, to take command of the division. By the second week of September, they delivered another knockout blow, sweeping the Nationals again, this time on the road.

On the cusp of clinching a playoff berth on Saturday, the Mets looked loose. Before the game, they playfully shouted at a college football game on television in the clubhouse. Then came the masterly performance from Harvey, and a deluge of runs, and they couldn’t help smiling.

In the top of the ninth, with the outcome all but certain, Wright clubbed a three-run homer to center field. Showing no lingering effects from his back injury, he skipped toward the dugout, high-fiving his teammates. It was as if he wanted to savor the moment. He had waited long enough for it