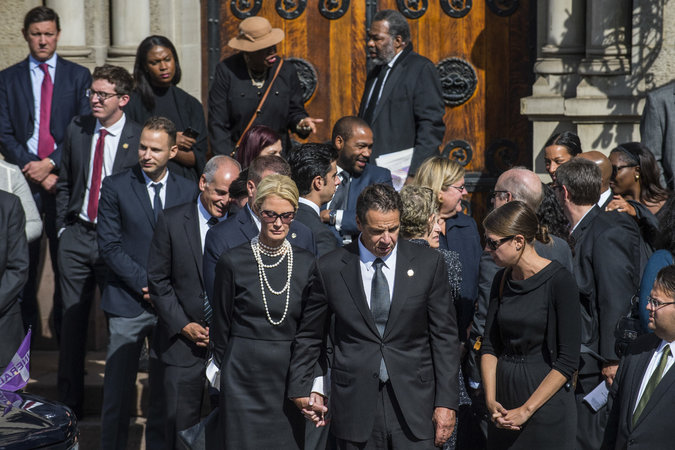 Gov. Andrew M. Cuomo, center, and his companion, Sandra Lee, leaving the funeral for Carey W. Gabay in the Clinton Hill section of Brooklyn on Saturday.Credit Robert Stolarik for The New York Times

Gov. Andrew M. Cuomo, during a fiery eulogy on Saturday for a lawyer in his administration who died after being shot in the head, implored New Yorkers to carry on the slain man’s mission by reforming schools, fixing public housing and, above all, demanding stronger federal gun laws.

Mr. Cuomo’s remarks came in a 17-minute address delivered at the funeral of the lawyer, Carey W. Gabay, 43, who was apparently caught in a shootout between rival gangs during a pre-dawn celebration that was a precursor to the annual West Indian American Day parade in Brooklyn. The service was an opportunity to reflect on the more private gifts of a man whose rise from a public-housing project in the Bronx to Harvard has been cast as the embodiment of the American dream. Mourners outside the service, at the Emmanuel Baptist Church in the Clinton Hill section of Brooklyn, said the proceedings, while somber, celebrated a man who gave to friends as if they were family.

For his part, Mr. Cuomo described Mr. Gabay’s public service as a reminder of what government can do for marginalized people, and said his death should serve as a call to stop the spread of gun violence in New York City. 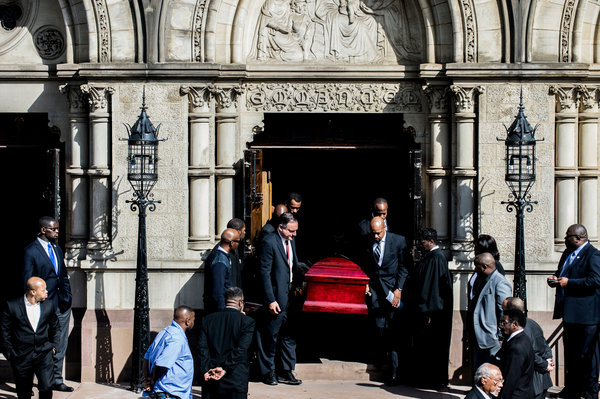 “The violence has become so brutal, so aimless, that the most innocent can be struck down anytime, anywhere,” Mr. Cuomo said in the eulogy, invoking mass killings in Newtown, Conn. and Charleston, S.C., alongside the seven people killed in shootings in the city last weekend. “Maybe there’s nothing you can do about it,” he added. “If only that were true — it’s not.”

As an assistant counsel to Mr. Cuomo, and, more recently, first deputy counsel for the state’s main economic development agency, Mr. Gabay pushed an “action agenda” touching on issues as wide-ranging as affordable housing and anti-discrimination efforts, the governor said.

That mission seemed to dovetail with Mr. Cuomo’s own, and the governor offered a spirited appeal for competent, common sense governance.

He said Mr. Gabay wanted better public housing, and a public education system that did not settle for “second-rate equipment and second-rate standards or politicians who protected the bureaucracy at the expense of the students.”

The governor also said Mr. Gabay was committed to “a society that has more compassion and a government that has more competence than to allow homeless people to sleep on the street and children to sleep in the squalor of shelters.”

The governor later walked out of the church with Mr. Gabay’s widow, Trenelle, on his arm. She received hugs from dozens of mourners, including Kenneth P. Thompson, the Brooklyn district attorney, and the Rev. Herbert Daughtry, a civil rights advocate. Mayor Bill de Blasio, who was also at the service, left quickly and did not speak to reporters.

Gospel music spilled out of the church’s arched doorways as seven pallbearers carried Mr. Gabay’s wooden coffin outside and placed it inside a cobalt-colored hearse along with bouquets of red roses. One of the pallbearers was Mr. Gabay’s brother, who afterward stood with his right hand on the hearse, his head bowed and his body heaving with sobs. 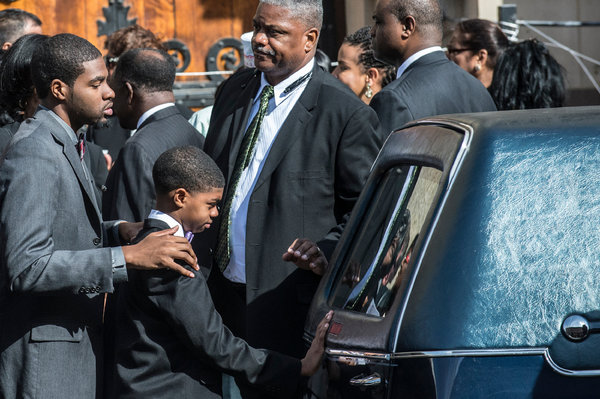 He, his two sisters and their mother all spoke at the service, which was closed to the public. Rowan Marques, 43, a fire department lieutenant in Miami who had befriended Mr. Gabay in Brooklyn, said, “He was one of the friendliest people you would ever want to meet.”

During the four years Mr. Gabay worked for the state, Mr. Cuomo said, he showed how “intelligent government action is a vehicle for justice.” He credited Mr. Gabay with drafting a 2011 measure that raised the rent and income thresholds at which landlords were allowed to deregulate apartments, a move that fell short of what tenant advocates hoped for but added protections for renters. Mr. Gabay also worked to promote opportunities for women- and minority-owned businesses.

At the end of his eulogy, the governor said he had not gotten to ask Pope Francis during his visit to New York why God took such an innocent man as Mr. Gabay, but heard the pontiff “repeatedly speak about a young man who grew up in poverty and raised himself up and lived a life of love and selflessness,” only to be violently killed. Jesus “sent a message that touched and inspired many,” Mr. Cuomo said, without mentioning his name, and he added that Mr. Gabay had a great impact, too.

But the governor was focused on gun control, criticizing politicians in comments outside the church for being too afraid of losing votes to pass stricter laws, a risk he said he took by signing a gun control package in 2013. He also said Democrats in Congress needed a stronger answer to Republican obstinacy.

No one has been arrested in Mr. Gabay’s killing.

Pasha Durr, 43, who befriended Mr. Gabay a decade ago in their Brooklyn neighborhood, said that considering Mr. Gabay’s character, and the circumstances of his death, he would have wanted something good to come from the tragedy.

“He was selfless, genuine, Carey was the real deal,” Mr. Durr said, recalling especially “his willingness to turn around and make others happy.”