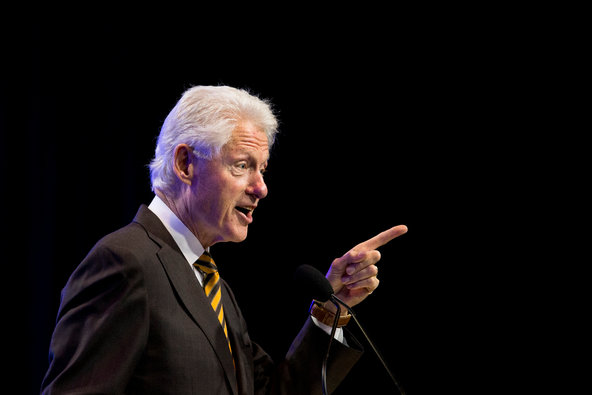 Bill Clinton at an event in July.Credit Matt Rourke/Associated Press

Former President Bill Clinton blamed Republicans who hope to undercut his wife’s presidential chances and a voracious political news media uninterested in substance for the furor surrounding Hillary Rodham Clinton’s use of a private email account and server while she was secretary of state.

“I have never seen so much expended on so little,” Mr. Clinton said in a taped interview with Fareed Zakaria that is scheduled to be shown Sunday on CNN. The network released excerpts on Saturday afternoon.

“She said she was sorry that her personal email caused all this confusion,” Mr. Clinton said. “And she’d like to give the election back to the American people. I think it will be all right. But it’s obvious what happened.”

Mr. Clinton likened the current inquiries into Mrs. Clinton’s emails to scandals as far back as the Whitewater land deal that plagued his 1992 campaign and his administration.

“This is just something that has been a regular feature of all of our presidential campaigns, except in 2008 for unique reasons,” Mr. Clinton said, without elaborating on why he believed that President Obama had not faced similar Republican-led efforts to derail his candidacy.

“It always happens,” he added. “We’re seeing history repeat itself.”

“The other party doesn’t want to run against her. And if they do, they’d like her as mangled up as possible,” Mr. Clinton said. “And they know that if they leak things and say things, that that is catnip to the people who get bored talking about what’s your position on student loan relief or dealing with the shortage of mental health care, or what to do with the epidemic of prescription drugs and heroin out in America.”

Mr. Clinton also faulted the political press corps, which he said was determined to see a competitive contest. At the beginning of the year, he said, Mrs. Clinton “was the most admired person in public life.”

“What happened?” he added. “The presidential campaign happened. And the nature of the coverage shifted from issue-based to political.”

“You can’t complain,” he said. “This is not — this is a contact sport. They’re not giving the job away. And people who want a race wanted her to drop some, and the people in the other party desperately wanted it because she’s already put out more positions on more issues and said how she would pay for it than, I think, than all the others combined, based on the two — the Republicans, based on the two debates I saw.”

Mr. Clinton, who has kept a relatively low profile in Mrs. Clinton’s presidential campaign, taped the interview on Thursday in New York in advance of the United Nations General Assembly and the annual Clinton Global Initiative conference.

On Friday, newly discovered emails raised questions about whether Mrs. Clinton had accurately described when she began using the personal email account that she relied on during her tenure at the State Department. (On Sunday, in an interview with “Meet the Press” on NBC, Mrs. Clinton will probably face more questions on the matter.)

Even though the email issue has overshadowed her presidential campaign, Mrs. Clinton, who says she broke no rules or laws, has occasionally made light of the controversy. Mr. Clinton had been among those who initially believed that Mrs. Clinton did not need to apologize for using private email, a practice that was allowed at the time and which he said her political rivals were trying to scandalize.

But Mrs. Clinton has since apologized, and she has repeatedly said she will be as transparent as possible in releasing her emails to the State Department.

Mrs. Clinton’s more contrite approach comes as her favorability and trustworthiness ratings in some polls have fallen in recent months and as Senator Bernie Sanders, her leading opponent for the Democratic nomination, has surged ahead in some polls in Iowa and New Hampshire.

In the CNN interview, Mr. Clinton conjured up a decades-old history of political nefariousness. “Ever since Watergate, something like this happens,” Mr. Clinton said. “And so I’d rather it happen now than later.”

To underscore the partisan nature of the scandal that engulfed his first campaign, Mr. Clinton said Whitewater began only after he received a call from an aide to President George Bush warning him not to challenge the sitting president. “He said, ‘We’ve looked at the field; you are the only one that can win,” Mr. Clinton said. “ ‘The press has to have someone every election. We’re going to give them you. You’d better not run.’ ”

But when Mr. Zakaria asked if the questions about Mrs. Clinton’s emails were a “Republican plot,” Mr. Clinton resisted the term.

“No, I’m not going there, because that’s what the — it’s not a — a plot makes it sound like it’s a secret,” he said. “I think that — that there are lots of people who wanted there to be a race for different reasons. And they thought the only way they could make it a race was a full-scale frontal assault on her. And so this email thing became the biggest story in the world.”