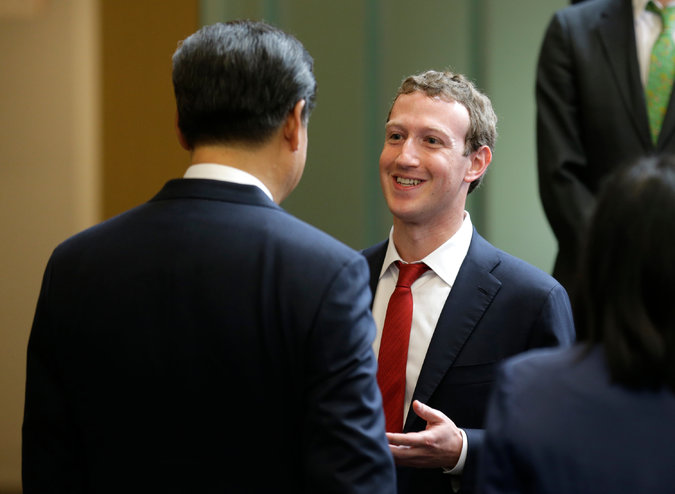 UNITED NATIONS — Mark Zuckerberg, chief executive of Facebook, promoted access to the Internet as “an enabler of human rights” and a “force for peace” on Saturday, as he announced that his company would help the United Nations bring Internet connections to refugee camps.

“It’s not all altruism,” Mr. Zuckerberg said later, in an implicit acknowledgment that drawing new users to his service is also good for Facebook’s bottom line. “We all benefit when we are more connected.”

Where and how Facebook would work with refugee camps, he did not say.

Mr. Zuckerberg’s remarks came at a lunch hosted by the United Nations Private Sector Forum at the world body’s headquarters. It was attended by government leaders and business executives and was intended to encourage private-sector cooperation to advance the ambitious global development goals adopted Friday in the General Assembly.

One of the speakers was Angela Merkel, the chancellor of Germany, who has taken a keen interest in advancing the Sustainable Development Goals. On Saturday, she made a strong pitch to business leaders to do their part, reminding them that curbing corruption, which is one of the goals, would make their lives easier, too. Poverty has already been cut in half in the past 15 years, she said. “The glass is half full,” she added. “The last mile is always the most difficult.”

Mr. Zuckerberg sat next to Ms. Merkel. His company has faced a rash of legal trouble across Europe, including in Germany, over privacy concerns.

The connectivity ambitions are at the center of Mr. Zuckerberg’s advocacy effort, Internet.org, whose goal is to offer Internet access to about four billion people in the world who cannot afford smartphones or do not live near fiber-optic cable lines or cell towers. Internet.org teamed up with phone carriers to offer free access to Facebook and other websites in developing countries like India, but critics said it would restrict what people could access in what critics called Facebook’s “walled garden.”

In April, 65 organizations from around the world sent an open letter to Mr. Zuckerberg complaining that the project violated the principles of net neutrality in the guise of “access for impoverished people.”

In the courtyard of the General Assembly building this past week, Facebook displayed pieces of the mammoth drone that it is building to beam Wi-Fi connections to places that have none. The drone is as big as a Boeing 737 and is solar-powered. It has yet to be launched, and it is one of several efforts underway by technology companies to spread the Internet to unconnected parts of the world. Google is trying something of its own, a network of high-altitude balloons.

Mr. Zuckerberg’s remarks coincided with a petition that he began with the entertainer Bono, the philanthropist Mo Ibrahim and others to expand connectivity, calling Internet access “essential” to achieving the development goals but skirting thorny issues like net neutrality and Internet censorship. The petition describes the Internet as “an enabler of human rights.”

Nearby, Obama administration officials sponsored an event to demonstrate anti-censorship tools, built with financial help from the government, for dissidents in repressive countries.

“The openness of the global Internet is challenged today like never before,” Tom Malinowski, the assistant secretary of state for democracy, human rights and labor, said, calling the countermeasures that companies and groups were developing “a foretaste of our response.”