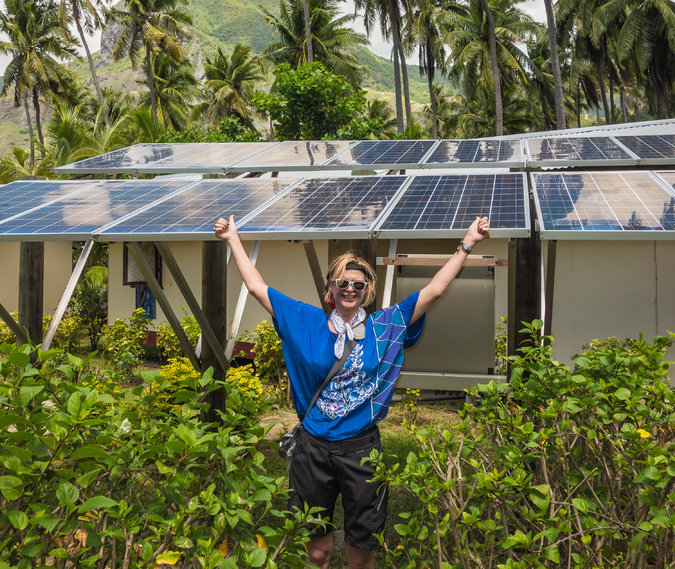 When Microsoft business unit managers calculate their profits or losses each quarter, they consider more than just sales and expenses. They also factor in the price of carbon.

Even more radically, the business units are charged an internal tax by Microsoft based on their energy usage. The money goes into a common fund that invests in environmental sustainability projects.

The company’s program is at the forefront of a fast-growing effort called carbon pricing. This year, 437 companies are calculating an internal price on carbon, up sharply from 150 last year, according to a new report by CDP, a nonprofit group that monitors carbon disclosures for companies.

Motivated by a mixture of moral conviction, hard-nosed economic forecasting and expectation of tougher regulations down the road, companies are scrambling to understand just how much energy they use. Like Microsoft, some, including Disney and Shell, are voluntarily charging themselves, and using that money to build solar panels and wind farms.

“Businesses do what’s in the interest of business,” said Paula DiPerna, a special adviser to CDP who worked on the report. “If this many companies are pricing carbon internally, they know that climate change is a business risk.”

Microsoft has gone further than most. In just three years, the company has reduced its emissions by the equivalent of 7.5 million metric tons of carbon dioxide and saved more than $10 million through reduced energy consumption. This year, Microsoft expects to charge its business units about $20 million for their emissions.

By taking money directly away from the bottom line, the program has grabbed the attention of the entire company, said Tamara DiCaprio, senior director of environmental sustainability at Microsoft and the architect of its carbon fee program.

“When we started talking about carbon emissions not in metric tons, but in terms of dollar amount, the business people could understand it,” Ms. DiCaprio said. “We’re all speaking the same language now: What is the cost to my group?”

Here’s how it works: Ms. DiCaprio and her team learn the amount of energy that each business unit will consume in a quarter, whether from office space, data centers or business air travel. Those kilowatt-hours and gallons of fuel are then converted into metric tons of carbon.

Finally, the cost of those investments is calculated — $20 million this year — and Ms. DiCaprio and her team then tell each business unit how much it owes, depending on how much energy it used. The money is collected and put into a fund that pays for a range of sustainability projects.

At its big office in Bogotá, Colombia, Microsoft installed more efficient lighting with money from the fund. In Santiago, Chile, the sales office got new building-management software to improve heating, ventilation and air-conditioning. And at company headquarters in Redmond, Wash., Microsoft used big data and a blanket of new building sensors to optimize energy usage across 125 buildings, leading to big cost and carbon savings.

The carbon fee is already changing behavior at Microsoft. Because business units are charged on the basis of their energy usage, they have a real incentive to reduce their energy consumption. Over all, Microsoft is using more power from renewable sources.

Not all of these companies are imposing internal taxes and investing in clean energy. Some are simply using carbon pricing as an academic exercise to anticipate future costs if more regulators impose actual taxes on carbon. So far only a few jurisdictions — including Ireland, Chile and the Canadian province of British Columbia — have done that. Others, including California, have instituted cap-and-trade systems aimed at limiting carbon emissions.

Although internal carbon taxing takes money from the bottom line, and thus from shareholders, some big investors support the efforts.

“Climate change is going to affect both risks and opportunities for our fund,” she said. “Carbon pricing is needed to make the market more efficient in capturing this particular risk.”

Ms. DiCaprio of Microsoft is especially qualified to grasp the financial risks and climate hazards of failing to reduce carbon emissions. An environmental science major at the University of California, Santa Barbara, Ms. DiCaprio became a commodities trader at Merrill Lynch in the 1990s. “I learned how markets work,” she said.

After a few years on Wall Street, Ms. DiCaprio moved to Seattle to take a job doing tech support at Microsoft. Over the years, her roles expanded to include sales, marketing and partnerships.

Then in 2010, after attending an environmental science reunion in Santa Barbara, Ms. DiCaprio returned to Microsoft energized by the prospect of helping the tech giant confront climate change. She began working with its sustainability team.

At the time, Microsoft had committed to reducing its emissions by 30 percent. But as the company moved toward providing cloud software services — which require energy-intensive data centers — Ms. DiCaprio and her colleagues resolved to be more ambitious.

In 2012, Microsoft said it would become 100 percent carbon-neutral. That year, Ms. DiCaprio — working with Ms. DiPerna at CDP and drawing on her markets experience on Wall Street — devised and introduced the carbon fee program.

Microsoft’s efforts remain modest in the grand scheme of things. But ahead of the United Nations Climate Change Conference in Paris this December, more companies are asking governments to act on climate change. This summer, six big European oil and gas companies called for governments to impose a tax on carbon emissions. And carbon pricing is, in effect, an effort by companies to regulate themselves when nations and states won’t.

“Companies are almost craving regulatory certainty,” Ms. DiPerna said. “They understand it’s in their business interest to address these risks. But governments have lost their oomph when it comes to climate change.”

“This year the level of investor engagement on this topic has turned a corner,” said Ms. Simpson of Calpers. “You now have trillions of dollars asking for this, rather than millions. And as with everything, money talks.”

An earlier version of this article misidentified the representative of the California Public Employees’ Retirement System who is quoted twice. She is Anne Simpson, director of corporate governance at Calpers, not Anne Stausboll, the chief executive.