Kim Davis, the county clerk in Kentucky who was jailed for refusing to issue marriage licenses to gay couples, said on Friday that she and her family have switched to the Republican Party.

By REUTERS on Publish Date September 25, 2015. Photo by Reuters. Watch in Times Video »

Kim Davis, the clerk of Rowan County, Ky., who was embraced by Christian conservatives because of her resistance to same-sex marriage, said Friday that she would shun her Democratic Party roots and become a Republican.

“She has come to the conclusion that the Democratic Party has left her,” Mathew D. Staver, a lawyer for Ms. Davis, said in a statement. “She has decided to switch her voter registration.”

Ms. Davis, whose choice became public hours before she was scheduled to appear at the Values Voter Summit, a conservative gathering in Washington, was elected last year as a Democrat. But amid the legal battle this summer that led to Ms. Davis being jailed for five nights for contempt of a federal court, many party leaders, including Gov. Steven L. Beshear, distanced themselves from her. Mr. Beshear, for example, rebuffed Ms. Davis’s requests that he call the Legislature into special session to consider amending Kentucky’s marriage laws.

Meanwhile, many Republican luminaries rushed to support Ms. Davis and to give voice to her argument that her religious liberties as an Apostolic Christian were being trampled by directives from the governor and the courts that she issue marriage licenses to same-sex couples. 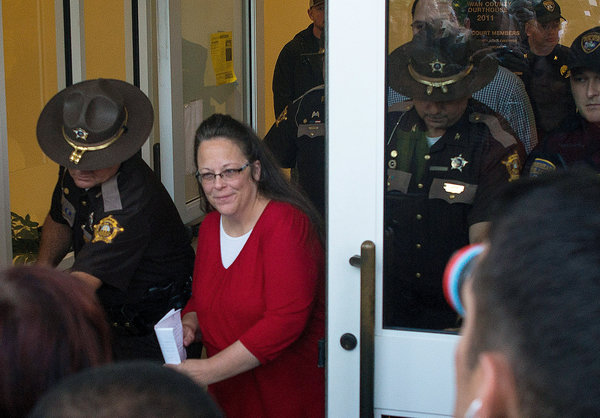 Kim Davis, the clerk for Rowan County in Kentucky, on her first day back to work after being released from jail earlier this month.Credit Ty Wright/Getty Images

On the day she was released from jail, two Republican presidential candidates, Senator Ted Cruz of Texas and former Gov. Mike Huckabee of Arkansas, met with her in Kentucky.

Although Democrats and Republicans alike had speculated about whether Ms. Davis would switch parties, Mr. Staver said Friday that “the issue of religious freedom in this case is not a partisan issue.”

“It is neither Republican nor Democrat,” he said. “It is an inalienable right and what makes America the land of liberty.”

Word of Ms. Davis’s choice came one day after her lawyers used a court filing to criticize Mr. Beshear and argue that Ms. Davis had become embroiled in litigation “in significant part” because the governor had “refused to take elementary steps to accommodate Davis’s undisputed, sincerely-held religious beliefs about marriage.”

Ms. Davis’s legal situation remains fluid, particularly after her announcement last week that any licenses issued by her employees would not carry her authorization.

She also ordered the paperwork for marriage licenses to be modified — for instance, licenses now say they are issued “Pursuant to Federal Court Order” — and questioned whether the altered documents were valid under Kentucky law. (Mr. Beshear has said they will be recognized in Kentucky.)

Judge David L. Bunning of Federal District Court, who this month ordered Ms. Davis jailed, has not said whether the modified licenses violate his order that she not interfere with the licensing process in Rowan County.

But the American Civil Liberties Union, which represented couples who sued Ms. Davis this summer, has said the changes created “an unconstitutional two-tier system of marriage licenses” and breached Judge Bunning’s instructions.

The judge, appointed to the bench by President George W. Bush, has said that public officials are not allowed to pick and choose which laws and court orders they obey.

“We expect at the end of the day for the court’s orders to be complied with,” Judge Bunning said at the hearing where she was ordered to jail. “That’s how things work here in America.”