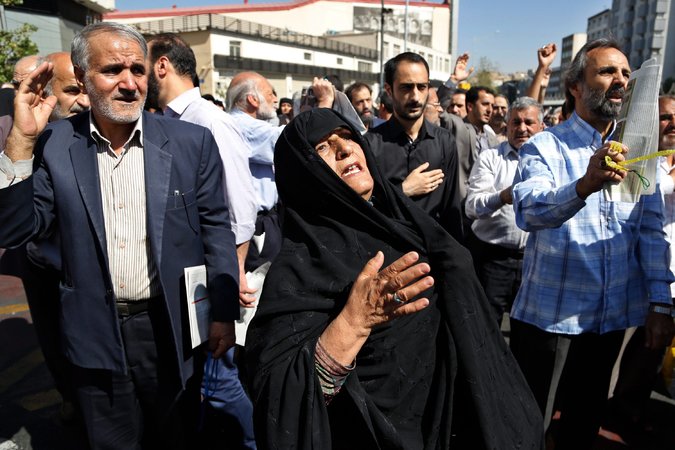 Protesters in Tehran on Friday condemned Saudi Arabia, Iran’s Sunni rival, for its handling of the hajj. Iran said 131 of its citizens died in the stampede there.Credit Abedin Taherkenareh/European Pressphoto Agency

BEIRUT, Lebanon — For the two million Muslims from across the world performing the hajj in Saudi Arabia this year, the annual pilgrimage is a time to forget the differences in race, sect, wealth and even nationality that divide believers and focus instead on their equality before God.

But when tragedy strikes, as with the massive human crush that killed more than 700 pilgrims near a holy site on Thursday, those differences come rushing back to the surface.

A Saudi official blamed the tragedy on African pilgrims, prompting accusations of racism. Iran fired up its state apparatus to lambast Saudi Arabia, its sectarian and regional rival, over its crowd management. And some questioned Saudi Arabia’s right to solely oversee sites of pre-eminent importance to the world’s nearly 1.6 billion Muslims.

The fact that such schisms can so swiftly cloud a mass rite meant to emphasize Muslim unity disappoints many who wish for greater international cooperation.

“Hajj is the great unifier,” said Khaled Almaeena, a Saudi writer and editor who has taken part in the rite many times. “But it is unfortunate that you can’t use the hajj for a greater good, because the concept of hajj in Islam is to get people together.”

Worldly divisions often intrude, even though all the pilgrims wear simple, white gowns meant to promote the sense of equality, and the theological rifts that divide Shiites, Sunnis and other sects are easily set aside in Mecca since all perform the same rituals.

“You could be an Arab prince, you could be a South Asian construction worker, you could be an Afghan warlord and you are all wearing the same clothes and you just walk through this barren landscape and it is miserably hot,” said Basharat Peer, an Indian journalist who has written about Mecca and the hajj.

“But when you look a little more carefully,” he added, “what you see is that even during the hajj, the distinctions of wealth and class do not disappear.”

Many have criticized the Saudi authorities’ development of the sites, replacing nearby mountains with luxury hotels where wealthy Muslims can pay huge sums for hotel rooms with a view of the Kaaba, the black structure in the middle of the Grand Mosque toward which Muslims pray.

Were you in Saudi Arabia for the Hajj?

By submitting to us, you are promising that the content is original, doesn’t plagiarize from anyone or infringe a copyright or trademark, doesn’t violate anybody’s rights and isn’t libelous or otherwise unlawful or misleading. You are agreeing that we can use your submission in all manner and media of The New York Times and that we shall have the right to authorize third parties to do so. And you agree to the rules of our Member Agreement, found online at our website.

Thank you for your submission.

That is a profoundly different pilgrimage from that of the many poor Muslims from Africa, Southeast Asia and elsewhere who sleep far from the holy sites and have little recourse from the often sweltering weather, Mr. Peer said.

The Saudi government said that 719 people were killed in the stampede, and many of the victims were from countries across Africa and Asia, highlighting the great diversity of the pilgrimage but also revealing the Muslim community’s fractures.

The highest confirmed death toll came from Iran, which said 131 of its citizens were killed. A Shiite-led state, Iran is locked in a fierce regional battle for influence with Sunni Saudi Arabia, and Tehran swiftly used the crisis to condemn the Saudi kingdom and to question its right to control the holy sites.

During Friday Prayer at Tehran University, one imam, Ayatollah Mahmoud Emami Kashani, dismissed Saudi allegations of disorderly behavior by the pilgrims as “absurd.” Addressing a crowd of thousands who chanted for the death of the Saudi royal family, he called for Saudi officials to be tried on charges of incompetence.

After the prayer, worshipers poured into the streets to demonstrate, urged by text messages from a cellphone company calling for “spontaneous protests.” Waving black flags, they shouted, “The Saudi regime is friends of Satan” and “The security of pilgrims is no longer guaranteed.”

Iranian allies across the Middle East carried the same tune. Former Prime Minister Nuri Kamal al-Maliki of Iraq said the episode was “proof of the incompetence of the organizers of the pilgrimage season.” In Lebanon, Hassan Nasrallah, the leader of Hezbollah, said the hajj tragedies reflected a “malfunction in the administration.” 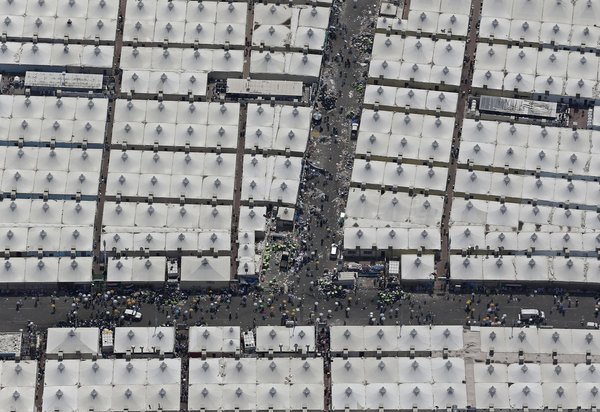 Tents for Muslim pilgrims in Mina, near Mecca, on Friday. Saudi Arabia’s control of the holy cities of Mecca and Medina is a relatively new development in Islam.Credit Ahmad Masood/Reuters

While Saudi officials appealed for all to await the results of an official inquiry, initial reports said that large groups of pilgrims had collided on streets that had few escapes, causing the human crush. Some said that security forces had temporarily blocked passageways, causing panic and aggravating the crowding.

The head of the central hajj committee, Prince Khaled al-Faisal, blamed the accident on “some pilgrims from African nationalities,” eliciting charges of racism from those who accuse Gulf Arabs of looking down on blacks. Other Saudi citizens cast the blame back at Iran.

Dr. Khalid al-Saud, a member of the royal family, wrote on Twitter that “the time has come to think — in a serious way — about banning ‘Iranians’ from coming to Mecca, for the safety of the pilgrims.”

Sabq, a prominent Saudi news site, published a report based on unnamed “eyewitnesses” claiming that the stampede was caused by Iranian pilgrims.

Officials in Pakistan said that eight of its citizens had been confirmed dead in the stampede and that 236 people were missing, although 86 of them were later found to be safe, The Associated Press reported.

While Pakistan has received much military and financial aid from Saudi Arabia, relations were strained this year after Pakistan refused to contribute troops to a Saudi-led offensive in Yemen.

Continue reading the main story Map How the Hajj Stampede Unfolded Maps showing where more than 700 people were killed in a stampede near Mecca, Saudi Arabia. 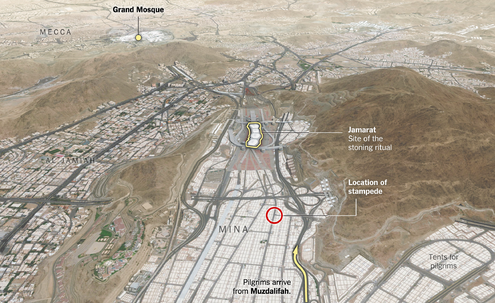 Saudi Arabia’s control of the pilgrimage and of the holy cities of Mecca and Medina is a relatively new development in Islam, so it was not without reason that officials from other predominantly Muslim countries called for oversight to be given to others. But the idea has not gained much traction.

“Our pain is so great,” wrote Ibrahim Melih Gokcek, the mayor of Ankara, on Twitter. Turkish authorities said that at least four Turks were among the dead.

“Let them deliver the problem to us; let us solve it,” Mr. Gokcek wrote online, apparently calling for a return to the arrangement of previous centuries when the pilgrimage was overseen by the Ottoman Empire. He later deleted his post.

Most pilgrims say that such political issues have no effect on how they experience the hajj, a once-in-a-lifetime duty for every able-bodied Muslim who can afford the trip and one of the five pillars of Islam.

For many, the hajj is a milestone reached only after years of saving, a fact that only increases the anger when Saudis get caught, say, doing their religious duties without bothering to get out of their S.U.V.s.

Mr. Almaeena, the Saudi writer and editor, said that the Saudi government had worked to make the hajj affordable to all by providing health care and other services as well as a train to carry pilgrims between Mecca and Medina. Still, he acknowledged that the hajj was easier for some pilgrims than for others.

“If there are people who want to have caviar in the morning they can, but for me the spirit of hajj goes away,” he said.

An earlier version of this article gave an outdated title for Nuri Kamal al-Maliki. He is a former prime minister of Iraq, no longer the current one.