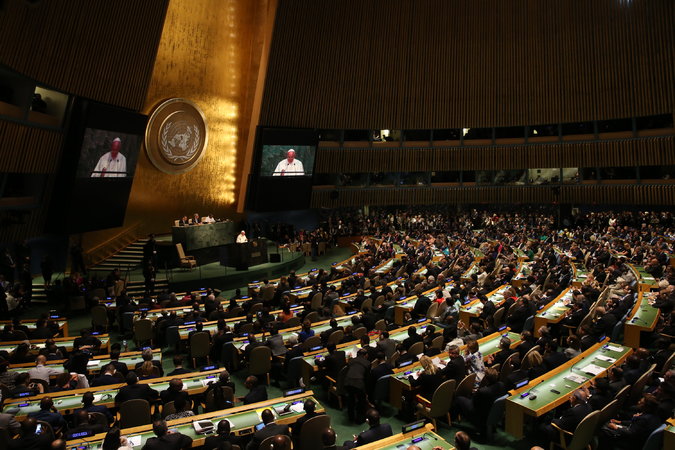 UNITED NATIONS — With a passionate call from Pope Francis to choose environmental justice over a “boundless thirst for power and material prosperity,” world leaders on Friday adopted an ambitious agenda to reset their own priorities, from ending hunger to protecting forests to ensuring quality education for all.

“We want to change our world, and we can,” Chancellor Angela Merkel of Germany told a packed General Assembly hall.

The global goals, which emerged after three years of negotiations, are 17 in all. Known as the Sustainable Development Goals, they are not legally binding, and therefore not enforceable. But they carry a moral force of coercion, because they are adopted by consensus by the 193 member states of the United Nations. They apply to all countries, not just poor ones, as was the objective of the last round of ambitions, called the Millennium Development Goals, which expired this year.

“The new agenda is a promise by leaders to all people everywhere,” the secretary general, Ban Ki-moon, told the General Assembly. 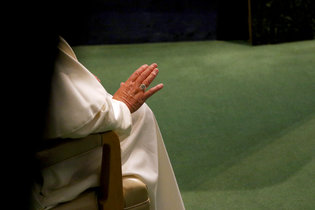 Central to the new set of global goals, which extend to 2030, is the idea of caring for the planet and for the world’s poorest citizens, which was also at the heart of the pope’s address — his first at the United Nations.

“Any harm done to the environment, therefore, is harm done to humanity,” Francis said, later reprising his argument that the poor are the biggest victims of environmental destruction.

“A selfish and boundless thirst for power and material prosperity leads both to the misuse of available natural resources and to the exclusion of the weak and the disadvantaged,” he said.

The poor, Francis said, are “cast off by society, forced to live off what is discarded and suffer unjustly from the consequences of abuse of the environment. These phenomena are part of today’s widespread and quietly growing ‘culture of waste.’ ”

The summit meeting at the General Assembly for the adoption of the Sustainable Development Goals is something of a prelude to the Paris conference later this year, where countries are trying to come up with a global compact to cut their carbon emissions and to help the most vulnerable countries deal with the ravages of climate change.

China promised a cap-and-trade policy in 2017. South Africa announced its climate plan on Friday, Indonesia announced its commitments on Thursday, and Brazil was due to reveal its plan on Sunday. The United States, European Union and other big polluters have already said how they plan to cut emissions, leaving India as the major holdout.

On Friday, Narendra Modi, India’s prime minister, said his country was already on its way to what he called “a sustainable path to prosperity,” enumerating in his speech a list of things that his administration had already announced: ramping up renewable energy, cleaning rivers and imposing a carbon tax. He made no announcements about India’s climate commitments, saving that for when he returns home. India has maintained that its main priority is to overcome poverty. “We have concrete initiatives and time frames,” Mr. Modi said, signaling to his domestic audience that India was not going to bend to outside influence.

Mr. Ban, who met with Mr. Modi, gently nudged him on committing to emissions cuts, a statement by Mr. Ban’s office suggested. “He underlined the tremendous importance of India’s role in renewable energy, and encouraged the prime minister to continue to show strong global leadership on this issue,” Mr. Ban’s statement read.

The pope, who was the inaugural speaker of the day, was frequently interrupted by applause for his remarks, which included a full-throated endorsement of education for girls. In the balcony of the General Assembly hall, Malala Yousafzai, the Pakistani girl and Nobel Peace Prize laureate who was shot in the head by the Taliban, was among those who clapped.

Francis praised world powers for reaching an agreement with Iran on its nuclear energy program. He also called for the elimination of nuclear weapons, at which Mohammad Javad Zarif, the foreign minister of Iran, sat up in his seat and applauded.

The pope did not dwell on the church’s notable difference with the global agenda: ensuring access to reproductive health and services. He spoke of “absolute respect for life in all its stages and dimensions.”

How governments will be held to account for their commitments to the goals remains unclear. 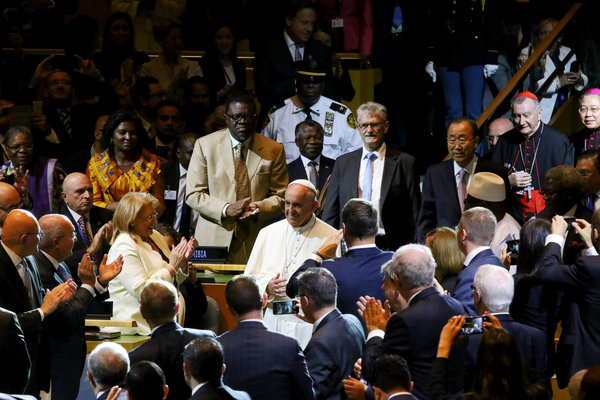 “The true test of commitment to Agenda 2030 will be implementation,” Mr. Ban told leaders. “We need action from everyone, everywhere.”

Salil Shetty, the secretary general for Amnesty International, speaking after Mr. Ban, said, “People should know exactly what governments have promised and what they have delivered — the right to information.”

He, too, scolded many of the powerful in the room, accusing them of hypocrisy.

“You cannot lecture about peace while being the world’s largest manufacturers of arms,” he said. “You cannot allow your corporations to use financial and tax loopholes while railing against corruption.”

Once the development summit meeting concludes on Sunday, many of the same presidents and prime ministers are to begin their annual debate in the General Assembly — and in the corridors, talk about war and peace.

The pope rebuked them, particularly “those charged with the conduct of international affairs,” for having failed to put an end to the many conflicts in the world, particularly in the Middle East.

“Real human beings take precedence over partisan interests, however legitimate the latter may be,” he said.

In what appeared to be a specific reference to the conflicts in Syria and Iraq, the pope said people “have faced the alternative either of fleeing or of paying for their adhesions to good and to peace by their own lives, or by enslavement.”

Ms. Merkel also referred to the refugees fleeing violence for Europe, and said peace was a “prerequisite” for development.

Francis also scolded global financial institutions, calling on them to ensure that countries “are not subjected to oppressive lending systems which, far from promoting progress, subject people to mechanisms which generate greater poverty, exclusion and dependence.”

The audience responded with loud applause.

The pope’s native Argentina — and, more recently, Greece — fought vigorously for a General Assembly resolution on a set of principles to resolve disputes between financially distressed countries and their lenders. The United States, Japan and Germany were among a handful of countries that voted against it. It passed, although it is not binding and has no real effect.