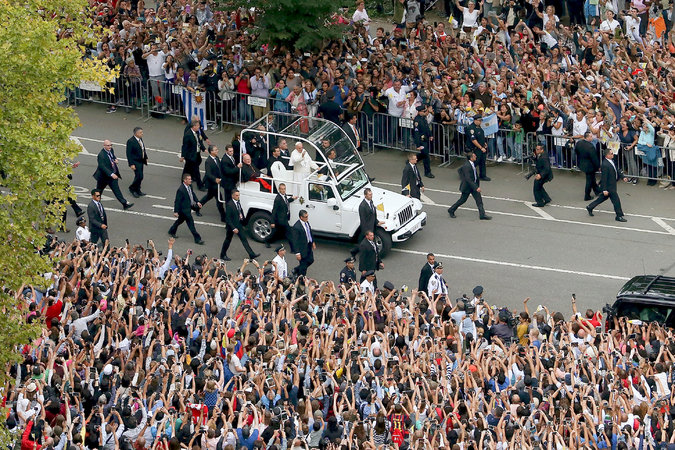 By motorcade and popemobile and simple shoe leather, in a daylong tour up and down Manhattan that found pockets of joy and pain, wealth and want, Pope Francis on Friday called for social justice and peace in addresses to world leaders and workaday New Yorkers alike. He ended with a stirring homily that was both an ode to the city and a reminder to watch for glimpses of the presence of God among the poorest of the poor.

“In big cities, beneath the roar of traffic, beneath the rapid pace of change, so many faces pass by unnoticed because they have no ‘right’ to be there, no right to be part of the city,” Francis said in a Mass before 20,000 at Madison Square Garden. “They are the foreigners, the children who go without schooling, those deprived of medical insurance, the homeless, the forgotten elderly. These people stand at the edges of our great avenues, in our streets, in deafening anonymity.”

That theme, that “God is living in our cities,” provided an apt conclusion to a day spent navigating New York’s complicated fabric of rich and struggling. It was the pope’s first visit to the city, where the longtime hum of the machines of commerce and prosperity has brought the very excesses he has spent his papacy pushing against. It was impossible to ignore, behind the rows and rows of well-wishers who packed Central Park’s broad meadow, the soaring columns of skyscrapers with penthouses that are home to many of the world’s wealthiest people.

He spoke of that divide often during the day, from his first remarks before the United Nations General Assembly, where he called for respect for “those considered disposable because they are only considered as part of a statistic,” to his closing homily’s observation that “big cities also conceal the faces of all those people who don’t appear to belong, or are second-class citizens.”

Francis sought out some of those faces on a day of grand pageantry and small gestures that brought him before the relatives of the fallen at the footprints of the twin towers and, hours later, the upturned smiles of East Harlem schoolchildren not yet born the day those buildings were destroyed.

Perhaps the day’s greatest spectacle was his winding sweep through a swath of Central Park, a logistical feat that included screening tens of thousands of ticketholders, one bag at a time. The throngs roared their greetings to the “people’s pope,” using the name by which he is commonly known: “Viva Papa!” 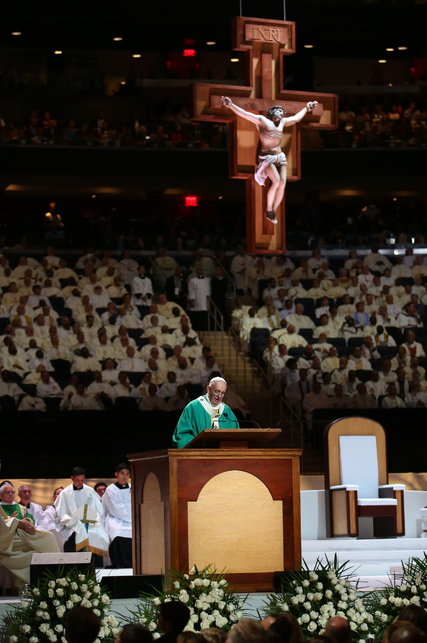 In spite of the tight ring of dark-suited security that surrounded the pope at all times, many were allowed a closer look. Among them: a New York police officer, Terrance McGhee, in a wheelchair at the World Trade Center site, whom Francis stooped to greet; dozens of children outside Our Lady Queen of Angels in East Harlem, who waved cellphones as Francis gave head-pats and high-fives; the day laborer at the Garden Mass, a medal under his shirt of St. Jude, the patron saint of lost causes; the babies held out for a blessing in the Garden.

Just after 8 on the crisp early autumn morning, Francis left his papal apartment on the Upper East Side for his address to the General Assembly, the fifth by a pope and the first for him. He called for environmental responsibility and lamented the impact of decades of abuse on the world’s poor.

“They are cast off by society, forced to live off what is discarded and suffer unjustly from the consequences of abuse of the environment,” Francis said. “These phenomena are part of today’s widespread and quietly growing ‘culture of waste.’ ”

From there, the layers of political commentary that followed his remarks in Washington earlier in the week seemed to fall away, leaving the day one of pure emotion for Francis and those wishing to be near him.

It was also a respite from nagging thoughts that society’s ills will remain after he has left New York, the middle leg of a United States visit that began in the capital and ends on Sunday.

From the United Nations, the pope’s motorcade sped downtown to the World Trade Center site. Upon arriving, he walked into the September 11 Memorial and Museum, flanked by Cardinal Timothy M. Dolan and others, slowly making his way past the bottom of the memorial’s North Pool to the top of the South Pool. 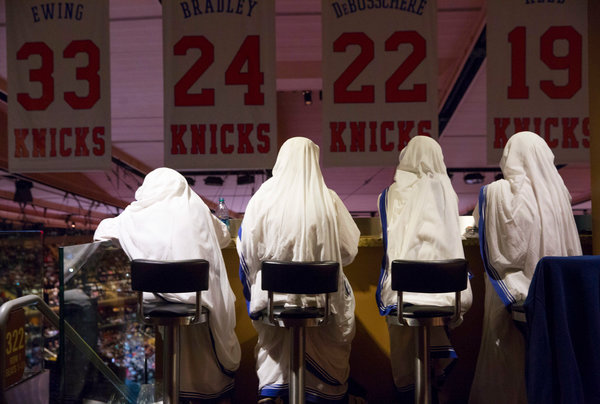 There, he paused for a long moment of silent reflection, gazing down into the pool of cascading water, which, from the visitor’s vantage point, has no visible bottom. He looked at the names of the victims on the panel at his fingertips, one of many panels at the site that, together, bear thousands of names: Boyle, Woods, Nguyen, Lynch. The falling water brought the only sound. He and Cardinal Dolan each left a white rose on the panel.

Francis turned at that point, meeting a long line of relatives who shared memories of those who had died on Sept. 11. He listened, often clutching an outstretched hand, and once patting a little girl’s head. He entered the museum and its Foundation Hall, where a multifaith ceremony of striking breadth — representatives of Judaism, Islam, Hinduism, Sikhism and Christianity — heard him eulogize those who died trying to rescue others.

“New York City firefighters walked into the crumbling towers, with no concern for their own well-being,” he said. “Many succumbed. Their sacrifice enabled great numbers to be saved.” He called the site “a place of saved lives, a hymn to the triumph of life over the prophets of destruction and death.” 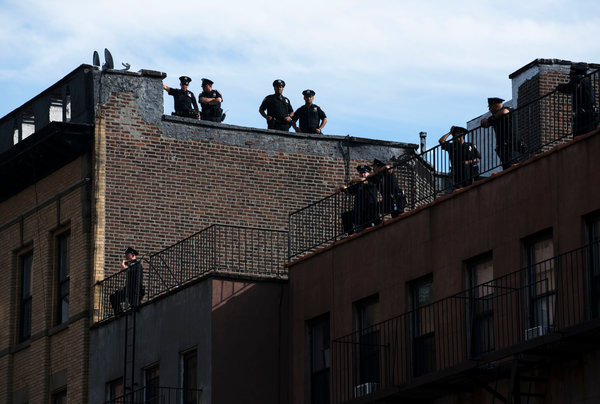 Police officers lined the rooftops at Second Avenue and 112th Street in Harlem.Credit Karsten Moran for The New York Times

And he called for peace. “Peace in our homes, our families, our schools and communities. Peace in all those places where war never seems to end. Peace for those faces which have known nothing but pain.”

The pope walked through the museum, past the relics and totems that have become indelible images from that day 14 years ago, like the hulking section of the trade center’s foundation wall, the “slurry wall,” and the “last column,” an icon covered with pictures and truck and unit numbers from the city’s firehouses and police precincts.

The pope’s motorcade then left the memorial. Crowds gathered along his route uptown to his apartment; a woman, tears streaming down her face, hoisted a baby on her shoulders. All day, enormous crowds lined sidewalks behind metal barriers and tall fences, straining for a glimpse of the figure in white.

Pope Francis spoke at a multi-faith prayer service at the National September 11 Memorial and Museum in lower Manhattan on Friday.

“I’m Jewish, and this is still the coolest moment of my life,” Julie Rodgers, 70, said.

The crowds swelled around Central Park during a break in the papal schedule. There was some jostling and name-calling among the hordes of ticketholders, but the police reported no major disturbances. Scores of people lined up along the sidewalks outside the park, filling block upon block. Some were eventually turned away, crying. Others fainted in the heat.

The afternoon’s first stop for Francis was Our Lady Queen of the Angels School on East 112th Street. The neighborhood was perhaps the day’s least polished backdrop, with its hair salons and “We Buy Gold” signs. (“I hope he brings some blessings to the block,” a local superintendent had said on Thursday.)

Inside a brightly colored classroom, he warmly greeted about two dozen children — “This is nice!” he said — and examined class projects — “This is a solar panel,” one boy explained — before evoking the Rev. Dr. Martin Luther King Jr.

“His dream was that many children, many people could have equal opportunities,” Francis said. He joked to the students that he was giving them homework: “Please don’t forget to pray for me.”

Then he met a group of immigrants, who gave him gifts — a soccer ball, a hard hat, a tool belt.

From there, he went to Central Park, where the crowds were still waiting, stepping into his popemobile to cruise about 12 blocks at a walker’s pace, beneath English elms and pin oaks, toward Columbus Circle. The journey lasted only about 15 minutes, but it exposed the pope to his largest crowd of the day by far.

The Mass at the Garden was celebrated with the choreography of a concert befitting the hall before a rapt audience.

“A hope which liberates us from the forces pushing us to isolation and lack of concern for the lives of others, for the life of our city,” Francis said. “A hope which frees us from empty connections, from abstract analyses or sensationalistic routines. A hope which is unafraid of involvement, which acts as a leaven wherever we happen to live and work. A hope which makes us see, even in the midst of smog, the presence of God as he continues to walk the streets of our city.”