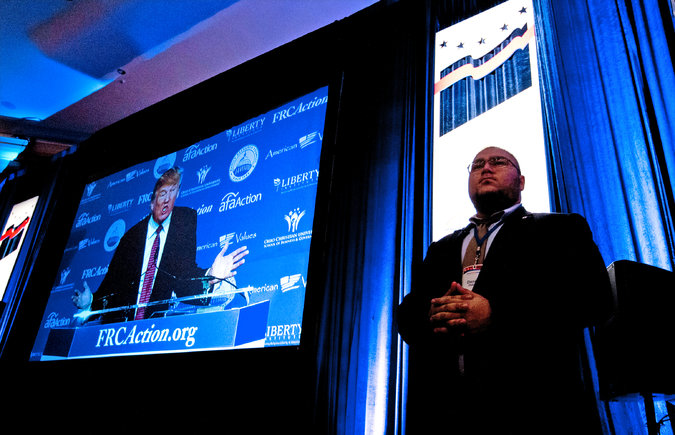 WASHINGTON — After training his fire for much of the summer on former Gov. Jeb Bush, Donald J. Trump has found a new favorite Republican rival to taunt: Senator Marco Rubio of Florida.

But Mr. Rubio is proving capable of giving it back. And Mr. Trump also discovered on Friday that some conservatives do not respond as kindly when the insults are directed toward Mr. Rubio, who is not viewed with the sort of suspicion that Mr. Bush engenders among hard-line activists.

“You have this clown, Marco Rubio,” Mr. Trump began, in a speech to the Family Research Council’s Values Voter Summit here. “And I’ve been so nice to him.”

Before he could go further, though, the audience of social conservatives let out a cascade of boos.

Mr. Trump had brought a Bible with him on stage, but he is not a natural fit for movement conservatives, particularly the born-again Christians who are involved in politics chiefly because of their faith and attend conferences such as this.

He quickly turned to a safer line of attack, recalling that Mr. Rubio had been a leader in the push to provide a pathway to citizenship for illegal immigrants before he abandoned that legislative effort. “If you believe in something, you have to be true to yourself,” said Mr. Trump, calling Mr. Rubio “really weak on immigration.”

He added: “All of a sudden, he went down in the polls and he starts changing his tone.”

Mr. Rubio, trying out one of Mr. Trump’s favorite tactics by mocking him with feigned pity, shot back later in the day that Mr. Trump “had a tough week.”

“I think one of the statements he made was in front of an empty room in South Carolina,” Mr. Rubio said on Fox News. “He had a really bad debate. Carly Fiorina really embarrassed him.”

The back-and-forth was the latest signal of Mr. Rubio’s growing prominence in the Republican race.

Overshadowed for much of the year, Mr. Rubio has begun to inch up in the polls after a pair of solid debate performances. And after months of avoiding the fray with Mr. Trump, Mr. Rubio waded into it earlier this month, saying his inability to answer questions on national security was “very concerning.”

“If you don’t know the answer to these questions, then you are not going to be able to serve as commander and chief,” he said on CNN, referring to a radio interview in which Mr. Trump was unable to talk with much specificity about foreign policy matters.

That criticism prompted a wave of insults from Mr. Trump, who appears to have either tired of mocking Mr. Bush or determined that he no longer poses him the greatest threat among the primary contenders.

Speaking in North Charleston, S.C., on Wednesday — in a room that, as Mr. Rubio noted later, had scores of empty seats — Mr. Trump, 69, belittled Mr. Rubio, 44, for running up personal credit card debt.

“He’s got no money,” said Mr. Trump, who calls himself a billionaire 10 times over, “zero.”

He also declared that he had a superior head of hair and ridiculed Mr. Rubio for heavily perspiring during the Republican debate on Sept. 16.

The next day, Mr. Rubio responded by engaging in a bit of amateur psychology on a popular Kentucky sports talk radio show.

“He had a really bad debate performance last week,” Mr. Rubio said. “He’s not well informed on the issues. He really never talks about issues and can’t have more than a 10-second sound bite on any key issue. I think he’s kind of been exposed a little bit over the last seven days and he’s a touchy and insecure guy. So that’s how he reacts and people can see through it.”

Such talk, which Mr. Rubio continued in an interview on Fox News, set the stage for Mr. Trump’s trash-talking of Mr. Rubio at the Values Voter Summit on Friday morning.

Beforehand, though, word of House Speaker John A. Boehner’s abrupt resignation reached Mr. Trump as he made his way down a hotel staircase. But he showed surprisingly little interest in what was a political bombshell.

“Well it’s a big decision that he made, it’s a great decision,” Mr. Trump said. “I think so. I think it’s good for everybody. I think it’s time, he’s been there a long time. But I think it’s time.” (After further questions, Mr. Trump grasped for an escape hatch: “What do you think?” he asked his interviewer. “You tell me.”)

Approaching the ballroom where he would give his speech, Mr. Trump was swarmed by reporters who also wanted to ask him about Mr. Boehner. He repeated his answer — “It’s time” — and kept walking.

But then a reporter asked him about Mr. Rubio. Mr. Trump stopped and turned to the cameras.

“He doesn’t show up to vote for one thing,” said Mr. Trump, uncorking his now-familiar attack on Mr. Rubio’s record of absenteeism from Senate votes.

Asked if he thought Mr. Rubio was a “threat,” Mr. Trump said he did not.