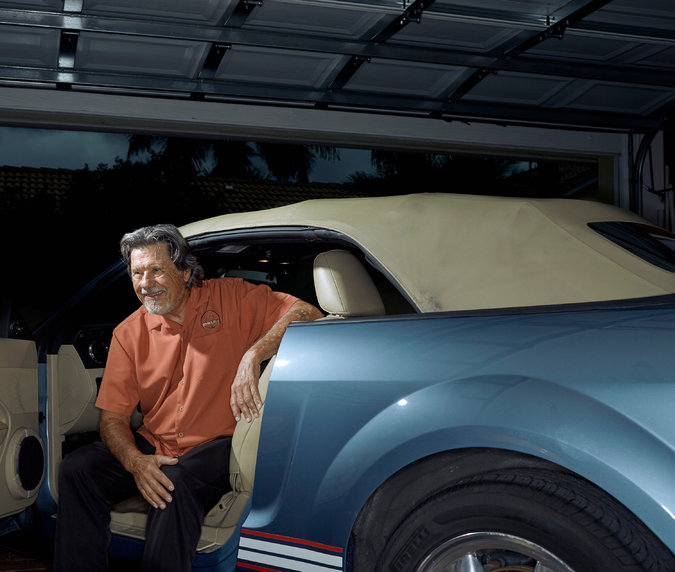 Robert Blunier rents out his Ford Mustang convertible through RelayRides, a peer-to-peer car rental service based in San Francisco.Credit Ryan Stone for The New York Times

WILLIAM DAUB, 63, sold laboratory instruments for several decades, with a salary in the low six figures and access to perks like a corporate jet. He retired in April last year, after he was laid off.

He began collecting Social Security and enrolled at a community college to earn computer certifications. Those in hand, he applied for entry-level jobs paying $25 to $30 an hour. Younger classmates were hired. He wasn’t. He chalked it up to age.

His wife earns a good income selling computer software. Still, with a mortgaged house in the New York suburbs, and a lifestyle that includes a housekeeper, dinners out and brief trips to nearby vacation spots, he was restless and looked for ways to augment his public pension and withdraw less from his 401(k).

By chance he read about TaskRabbit, one of a growing number of online platforms that match individuals to projects, services and living spaces. Along with Airbnb, Uber and others, it fits squarely into the emerging “gig economy.” Collaborativeconsumption.com, a website that carries news, events and opportunities related to the sharing economy, lists about 1,400 companies.

Before starting with TaskRabbit, Mr. Daub passed a background check and a training course. This summer, he began assembling Ikea furniture, a skill he learned as a homeowner. His published rate is $49 an hour, which includes a client services fee paid to the company. During July and August, working five or six hours a week, he estimated he earned about $2,000. “I’m making good money and making my own hours,” he said.

As the stock market seesaws and many retirees struggle to supplement inadequate savings and investments, more older Americans are turning to a variety of methods to earn extra money, keep in touch socially and find ways to enjoy experiences that might not be affordable otherwise.

A report released by PricewaterhouseCoopers in April estimated that 7 percent of Americans consider themselves providers in the so-called sharing economy. Of those over age 55, 25 percent do.

A separate PricewaterhouseCoopers report estimated that the sharing economy, which totaled about $15 billion in 2014, could grow to $335 billion by 2025.

“To participate in the sharing economy, one must have something to share,” Linda Barrington, executive director of the Institute for Compensation Studies in the Industrial and Labor Relations School at Cornell University, wrote in an email. “The assets that older people accumulated and used intensively when first purchased (a large home because they had children) come to have excess capacity over time (the children move out and the car is not needed for so many errands).”

Robert Blunier, 79, of Palm Beach County in Florida, knows that well. Until late 2013, he worked as the general manager at a high-rise condominium. After retiring with a small amount in savings and insurance, he looked to supplement his Social Security payments.

He ruled out positions like Walmart greeter and supermarket packer, which involves bagging and loading groceries. “It’s tough work,” he said. He considered representing roofing and painting contractors to help them pitch their services to condominium managers.

Instead he decided to rent his 2005 Mustang convertible through RelayRides, a peer-to-peer car rental service based in San Francisco. (The only state it is not available in is New York, where it stopped operating. State authorities said it was in violation of insurance laws.)

He charges $39 a day, which includes 200 free miles, and ferries those who rent his car to local airports, charging an additional $25 to $35 depending on distance. “I do enjoy driving back and forth to the airport and we part on friendly terms,” he said.

In the last year and a half, he said, he has rented out the car more than 50 times. At the airport, a convertible rental can run three times the price or more. An older Mercury Marquis that he owns for his everyday use is also available. In 2014, he estimates the car rentals netted about $6,000. This year, he is up $4,100. RelayRides takes 25 percent of the service provider’s revenue.

There’s also savings on vacation. In early September, he and his wife flew to Las Vegas for a tour of Utah’s national parks. Credits on his account allowed him to rent a 2009 Chrysler Sebring four-door sedan from a RelayRides provider at a modest price.

Mr. Blunier says running a car rental service has its drawbacks. “RelayRides does tie me down,” he said. “When the car is out, I can’t leave.”

By his choice, the service keeps him from spending more time at a vacation home in Murphy, N.C., that he bought in 2008. “I thought I’d be using it a lot more, “ he said. He rents that out, too, and estimates he has earned about $2,000 this year.

Dorian Mintzer, a retirement coach and co-author of “The Couple’s Retirement Puzzle: 10 Must-Have Conversations for Creating an Amazing New Life Together,” said participating in the gig economy could provide a sense of purpose. “It’s an opportunity for people who aren’t in the work force to earn some money, have social interaction and a reason to get out of bed in the morning,” she said.

Lisa D’Ambrosio, a research scientist at the M.I.T. AgeLab, sees other advantages. “It’s a transition to what you do next,” she said. “There’s money, but you don’t need to commit yourself. There’s a great deal of flexibility; you’re not accountable to anyone else about your schedule.”

Martha Williams, 61, retired three and a half years ago after a career as a landscape architect. Since late 2012, she has been a pet sitter from her condo in Playa del Rey, Calif., for DogVacay, a Santa Monica company that bills itself as an alternative to kennels. “I was ready for a change,” she said.

She limited the number of pets in her care, (she already owned two dogs) and although she did not tell the condominium association about her business, she complied with local regulations.

This year she raised the daily rate to $45 from $40. And while she followed DogVacay’s guidelines, which require contacting owners daily, at times she exceeded that. One couple touring Machu Picchu returned to their hotel to see photos of their pet.

“It’s a great comfort” to the owners, she said. She and several pet owners became friends on Facebook.

She estimated that she earned $12,000 from November 2012 to August 2015. The pet sitting ended last week. She and her husband are relocating to Florida, and Ms. Williams expects to take a year off from running the business.

Despite the advantages that many participants see, experts say providers face a number of risks. “This work is not part of the formal employment sector where labor laws protect workers,” Ms. Barrington of Cornell University noted.

Still, Mr. Daub, who also plans to start an information technology consulting practice, said the opportunity had worked out better than he expected.