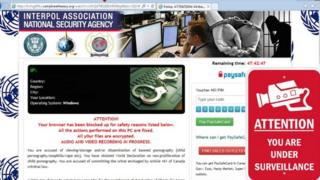 Image copyrightMalwarebytesImage caption Once a device is infected with ransomware, a false but often intimidating message appears on-screen

The advertising, apparently for a service called Sex Messenger, also contained tools for identifying whether the user was genuine rather than a bot.

The ad has now been removed.

The malware, which also made use of the security of cloud-based platforms to hide what it was doing, worked by directing the user to a fraudulent page once it had determined that they were running Microsoft's Internet Explorer and had identified the device's security settings.

So-called "malvertising" often installs ransomware on to a victim's machine. It loads a page containing false accusations of criminal activity and instructions for paying a fine.

"These efforts ensure that only real users will get to see the exploit kit landing page therefore excluding honeypots and security researchers alike," wrote Malwarebytes security consultant Jerome Segura in a blog post.

Although in this case the ad was popping up so often that researchers were able to study it after all.

"There's this idea that adult sites are more dangerous to visit than 'regular' sites," he told Tech Week Europe.

"I don't believe it's entirely true especially for the top sites because they do dedicate a lot of resources to fighting fraud and malware.

"Based on what we have seen in the past months as far as malvertising goes, we have seen just as many top mainstream publishers as pornographic ones."

The firm that distributed the ad has now taken it down.