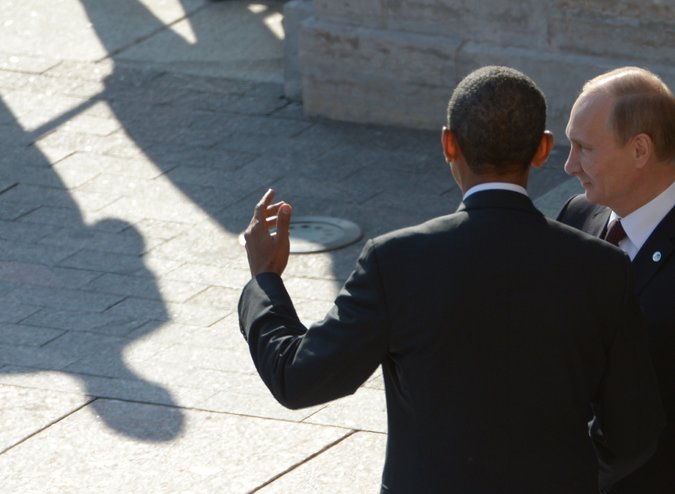 WASHINGTON — In case anyone had doubt, the White House wanted it known on Thursday that it was President Vladimir V. Putin of Russia who asked to meet with President Obama, not the other way around.

Mr. Putin was not just eager for a meeting, said Josh Earnest, the White House press secretary, but in fact “desperate” for one.

The emphasis on who wanted to meet more underscored the sensitivities and risks of the meeting, which the White House officially announced on Thursday. Mr. Obama has not seen Mr. Putin in nearly a year, and the two have not had a formal sit-down meeting in more than two years, before Russia annexed Crimea and intervened in eastern Ukraine.

“It is fair for you to say that based on the repeated requests we’ve seen from the Russians, that they are quite interested in having a conversation with President Obama,” Mr. Earnest said. Ultimately, Mr. Obama decided “that it was worth it at this point to engage with President Putin in a face-to-face meeting to see if the interests of the United States could be advanced.”

The meeting, to be held in New York on Monday, where both will be attending the annual session of the United Nations General Assembly, presents a challenge to Mr. Obama. Aides said Mr. Obama would press Mr. Putin to live up to a cease-fire in Ukraine and test his intentions in Syria, where he has recently dispatched combat jets, tanks and other military equipment.

Officials said they hoped to explore a settlement of Syria’s four-year-old civil war without leaving in power President Bashar al-Assad, a longtime Russian ally. But they said Mr. Putin’s deployment to Syria seemed to be an effort to make himself a player again on the international stage and change the subject from his encroachment in Ukraine.

“It’s a tough one for Obama,” said Fiona Hill, a former national intelligence officer on Russia who is now at the Brookings Institution. “He has to meet with him given the circumstances. But it’s not very clear what we’re going to get out of it. The Russians have made their position crystal clear: They want to have a central say about what happens.”

The announcement ended a debate inside the administration about whether a meeting might reward Mr. Putin for disruptive behavior. In the end, officials indicated, Mr. Obama decided to take that risk in part because Mr. Putin is the only real decision maker in Russia and any resolution in Ukraine or Syria depends on him.

But the White House seemed to go out of its way on Thursday not to show deference. At one point during his daily briefing, Mr. Earnest noted Mr. Putin’s habit of slouching while meeting with counterparts, pointing to a recent photo of him with Israel’s prime minister.

“President Putin was striking a now-familiar pose of less-than-perfect posture and unbuttoned jacket and, you know, knees spread far apart to convey a particular image,” he said.

White House officials said the core message of the meeting would be Mr. Obama’s insistence that Russia live up to the terms of the cease-fire in Ukraine negotiated in Minsk, the capital of neighboring Belarus. But Mr. Earnest said the meeting would not undermine international solidarity against Russian actions in Ukraine. “That’s not going to change because of one in-person conversation,” he said.

The Kremlin has continued to provide military support to separatists in eastern Ukraine, and few observers expect the Minsk peace agreement to be fully put in effect in the coming months.

Benjamin J. Rhodes, a deputy national security adviser to the president, said the meeting would also allow Mr. Obama to assess whether the two sides could collaborate against the Islamic State terrorist group in Syria, also known as ISIS or ISIL.

“President Obama will seek to understand what the Russian government means when it states it is enhancing or increasing its military involvement in Syria in order to enhance efforts to counter ISIL,” Mr. Rhodes said.

The last time Mr. Obama and Mr. Putin had a formal, scheduled meeting was in June 2013 in Northern Ireland on the sidelines of a meeting of the Group of 8 powers. Mr. Obama canceled a summit meeting with Mr. Putin that fall after Russia gave shelter to Edward J. Snowden, the former National Security Agency contractor who leaked documents.

After Russia’s intervention in Ukraine, it was kicked out of the Group of 8, and Mr. Obama’s contacts with Mr. Putin were limited even further to occasional telephone calls and passing encounters, such as brief words they exchanged on the sidelines of two international economic summit meetings last November in China and Australia.

But through it all, Secretary of State John Kerry has remained in regular contact with his Russian counterpart, Foreign Minister Sergey V. Lavrov, and American officials credited the Russians with playing a mostly helpful role during multinational negotiations that led to the recent nuclear accord with Iran.

Russia’s decision to begin a military buildup in Syria at an air base south of Latakia, including the deployment of Su-25 Frogfoot ground-attack planes, has increased the Kremlin’s leverage for a potential political settlement.

Russian diplomats have asserted in closed-door meetings with Western officials that they are not wedded to Mr. Assad’s continuing as Syria’s president. Obama administration officials hope that they can eventually persuade Moscow to withdraw support for Mr. Assad and encourage a political transition in which he would leave power. But the effort to elicit Moscow’s cooperation on Syria, including a May meeting between Mr. Kerry and Mr. Putin in Sochi, Russia, has yet to bear fruit.

Mr. Putin left his bottom line unclear in an interview with Charlie Rose for “60 Minutes” on CBS. “There is no other solution to the Syrian crisis than strengthening the effective government structures and rendering them help in fighting terrorism,” he said. “But at the same time, urging them to engage in positive dialogue with the rational opposition and conduct reform.”

The doubts in the administration were voiced on Thursday by Defense Secretary Ashton B. Carter, who said he remained unsure whether American and Russian interests truly converged on Syria.

At a news conference with the Ukrainian defense minister at the Pentagon, Mr. Carter expressed worry that Russia may use its military buildup to indiscriminately attack Syrian rebels who oppose Mr. Assad, a move he compared to “pouring gasoline” on the war there.

“We will continue to work with Russia on issues where our interests overlap,” Mr. Carter said. But he added, “It is possible but not yet clear that such an overlap might exist in Syria.”

An earlier version of this article misstated the location of the last formal, scheduled meeting between President Obama and President Vladimir V. Putin of Russia, in June 2013. It was Northern Ireland, not Ireland.